How Grassroots Initiatives are Spanning The Civilian-Military Gap

There’s been a lot of press on the breaking down of the civilian-military relationship in America. I speak here not... 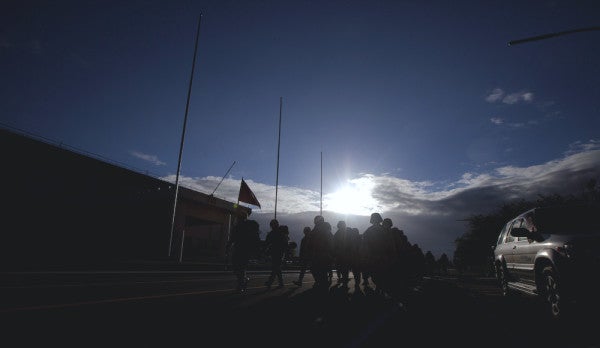 There’s been a lot of press on the breaking down of the civilian-military relationship in America. I speak here not of the inherent friction between those providing civilian oversight and control of the military and the leaders in the Pentagon and the regional combatant commands around the world. Instead, I want to address a more positive aspect of the interaction of civilians and the military — that between our service members and their civilian peers. This interaction comes in multiple forums, from writing to organizing, to daily interactions, and will be the most successful path to re-engaging the civilian-military relationship in America.

There are many blogs by military members talking about their service, their struggles, and their aspirations — many of them have been published here on Task & Purpose, including Don Gomez from Carrying the Gun, Crispin Burke from Wings Over Iraq, Andrew Steadman from The Military Leader, and Joe Byerly who writes at From the Green Notebook. There are also numerous groups of service members and veterans striving to understand, and help their peers to understand, the joys, dangers, and loss of war. Forums such as Words After War and Red Bull Rising encourage veteran authors to write their experiences, while those like War Stories and the Atlantic Council’s Art of Future Warfare project provide opportunities to envision the future through military and civilian experiences over the last decade.

Moving out of the digital realm, there are organizations and events created by service members to leverage their skills and build relationships with their civilian counterparts. Such organizations include the Defense Entrepreneurs Forum, which was developed to fuse the energy, cognitive surplus, and innovative ideas of younger military members and their civilian peers. Together, they can help develop practical solutions to today’s (and tomorrow’s) most important national security challenges. Ideas from this previously relatively, untapped well could enable more flexibility for senior decision makers, a process that would undoubtedly increase the sense of buy-in, empowerment, and impact that men and women brimming with valuable tactical and strategic contributions from overseas and here at home.

In the veteran space, organizations like the Iraq and Afghanistan Veterans Association, Team Red, White, & Blue, The Mission Continues, Got Your 6, Team Rubicon, and Wear Blue: Run to Remember have redefined how our military members and veterans communally overcome more than a decade of war, enjoy interactions with their brothers and sisters in arms, and shape their relationships with society at large.

Finally, as has been the case since World War II, service members and veterans interact every day with their civilian peers on college campuses across the country, and even around the world. Students interact in classes covering everything from basic biology at a local state school to war studies. The development of formal mechanisms for universities to provide an exchange of perspectives between service members and the future leaders of the country is one way to expand these relationships. William & Mary’s military fellowship with the Project on International Peace & Security offers an excellent example.

Even more importantly, many of these schools have veteran and military groups that provide space for civilian-military interactions, as well as leading conversations on what it means to serve in the military, what it is like to combat post-traumatic stress, and how service members intend to give back after serving in uniform.

Are all of these grassroots endeavors having an effect? Some believe that the civilian-military gap cannot be bridged without institutional support. Others believe that any rift between civilians and service members cannot truly be mended until there is a more equal national service culture in the country. I disagree with both of these stances, though I support both approaches and what they’re trying to achieve. Not every problem in our society requires national oversight or the influence of institutions.

In fact, with the almost innumerable foreign policy, budgetary, and domestic issues facing the Obama administration and Department of Defense today and into the next few years, it will be very difficult for these issues to gain momentum within the Beltway and in official channels alone — it is up to the grassroots efforts to span the gap between military members and civilian society at large. This will not only be critical for increasing understanding amongst the different segments of American society, but to give a purpose to military service members that are finding it difficult to find direction in the current strategic context.

The next step is for these organizations to partner with each other, to grow, and to organically create symbiotic relationships of action-minded groups using their networks to positively drive their relationships with their civilian counterparts. These joined networks will not only talk about overcoming the civilian-military gap created by the last decade or so of national and military policy, but will also actively engage the public and drive toward a deeper understanding of national service. The development of this next generation of relationships will truly reduce the gap between the military and society at large.