Every year, hundreds of Reserve Officer Training Corps cadets travel the globe as part of the Army’s Cultural Understanding and... 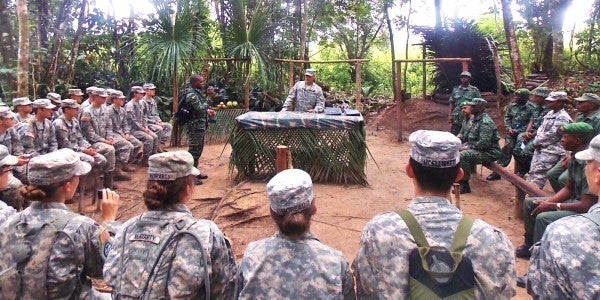 Every year, hundreds of Reserve Officer Training Corps cadets travel the globe as part of the Army’s Cultural Understanding and Language Proficiency Program. They spend up to three weeks immersed in foreign cultures, learning more about how others around the world view the United States, and in the process, learn more about themselves.

This isn’t a run-of-the-mill study abroad opportunity; cadets are fully immersed in foreign cultures and spend their time interacting and building relationships with their peers. They are engaging in cultural diplomacy.

The Army recognizes the need for young leaders to develop more cultural awareness and foreign language proficiency skills. Now more than ever, cultural awareness training is a vital component to the ROTC curriculum. These immersion opportunities — available in 40 countries — expose cadets to everyday life in different cultures and intensify language study, which helps develop officers with the necessary language and cultural skills to support global operations. Furthermore, service members gain valuable leadership skills as they learn to cooperate across diverse teams.

Cadets participate in a variety of exchanges during their tours, including humanitarian service, military-to-military contact, and education on the social, cultural and historical aspects of the country. In 2014, 1,320 ROTC cadets participated in the program. The future goal is for at least half of all cadets to complete an immersion internship annually.

I advocate for a more aggressive goal of 100% participation. Recognizing logistical and budgetary realities, it wouldn’t necessarily need to be a three-week immersion; there would still be immense benefit to shorter-term opportunities of cultural exchange. Immersion into foreign cultures exposes cadets to the realities that other countries have vastly different lifestyles, economic standing, and world perspective. It’s a simple premise, but would go a long way in preparing our young soldiers for the reality of a future of joint operations. Beyond the cultural training, the direct coordination and teamwork that emerges from these exchanges helps cadets to develop useful cross-cultural collaboration skills that can’t be taught in a classroom.

The cross-cultural collaboration skills that soldiers gain are uniquely useful in helping them grow as leaders. The U.S. military is increasingly diverse, with more races, ages, and socio-economic backgrounds represented each year. The leadership skills cadets gain in the field, by working with diverse teams, are directly transferable to the diverse teams they will surely lead as new officers.

Cultural diplomacy is built upon mutual understanding through cultural exchange. In essence, exactly what the cadets are engaged in each summer. The ultimate goal of cultural diplomacy is to instill positive perceptions of the U.S. abroad, but the benefit of mutual understanding is, I think, more significant. Through these types of meaningful exchanges, American service members will learn more about foreign audiences and potential future partners, and as a bonus, create favorable views of the United States in the process. Such favorable views are instrumental on a micro and a macro level to the future success of the force. On a micro level, they help to foster positive relationships for service members engaging with foreign peers. On a macro level, they set the foundation for multinational cooperation on joint missions.

If the United States wants to cultivate a better image of itself overseas — a worthwhile ancillary goal to garner support for our objectives—extending foreign exchange programs and exposing foreign publics to American values through cadets would go a long way. As the State Department, describes, cultural diplomacy helps create a foundation of trust with other peoples, which policymakers can build on to reach political, economic, and military agreements.

Our military engagements are increasingly multilateral and having a common basis of understanding is a great benefit. The relationships that the cadets make with their peers from other armed forces will be immensely beneficial to their future careers, particularly when carrying out missions with foreign partners.