Battlestar Galactica Has Great Parallels To The Modern Military

I grew up watching the original Battlestar Galactica. What kid wouldn’t enjoy watching dogfighting spaceships, not to mention a robotic... 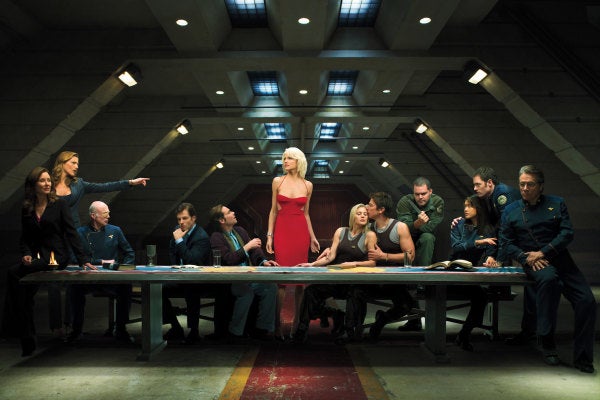 I grew up watching the original Battlestar Galactica. What kid wouldn’t enjoy watching dogfighting spaceships, not to mention a robotic dog? Dogs are great and robots are great — putting them together is awesomeness squared. What was there for a 7-year-old not to love? Unfortunately, the series was short-lived, though a Viper with an actual firing laser torpedo remained my prized toy far longer.

In 2004, the Syfy channel rebooted the series. While there was some controversy about ancillary issues, like Starbuck being played by a woman, the new Battlestar Galactica successfully brought the battle between humans and the Cylons into a new millennium, one far more complicated than the one that preceded it.

Battlestar Galactica went beyond the usual space opera tropes and did what good science fiction has done for generations, from Jules Verne to Star Trek — it took the issues of the day into outer space, stripping them of the controversy of the moment, and allowing us to look at issues from a different perspective.

Under pressure, people exhibit both the best and worst of the human condition. There is the extraordinary courage of the Viper pilots going out to fight the Cylons every 33 minutes for days on end as the fleet executes a fighting withdrawal, going on despite pain and casualties. But there is also the cowardice of Gaius Baltar, a prominent scientist who repeatedly betrays his fellow humans to please his hallucinated Cylon lover.

The president of the Twelve Colonies, Laura Roslin, a paragon of principled leadership, is forced to repeatedly compromise her principles in order to safeguard the human race. She must constantly choose the lesser of two evils for the sake of survival. Much as with many real political leaders, her constituents do not appreciate the magnitude of the challenges she has led them through or the difficulty of the choices she faces daily.

On a deeper level, fear breeds paranoia and discontent, and the populace turns to anyone who can air their grievances. A race for vice president turns into a bitter race between former terrorist Tom Zarek, played by Richard Hatch of the original series, and Baltar, a demagogic traitor. Scared people run toward security, even if it’s a false security. Sound familiar?

Wars are never clean affairs, and Battlestar Galactica brought that into clear relief on several occasions. When the survivors in the Galactica fleet encounter the Pegasus, another battlestar, they are initially relieved. They have finally found reinforcements. They are soon disgusted by the tactics of their apparent saviors, as they discover that the Pegasus’ leadership is willing to run roughshod over citizens’ rights to maintain order and would rather have revenge on the Cylons than survival. As with the current War on Terror, the good guys often find themselves wondering what victory is worth if human values are sacrificed to win it.

This theme recurs often in the series. The perfect solution doesn’t exist. So how do leaders balance their values against mission accomplishment? Where is the point of no return?

At one point, colonial forces capture a Cylon and brutally torture him to obtain information, reminiscent of American treatment of terrorist suspects. They are also presented with the opportunity to use what might be termed biological warfare in today’s lexicon, a tactic that might win the war, but in the end are stymied in the attempt by a crisis of conscience in one of the key players.

Later in the series, the humans are subjugated under Cylon rule after being betrayed again by Baltar. They resort to tactics of last resort to fight their oppressors, namely suicide bombings and brutal retribution against sympathizers. This reversal of fortune is an extremely effective dramatic tool. The audience rightfully identifies with the human colonial resistance, but their tactics are identical to what we today label terrorism. If one wins the battle, but loses one’s soul, is it truly a victory? But if losing the battle means that a greater evil triumphs, what choice is there?

Military viewers will enjoy the series for the way it portrays fighting with futuristic technologies while maintaining a sense of authenticity in both the fighting and the atmospherics. The space battles are reminiscent of the great naval battles of the Pacific Theatre in World War II. The lives of the pilots and crew of Galactica are almost eerily like those aboard a modern amphibious ship. Any veteran will see people from their service coming to life on screen.

Even though it has been off the air for over five years now, Battlestar Galactica is still amazingly relevant, from a moral, political, and military leadership standpoint. It’s well worth a binge-watch, whether you’re deployed or just snowed in.