4 Lessons The Military Learned In The Wake Of Hurricane Katrina 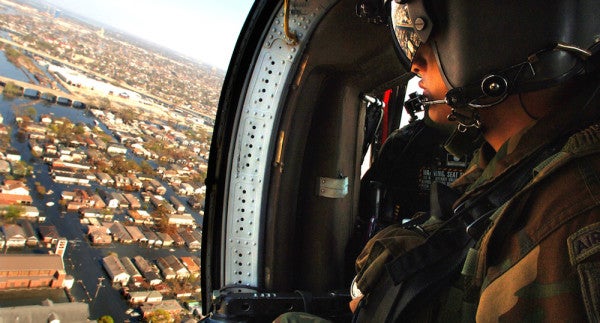 Ten years ago this week, Hurricane Katrina swept through the Gulf states, killing over 1,200 people, leaving thousands more homeless, and causing over $100 billion in damage — one of the worst natural disasters to befall the United States. Nearly 70,000 troops — active duty, Reserve, and National Guard — would eventually become involved in relief efforts, the largest effort in U.S. history, according to a study commissioned by the U.S. Army Combat Studies Institute.

I know because I was there with about 5,000 paratroopers of the U.S. Army’s 82nd Airborne Division.

Hurricane Katrina was a watershed event, leading to drastic reforms in the way the U.S. government responds to disasters. For the military, however, here were just four lessons that proved their worth not just in Katrina, but in future relief efforts.

The Pentagon has a veritable alphabet soup of computer networks, but most of them are useless for sharing information with first responders and local government officials. That’s a lesson I learned in my first days in New Orleans, when Google Earth was more useful than the military’s flight planning software, FalconView.

The lesson hasn’t been lost on the Army’s leadership either. Military and civilian responders often crowdsource their efforts, collaborating with Google products. There’s an added bonus: The Army and volunteer-relief services like Team Rubicon have found commercial software, such as Palantir, more effective than some of the military’s high-end programs.

Once the storm clouds finally passed, government officials seemed to spend more time pointing fingers than helping the people of the Gulf Coast. Of course, there was plenty of blame to be found among federal, state, and local officials. It certainly didn’t help that New Orleans is one of the most corrupt cities in America, with former mayor Ray Nagin currently serving a 10-year prison sentence for fraud, bribery, and money laundering.

The only organization that seemed to offer hope was the military. As the waters began to recede in New Orleans’ Ninth Ward, emergency responders were horrified to learn another hurricane, Rita, was barreling towards Louisiana. Lt. Gen. Russel Honoré, who by then had become the most trustworthy face in Louisiana amid the chaos, began to position the military just along the edge of the storm, ready to swoop in once Rita cleared. During a press conference, however, reporters pressed Honoré to blame New Orleans officials for the poor state of affairs in Katrina’s wake. Honoré delivered perhaps the most memorable line of the entire Katrina affair, berating reporters for focusing on the last storm instead of preparing for the next storm: “Don’t get stuck on stupid,” he said.

Even with over one-hundred thousand service members in Iraq and Afghanistan, the U.S. military still mustered tens of thousands of troops in just a few weeks. They restored power, lifted stranded residents from rooftops, and paddled through stagnant muck searching for survivors.

Honoré’s no-nonsense attitude, coupled with the military’s uncanny penchant for problem-solving, may have led some to believe the military was really in charge of cleaning up New Orleans.

But it wasn’t. Nor should it have been.

It’s tempting for the military to want to take the lead during a disaster; we’re so used to leading nation-building efforts abroad, it’s become second nature. But federal troops are only on hand to help local government get back on its feet; and even then, only in a supporting role, never in the lead.

According to the Army’s Combat Studies Institute, over 46,000 guardsmen were active in Louisiana and Mississippi in the aftermath of Hurricane Katrina, outnumbering federal troops more than 2-to-1 and exceeding the active force’s helicopter contribution.

Whereas federal assistance generally arrives in a matter of days, the National Guard can respond in just a few hours. Indeed, the National Guard is the state’s professional, go-to force for disaster relief, whether it be floods, hurricanes, wildfires, or riots. National Guardsmen have a vested interest in helping communities prepare, survive, and recover from disasters because they, too, are part of the community.

That said, each state needs a guard force properly trained and equipped to respond to contingencies both at home and abroad. (And yes, that means Black Hawks and Chinooks, not Apaches.)

As they say in the business, a disaster isn’t the time to exchange business cards. Government officials learned that lesson painfully during Hurricane Katrina, where massive communication breakdowns hampered relief efforts.

Responders at all levels of government must train for the next complex disaster. U.S. Army North, the lead agency for providing defense support for civil authorities, does just that every year during an exercise known as Vibrant Response, which simulates the effects of a 10-kiloton nuclear blast in a major American city. Training at the Muscatatuck Urban Training Center in rural Indiana, the doomsday scenario borrows heavily from the chaos that followed Hurricane Katrina.

The Army hires dozens of actors to recreate the absolute bedlam of a major catastrophe, fitting for an exercise that takes place on the grounds of an old mental asylum. Sparing no expense, the massive urban training center also features a small zoo, perhaps inspired by events during the Katrina aftermath, where apex predators loose at the New Orleans zoo merely added to the rescuers’ headaches. Better to face the difficult situations in training than to encounter them for the first time during a real disaster.