Military Culture Has A Terrible Habit Of Blaming The Victim

One night, I was walking home from a sports bar, and two dudes attacked me. My jaw was broken in... 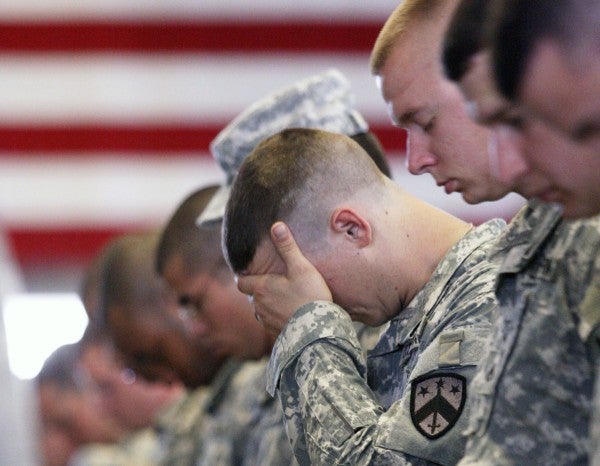 One night, I was walking home from a sports bar, and two dudes attacked me. My jaw was broken in two places and my wallet was taken.

I lived in a quiet little Navy town in the state of Washington where no one thought this kind of stuff happened. It was the night after my last deployment. I had had a few drinks, but literally a few, over several hours while I watched baseball highlights and ate chicken wings. I left after a couple cups of water without even a buzz. I don't know who the people were or where they came from. I don’t remember seeing them inside. They were light-skinned, probably white.

When I returned to work awhile later, I read an e-mail that my commanding officer had sent the day after my attack. It said, with slight paraphrasing, “We've known this kind of stuff was going on in this neighborhood for some time now. It is never a good idea to go out alone at night.”

The e-mail made me sick. Neither I nor my friends knew anything about people being attacked in our neighborhood. How many victims had there been, and how many were there going to be in the future, before we were going to be made aware? I felt betrayed by the tone and the after-the-fact information, and it was also clear to me that someone thought I was, at least in some way, responsible for being violently attacked.

Many American civilians are shocked when they learn how the military treats victims of assault, specifically sexual assault. A particularly heinous and underreported national crime is somehow made worse in the U.S. armed forces, where victims are systematically doubted, shunned, and if that doesn't do the job, cast out from their military family. All because the thought of a few rapists in our midst is scarier and less plausible than a bunch of crazy people crying “rape.”

Twenty-six thousand active-duty service members reported some form of sexual assault in an anonymous 2012 survey by the Department of Defense. That same year, the DoD put the number of reported sexual assaults at 3,374.

If they choose to report it, many of the victims (male or female) are given false medical diagnoses as a pretense for removing them from the military, often times with other-than-honorable discharges that strip them of their benefits. Once removed, they face a blind, uphill battle to find employment and receive adequate mental and medical care. Because they were raped.

There is a powerful current of victim blaming that runs through the ranks of our military. It is a part of who we are, introduced to us by an American culture that makes us question the weak while preaching personal responsibility. It is reinforced by our training. Then, in a pinch, it's used to keep people from upsetting the applecart with the truth.

I've always felt some small sense of shame and culpability for what happened to me. In my mind, I know I didn't do anything wrong, and I definitely didn't do anything to deserve being beaten so violently for the $20 in my wallet. Yet, the questions and suspicions of a few people make me feel guilty, like I need to explain the circumstances in detail to prove that I wasn’t at fault.

My attackers took something from me that night. Despite surgery and having my jaw wired shut for several weeks, it never healed correctly, and I was left with a crooked jaw that has resulted in years of headaches, muscle tension, and circulatory problems, among other issues. I'm in pain every day and my life has never been the same. While I can't say my mugging compares to being a victim of rape, I feel I've developed some understanding of what they go through. It's made me think twice about the way I question people, the way I think about victims and accused aggressors, and what my role is in perpetuating this destructive culture of victim blaming.

I’ve realized that, without much consideration, it seemed common sense to me that women aren't supposed to be out too late, be out alone, or be out in shady places. And I never before realized what a terrible, authoritarian thought process that was until I was told I had to live it.

That I shouldn’t go out late at night to grab dinner enforced the idea that I should let someone else’s possible actions police my decisions. And it was the thought that I should live like a woman. I was thinking, “I’ll do what I want, I’m an adult,” but the thought might as well as been, “I’m a man.”

Not that being a man would make me less likely to be raped in the military. The majority of sexual assault victims in the military are actually men. And, according to a 2013 New York Times report, these assaults often go unreported for fear of being punished, ignored, ridiculed, or even discharged for sexual contact with another man (prior to 2011).

For years, the military has accepted this terrible behavior as the status quo. We’ve accepted it. Through our words, our deeds, or our lack of action, we’ve let people commit these awful crimes while the guilt and punishment has fallen on the wrong people. It’s time that we stop turning a blind eye to assault and start promoting not only a culture of prevention, but also a culture of awareness.