“Jody” is an actual dude who exists and he briefly lived in a deployed service member's house and stole some... 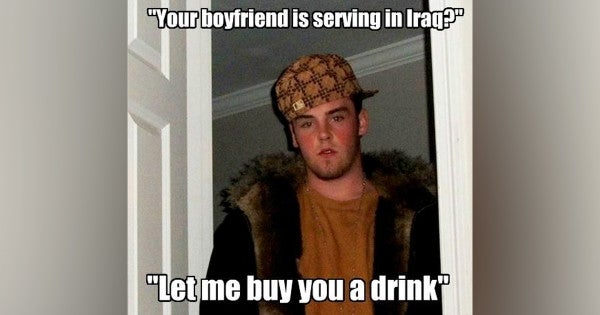 “Jody” is an actual dude who exists and he briefly lived in a deployed service member's house and stole some of his shit, according to The Montana Standard.

“I was not out to harm a man that served our country,” Hunt said in court, according to The Standard.

Though he didn't steal anyone's girlfriend, 39-year-old Erik Hunt was sentenced to 15 years for squatting in a soldier's home, stealing and selling his stuff, and going on a crime spree after that for good measure.

The literal Jody tried to explain that he and his girlfriend were homeless and just needed a place “to get warm,” according to AP. However, he stayed warm for about two to three weeks all while simultaneously pulling a royal dick move by selling off the televisions and tools of a guy half a world away in Iraq, completely oblivious.

After his initial arrest Hunt worked out a plea deal for five years in jail, but that went down the toilet after he was released from jail and a couple weeks later decided to steal a truck and items from the local Kmart, Walmart, and Universal Athletic — all while carrying around meth.

On a positive note, at least Hunt is no longer homeless.

WATCH: Mattis: 'If This Was Vodka, It Would Be A Lot Better Speech'