Why Is The Military Getting Involved In The NFL’s Domestic Violence Scandal?

As Domestic Violence Awareness month approaches next week, the National Football League continues to take heat on what exactly its... 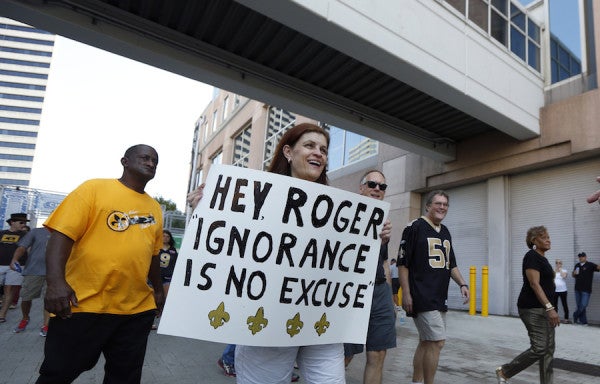 As Domestic Violence Awareness month approaches next week, the National Football League continues to take heat on what exactly its policy is on domestic violence. It would appear until late, it didn’t really have one. On Friday, Sept. 26, NFL Commissioner Roger Goodell announced that the NFL would be talking to the U.S. Army about how to handle the issue. This comes after a statement from the Department of Defense that it is reconsidering the depth of its relationship with the NFL. Pentagon Press Secretary Navy Rear Adm. John Kirby emphasized that the Pentagon is not conducting a full investigation of the league, but inquiring about the “interaction” between the two organizations. Kirby stated that the DoD has “high expectations” for any of its working partners — high expectations the military no doubt hopes to achieve itself as it has recently come under sharp scrutiny for how it handles sexual assault cases.

While at first it might seem strange that the military has anything to do with NFL policies or its public relations scandals, the two organizations actually have a long and important relationship. Football fans are a demographic the military cares about for recruitment; the U.S. Army alone spends $10 million per year on advertising. The NFL in turn supports wounded warrior programs, and allows the military to conduct flyovers at games. The two organizations have also worked together to research and improve awareness of traumatic brain injuries in players and soldiers, exchanging information and medical research.

The military has always grappled with domestic violence within its ranks, but has moved to adopt programs such as the Family Advocacy Program over the years to try and combat it. Between 2002 and 2004, at Fort Bragg alone, there were 832 victims of domestic violence, and within a six-week period, four women were killed by their partners/husbands. Military leadership found it had a significant problem: Domestic violence was more common within the military than the civilian world and received heavy criticism from the public for it.

The DoD took many steps to counter the domestic abuse problem within the military, including the establishment of Case Review Committees, which “coordinate medical, legal, law enforcement, and social work assessment, identification, command intervention, and investigation and treatment functions from the initial report of spouse or child abuse to case closure.” The committees determine whether the case can go forward for prosecution and what options the commander has in punishment. The Family Advocacy Program and Case Review Committees do a lot of work in prevention and training as well. The purpose of both of these organizations for the U.S. Army is to help families before abuse occurs by conducting training on military installations and offering counseling.

These are likely some of the resources the military will be sharing with the NFL as the league has primarily dealt with abuse cases as a public relations problem with policies that seem reactionary rather than preventative. The league’s punishments are dealt with on a case-by-case basis with the commissioner acting as judge and jury within a system that is neither sufficient nor fair. Goodell was criticized for not taking enough action against Baltimore Ravens player Ray Rice when he gave him only a two-game suspension. In July, this was deemed “significant” but “fair” punishment by the Ravens’ general manager. Then the video of Rice knocking out his then-finance inside an elevator went public and it became a public scandal, which seemed a better motivator than Rice’s actual arrest. The Ravens terminated Rice’s contract, Goodell admitted that he “didn’t get it right,” and announced a change in Rice’s sentence to an indefinite suspension from the NFL. While the punishment is more robust now, it does little to address the core issues facing the NFL.

The truth is, if the video had not been released of Rice violently punching and then dragging Janay Rice out of the elevator that morning, very few of us would probably know the details of this NFL domestic-abuse case and Rice would have went back to football after two games. We probably wouldn’t have paid too much attention to the other three cases that have recently gone public either. The video has seemingly served as a window into an issue that has everyone shocked, but it is neither extraordinary nor rare. It happens every day and all around the world, with one in four women and one in seven men in this country alone experiencing sexual and/or physical violence at the hand of an intimate partner. According to the World Health Organization, globally, as many as 38% of all murders of women are reported as being committed by intimate partners. Domestic abuse actually happens at a rate higher than the “…combined number of automobile accidents, stranger rapes, and muggings that women experience” in the United States.

It’s not an NFL or military problem, it’s everybody’s problem.

The only silver lining of this situation is that the video and these recent scandals have people talking about the larger issue at hand here. The Army has come under a lot of criticism for how it handles its own assault cases, but in the least, the military has done a lot of work on the prevention side rather than simply reacting. Hopefully this is a lesson learned that it can pass onto the league.