History doesn't repeat itself, but it often rhymes. 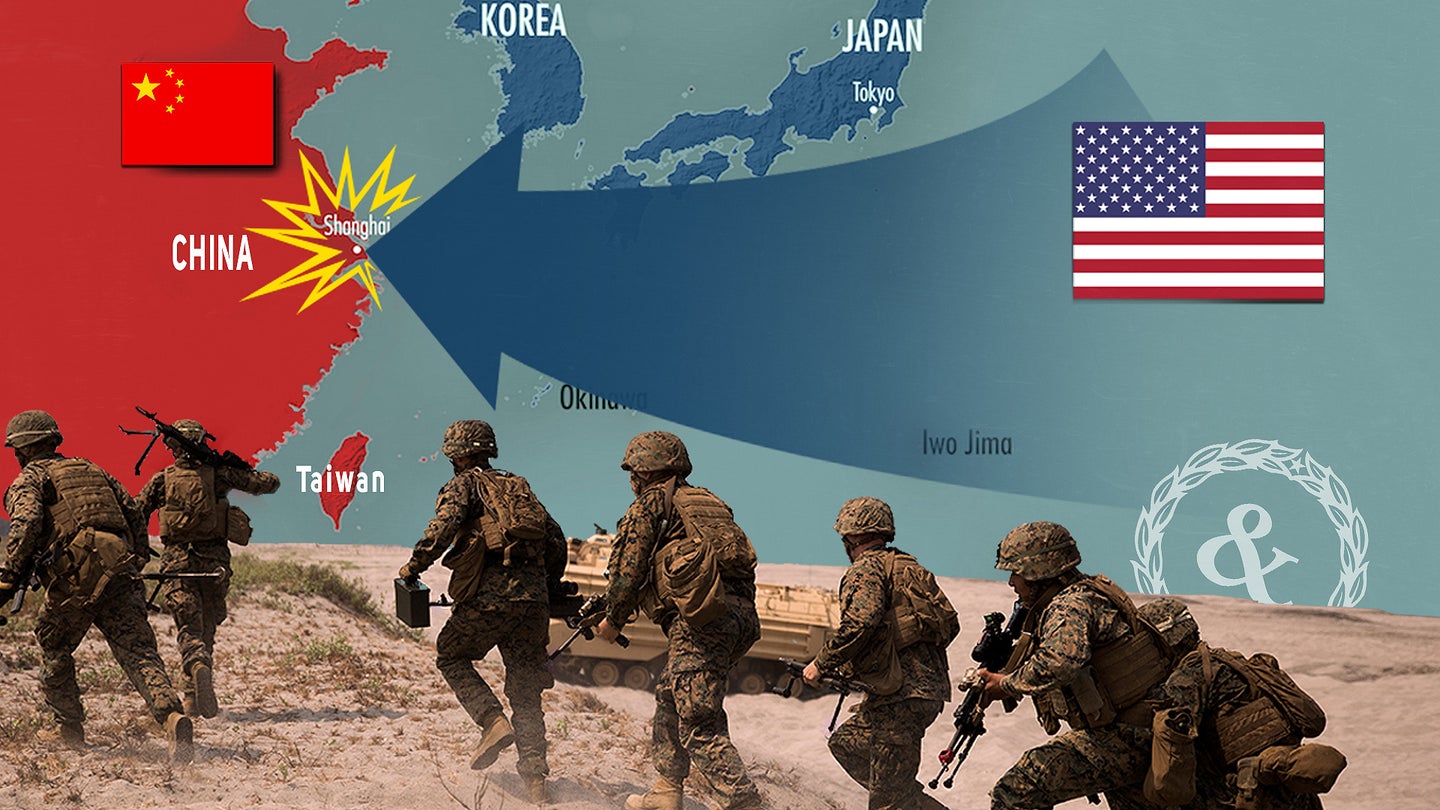 In a war against China, tiny islands could become strategic strong points for the U.S. military’s advance across the Pacific Ocean for the first time since World War II.

The Marine Corps’ Expeditionary Advanced Base Operations concept, for example, calls for putting small numbers of forces on “a series of austere, temporary locations ashore or inshore,” an August 2021 Marine Corps story explaining the concept says. The story includes a diagram showing how Marines would move from ships onto islands using MV-22B Ospreys and CH-53 heavy-lift helicopters.

Once again, U.S. troops could be called upon to land on East Asian islands if a war with China broke out, Task & Purpose has learned.

But there are also several key differences between the island-hopping campaign from 1942 and 1945 and how the U.S. military would respond to a Chinese invasion of Taiwan, which is often cited as the likeliest scenario that would spark a war between the United States and China.

Rather than invading and clearing islands such as Saipan and Tinian, U.S. troops would likely set up airfields and air defense systems on them and then defend those islands against Chinese air and missile attacks, said Dean Cheng, a China expert with the conservative Heritage Foundation think tank in Washington, D.C.

“These are islands that aren’t even defended,” Cheng told Task & Purpose. “It’s an interesting way of thinking about it: Island hopping, not so much storming the beaches of Iwo Jima as trying to keep an airbase open,” Cheng said.

First, however, U.S. ships and troops would have to fight their way across the Pacific Ocean, and they would likely take casualties along the way, Cheng said. Just to get from Hawaii to Guam, U.S. forces would have to brave Chinese DF-26 intermediate ballistic missiles, air-launched cruise missiles, submarines, and possibly Chinese merchant ships armed with missiles.

Chinese special operators could infiltrate Saipan and other islands before U.S. troops landed to provide reconnaissance, identify targets for missile strikes, and even launch their own attacks on airfields to kill as many pilots and maintainers as possible, he said.

“The Marines lost more aircraft and aircrew in Afghanistan from that one attack on the airbase than in all of the fighting of the previous seven years,” Cheng said, referring to the Taliban’s 2012 attack against Camp Bastion, which killed two Marines, injured 17 others, and severely damaged six AV-8B Harriers and one C-130.

During World War II’s island-hopping campaign, soldiers, Marines, and sailors had to annihilate Japanese resistance on a series of progressively better-fortified islands.

The Marine Corps in particular faced hard fights on Pacific islands such as Iwo Jima, where nearly 7,000 Marines were killed and another 20,000 were wounded in the bloodiest battle in the Corps’ history.

When Task & Purpose asked the commander of Marine Corps Combat Development Command in February how many U.S. troops would be killed and wounded in a war against China, he indicated that he did not expect the number of casualties to rise to World War II levels.

“We’re not doing an Iwo Jima again, right – that needs to be clear,” said Lt. Gen. Karsten Heckl, who is also deputy commandant for combat development and integration. “It’s not what we’re talking about.”

Instead, Marine Corps Commandant Gen. David Berger’s plan to redesign the force calls for Marines to operate from Expeditionary Advanced Bases inside the range of enemy missiles and other defenses.

The term “Expeditionary Advanced Bases” is intentionally vague so that adversaries cannot be sure which forces are ashore and which are embarked on ships, according to a 2018 Marine Corps Warfighting Lab, Concepts & Plans Division paper about the concept.

“Historically, advanced naval bases have frequently been found astride straits or on islands,” the paper says. “It is appropriate to think of future EABs being similarly situated, but the expeditionary advanced ‘base’ is purposefully ill-defined in terms of its perimeter and specific geographic location. ‘Amorphous’ is an apt description of how we wish EABs to appear to adversaries.”

The Expeditionary Advanced Base Operations concept envisions small numbers of Marines managing to operate undetected from islands, from which they can fire anti-ship missiles, collect intelligence, and possibly coordinate long-range strikes from ships and aircraft, said Stacie Pettyjohn, director of the defense program at the Center for a New American Studies think tank in Washington, D.C.

Unlike World War II, the Marines would not have to fight for the islands that they would use as bases, and they would likely come ashore in small units such as companies rather than divisions, Pettyjohn told Task & Purpose. The Marines would also not occupy islands indefinitely.

“They might want to be on an island for a while because they want to control this particular water or be able to have the ability to keep controlling it, but they would be trying to move around and make sure that they are hidden and hard to target,” Pettyjohn said.

Should the United States go to war with China, the Marines could try to establish expeditionary bases in the Philippines or on the Ryukyu Islands between Taiwan and Japan, she said.

“They’re not going to be able to reach Taiwan itself, but those are chokepoints and gateways to the broader Pacific, where they might want to bottle up the Chinese fleet and make sure the PLAN [People’s Liberation Army Navy] doesn’t get out into the open ocean, where it could move towards Guam and Hawaii and the West Coast,” Pettyjohn said.

While the Marines are looking at how they could occupy islands as part of a future military campaign, it is clear they want to avoid any comparisons to the Corps’ bloody slog through the Pacific in World War II.

“Force Design 2030 is an iterative process and through our campaign of learning we are developing a host of capabilities that will support the Joint Force throughout the world,” Stenger said. “A future conflict will require a Marine Corps that can conduct distributed operations, while sensing and making sense of the operating environment for the Joint Force.”

“In the future, MEUs will possess both traditional and Expeditionary Advanced Base capabilities that can deploy with non-standard Amphibious Ready Groups,” Stenger said.

It’s also worth noting that there is a popular saying: History never repeats itself, but it often rhymes. In that vein, there are some parallels between Expeditionary Advanced Base Operations and World War II, if not the island-hopping campaign, specifically.

Navy strategy expert Steven Wills said he sees similarities between Expeditionary Advanced Bases and the Marine Corps’ base defense forces on Wake Island and Midway in 1941 and 1942.

At Wake Island, for example, the Marines had 5-inch naval guns and a few aircraft to attack the Japanese, said Wills, a retired Navy lieutenant commander who is now with CNA, a federally funded research and development center.

“The Marines envision today an aviation component to Expeditionary Advanced Base ops and some sort of a modern artillery component – in this case, surface-to-surface cruise missiles: some way that they can get into a maritime fight and sink ships, create strongpoints that an opponent’s maritime forces would have to go around or engage,” Wills told Task & Purpose. “I think that looks a lot like those base defense forces that were created before the Second World War. The Marines haven’t strayed too far from the heritage here. They’ve just got more modern concepts and systems to go with it.”