At an event in southern England commemorating the 72nd anniversary of D-Day, the massive amphibious assault on Normandy in World... 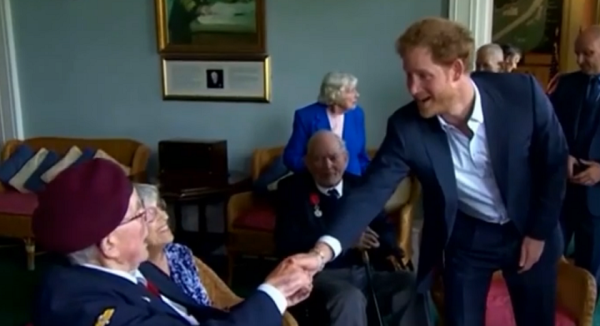 At an event in southern England commemorating the 72nd anniversary of D-Day, the massive amphibious assault on Normandy in World War II, on June 2, Prince Harry showed up slightly underdressed, wearing a suit jacket and dress shirt without a tie, and was immediately called out by one of the 45 D-Day veterans in attendance.

When he approached 91-year-old Ivor Anderson, a sapper who served in the 591 Para Squadron Royal Engineers, the prince’s was corrected by the salty, war-tested veteran, reports Inside Edition.

“Where's your tie?” Anderson asked Prince Harry, who also served in the British Army. “Come on, get your bloody tie on.”

The prince played it off, saying “I know. I was told not to wear a tie and then you're all wearing ties. I'm underdressed.”

Later, Anderson said he offered Harry his spare, but the prince declined, saying he couldn’t wear it because he didn’t have his wings, referring to the parachutists wings on Anderson’s tie.

The event took place in the Southwick House in southern England, the same building where Gen. Dwight D. Eisenhower planned the D-Day invasion, that ultimately changed the course of World War II. The event is part of an annual pilgrimage to France for D-Day veterans and is put on by the charity, D-Day Revisited.

In Prince Harry’s defense, he realized his mistake the moment he arrived.

“Are they all wearing ties in there?” Prince Harry asked John Phipps, the founder of the D-Day Revisited, according to The Telegraph. “I should have worn a tie. Oh well, it's too late now.”

Prince Harry has his own experiences in the military. He served in combat in Afghanistan as an Apache helicopter pilot, and earlier this year revealed that he struggles with Afghan War flashbacks. In 2014, the prince founded the Invictus Games, an international sporting event for wounded combat veterans.

Watch the video by Inside Edition below.