Gunmen Try To Rob McDonald’s Where Special Forces Are Eating

When two armed men entered a McDonald’s in Besançon, a city in Eastern France near the border to Switzerland, they... 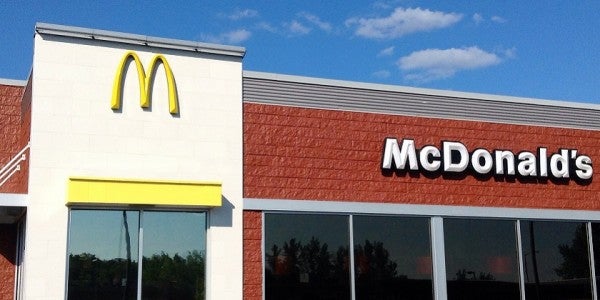 When two armed men entered a McDonald’s in Besançon, a city in Eastern France near the border to Switzerland, they bit off more than they could chew.

On June 5 two robbers in their mid-20s entered the fast food chain, fired a shotgun into the air, and began directing employees to empty the register, which contained roughly $2,270 in cash, reports Agence France-Presse.

Related: Check Out How This Vietnam Vet Defended A Waffle House From A Would-Be Robber »

Approximately 40 customers were in the restaurant, among them 11 highly trained and armed members of the French paramilitary special forces, Groupe d’Intervention de la Gendarmerie Nationale, or GIGN.

Unfortunately for the robbers, the off-duty officers eating at the restaurant were experts at dealing with situations exactly like this.

The GIGN was founded in the aftermath of the 1972 Olympic games in Munich, when Israeli Olympians were taken hostage and eventually killed, reports The Washington Post. The group specializes in counterterrorism, organized crime, hostage rescue, and protecting government officials.

To avoid collateral damage, the GIGN officers waited until the robbers made their escape before making their move. When one of the gunmen tripped on his way out the door, they pounced.

The GIGN officers apprehended the first robber without firing a shot. The second wasn’t so lucky. After refusing to drop his weapon, the second robber pointed it toward the officers and was shot in the abdomen.

“During the hold-up, the gendarmes didn’t do anything,” said local prosecutor Edwige Roux-Morizot in an interview with Telegraph, referring to the elite unit the men belong to. “It was out of the question to use their weapons, as this would have created difficulties and could have placed many people’s lives in danger.”

None of the employees or diners were injured during the robbery. The two men have remained in custody and will appear before a judge on charges of armed robbery and violence, reports the Telegraph.