On the 25th anniversary of ‘Independence Day,’ how would the military really fare against aliens?

'It would be like the Roman Empire fighting the US military today.' 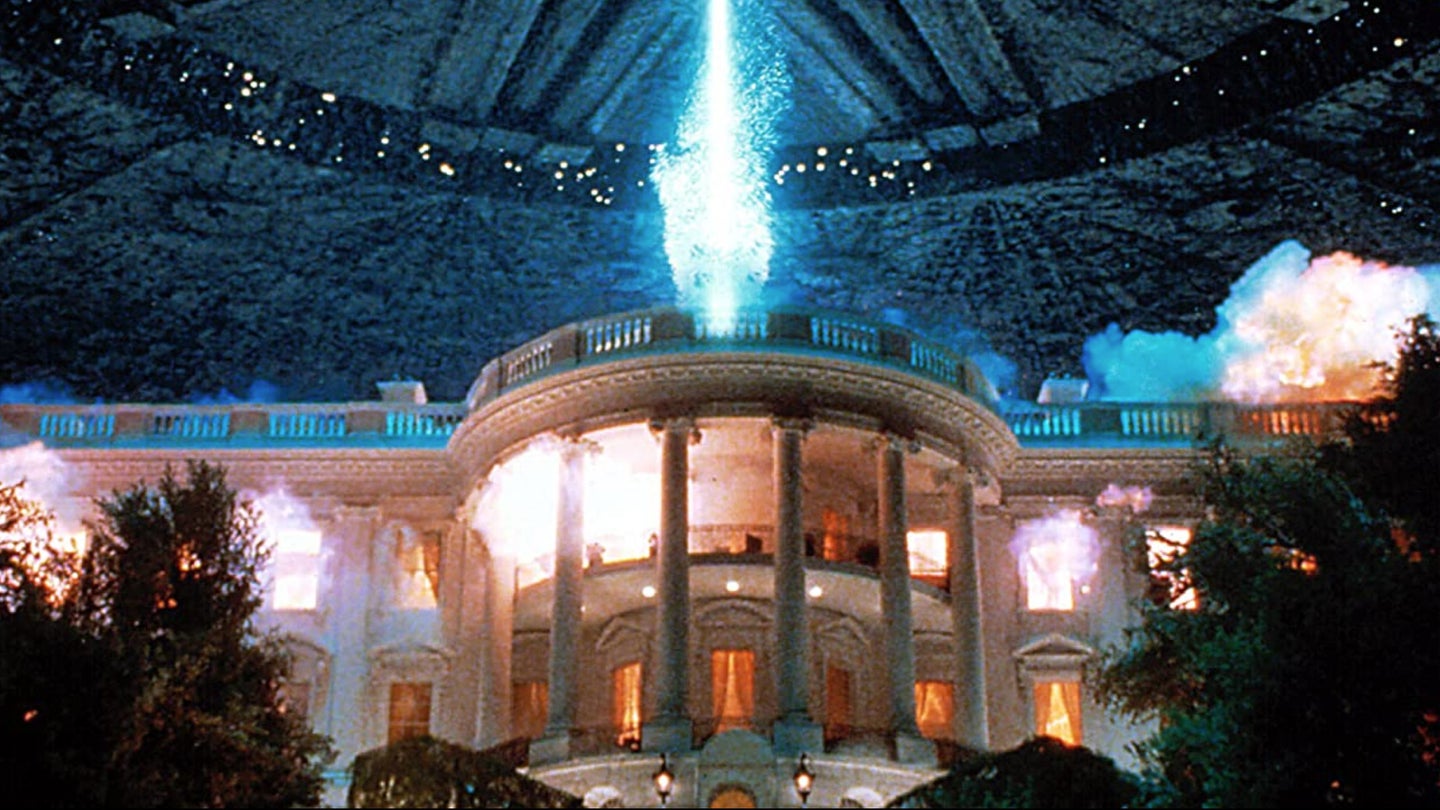 As you fulfil the great American tradition of getting resoundingly inebriated while grilling meat slabs this July 4th weekend, I hope you will take a moment to remember courageous patriots like Will Smith, Bill Pullman, and Cousin Eddie (Randy Quaid), who bravely told alien invaders a quarter century ago: “Up yours!”

That’s right: This month marks the 25th anniversary of Independence Day a movie about how a Marine F/A-18 Hornet pilot brought down interstellar aircraft through good Ol’ fashion American bravado – and a little help from Jeff Goldblum, who cleverly used a dialup AOL connection to pull off the greatest spam attack of all time!

(Author’s note: When the movie came out, I had just spent a year in Germany, where the concept of war is synonymous with murder, ruin, and fiery destruction. But even I swelled with pride when Pullman, as a fighter-ace turned president, proclaimed: “Today, we celebrate our Independence Day!” Cue salute.)

Of course, it was an entirely different world in 1996: Cell phones were used for talking; Hong Kong was still British; Saddam Hussein had been defeated and would never threaten the world again; and a company called Starbucks had just introduced the Mocha Frappuccino to promote diabetes.

Given the amazing advances in technology since Independence Day was first released, I wondered how the U.S. military would fare today against an actual alien invasion. Would brave pilots, Space Force Guardians, and cyber nerds be able to defeat an alien species hell-bent on destroying all human life?

Any alien species that could cross the gulf of space to reach Earth likely has technology that is hundreds – if not thousands – of years ahead of humanity, said Anne Simon, a biology professor at the University of Maryland and former scientific adviser to The X-Files.

“It would be like the Roman Empire fighting the US military today,” Simon said. (Interesting side note: In 2011 someone actually speculated what that would look like.)

“Swords and horses would be pretty useless against smart bombs and automatic weapons,” Simon continued.

Indeed, two Navy F/A-18F Super Hornets from the aircraft carrier USS Nimitz observed a strange Tic-Tac-shaped object in 2004 that appeared on radar to descend 80,000 feet in less than a second, which far exceeds the maneuverability of any U.S. military aircraft today.

It would be hard for a real-life Will Smith to get into a dogfight with an alien spaceship that can actually hit warp speed. But just to be sure I asked retired Navy Lt. Cmdr. Alex Dietrich, who was one of the Super Hornet pilots who observed the strange craft in 2004, if the aerial combat scenes in Independence Day provide an accurate representation of how military aviation could counter the UFO threat.

“I think we’re in good shape with the pew-pew missiles and should have no problem countering the mothership with the bang-bang,” Dietrich said. “I’m confident we’re prepared for an Independence Day scenario and the American people should rest well knowing our Tic Tac tactics are tip-top to give them tit for tat.”

Dietrich also suggested that perhaps it’s time for a remake of Independence Day using the latest technology in CGI special effects  — not to be confused with the 2016 sequel. Perhaps Lin-Manuel Miranda could direct it and write the soundtrack, she said.

While the concept of a musical version of Independence Day is intriguing, my original question continued to bite at me like Polish strippers: How would the military repel extraterrestrial invaders? Perhaps not surprisingly, none of the government officials I reached out to wanted to discuss this subject.

“We can’t discuss details on hypothetical questions like this,” said Pentagon spokeswoman Sue Gough, who handles questions regarding UFOs. “The Department of Defense would respond as needed as we would to any threat to the nation.”

Without more specific information to go on, here is my WAG – wild-ass guess – about how a real alien invasion would go down.

THE PENTAGON: A lieutenant colonel bursts into a Joint Chiefs of Staff meeting in “The Tank” to inform the nation’s top military leaders that alien spaceships have emerged from dark clouds. “We must respond!” one general yells. The military leaders immediately begin planning a multi-year effort to update the National Defense Strategy to incorporate the concept of Intergalactic Power Competition with Ceti Alpha V replacing China as the “pacing challenge.”

CAPITOL HILL: Lawmakers see the approaching alien invasion fleet and run toward television cameras to do standups for cable news. “I hope the military isn’t too woke to take on the manly aliens,” tweets Sen. Ted Cruz (R-Cancún). Separately, Sen. Tom Cotton (R-Ranger School) announces that he will oppose any defense appropriations to fight aliens if it involves indoctrinating U.S. troops with critical race theory.  “This is what happens when we perpetuate violence in military video games; aliens see it and think we want a war,” says Democratic Rep. Alexandria Ocasio-Cortez during an emergency recruitment session for the Army via a Twitch livestream of Call of Duty.

THE SKIES ABOVE WASHINGTON, D.C.: Both of the nation’s mission capable F-35s have been scrambled to intercept the alien invaders. Unfortunately, the cameras on the pilots’ futuristic helmets aren’t working, so they can’t actually “see” the bandits. They also realize that the software they need to penetrate the alien shields is not due to be installed until 2045. Not knowing what to do, they are assigned to bomb a cave in Iraq.

SITE X: As the alien spacecraft descend on cities all across the globe, first sergeants and sergeants major are in front of the most sophisticated sensors humankind has ever developed to make sure that no enlisted troops are wearing flip flops or have their hands in their damn pockets.

THE ATLANTIC OCEAN: A spaceship fires some type of beam at the aircraft carrier USS Gerald R. Ford, rendering the ship completely useless. No one notices any difference.

THE IBUPROFEN FACTORY: Workers watch in awe as the machine that makes 800 mg tablets is pushed to 110% of its capacity.

BARRACKS EVERYWHERE: Service members are ordered to change their socks as quickly as possible.

TWENTYNINE PALMS, CALIFORNIA: The aliens conspicuously avoid coming anywhere near the Marine Air Ground Combat Center as it is not suitable for intelligent life.

FORT POLK, LOUISIANA: Alien commander Zaphod Beeblebrox proclaims that his species have arrived at Fort Polk and will stay for the next ten thousand millennia. Army Spc. Schmuckatelli promptly asks his new alien overlord, “Who’d you piss off?”

But, here’s to hoping that none of that happens this Fourth of July weekend, and Happy Independence Day!