Navy pilot remembers the ‘absurdity’ of her famous UFO sighting

'I could see this turning into an SNL skit.' 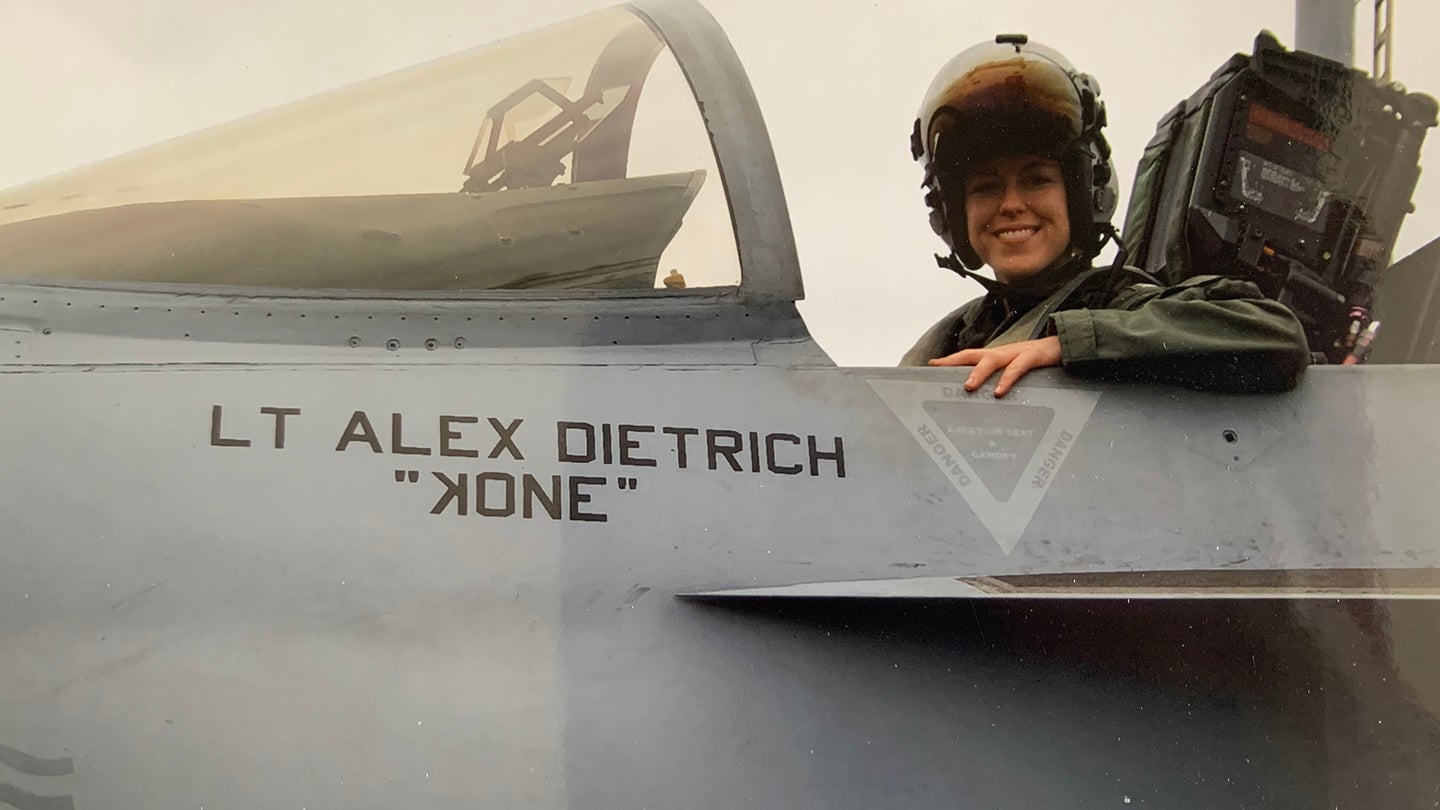 In 2004, retired Navy Lt. Cmdr. Alex Dietrich was one of two F/A-18F Super Hornet pilots who encountered a strange aircraft in the shape of a gigantic Tic Tac that disappeared in front of their eyes.

Dietrich, who reported what she saw that day, has since become famous within the community of self-proclaimed UFO experts and she was recently featured in an episode of 60 Minutes about a report expected to be presented to Congress next month about unexplained aerial phenomena.

When Task & Purpose asked her on Tuesday who she would like to play her on the big screen if her experience is ever turned into a movie, she said unhesitatingly: Tina Fey, the famous Saturday Night Live alumna.

Dietrich was an aviator from 2003 through 2007 and she went on to teach at the United States Naval Academy for seven years. Speaking with her, it quickly becomes apparent that Dietrich believes in facts, not baseless speculation.

That’s why she pursued civil engineering for her undergraduate degree, she said.

With her strong grounding in science, Dietrich has been unable to come up with a theory about what exactly she saw 17 years ago.

At the time, she was serving aboard the aircraft carrier USS Nimitz, which was about 100 miles southwest of San Diego, according to 60 Minutes. The cruiser USS Princeton, which was part of the carrier’s strike group, had detected on its radar several anomalous aircraft that could descend 80,000 feet in less than a second.

On Nov. 14, 2004, Dietrich and Cmdr. Dave Fravor, her squadron commander, were both dispatched to check out one of the strange aircraft. What happened next became known in UFO folklore as the USS Nimitz UFO Incident.

Fravor told 60 Minutes how the Navy aviators saw the Tic-Tac-shaped object that had no wings, markings, or exhaust plumes, so he flew closer to it. The unidentified aircraft responded by mimicking the movements of Fravor’s Super Hornet, he said.

“It was aware we were there,” Fravor said when he and Dietrich were interviewed by 60 Minutes on May 16. “And when it gets right in front of me, it just disappears.”

Within seconds, the aircraft reappeared on the Princeton’s radar. It had traveled 60 miles in that short period of time.

Dietrich told Task & Purpose that it would be “arrogant” and “reckless” and “foolish” for her to draw any conclusions about what that aircraft might have been, especially since her memories of that event are 17 years old.

“Part of me is bombarded with all these theories and questions from every angle,” Dietrich said. “I think: Oh, maybe I’ll read up on these different theories. But then, it’s just not scratching that part of my brain.”

Dietrich said her Navy career did not suffer after she and Fravor reported seeing the strange aircraft, but the two agree that they would have kept quiet if they had been flying alone that day.

That’s because there would have been no one to corroborate the sighting and they might have doubted what they thought they had witnessed, Dietrich said.

But given how many people in the air and on ships were tracking the strange object, there was no denying what had happened, she said.

Dietrich stressed that it is important for others to officially report seeing unexplained aircraft to reduce the stigma associated with such sightings, but at the same time people should not “rush to any sensational conclusions” before all the facts have been examined.

She also cautioned that the report due to be presented to Congress next month about what the military and intelligence community know about unexplained aerial phenomena is probably going to be a “huge letdown” for UFO enthusiasts.

“I feel like they are enjoying the anticipation and buildup more than the actual release,” Dietrich said. “Because when it comes out, I don’t think it’s going to give them what they want to hear.”