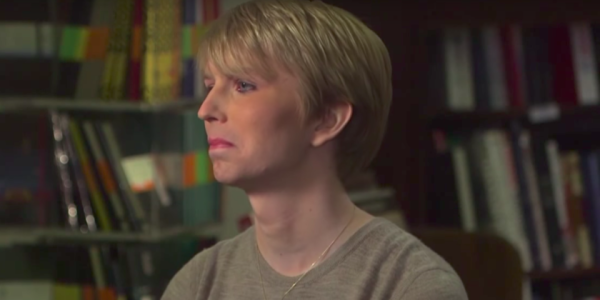 Chelsea Manning, the former Army intelligence soldier jailed for leaking hundreds of thousands of classified U.S. reports and diplomatic cables to Wikileaks in 2010, was recently denied entry into Canada, The Intercept reports.

Here’s the reason our friendly neighbor to the north cited: If Manning had leaked the documents in Canada, she’d have been charged with treason.

so, i guess canada has permanently banned me ? ✋???? @CitImmCanada denied entry b/c of convictions similar to "treason" offense ??? pic.twitter.com/xp0JOEEOGd

A letter from Canadian authorities posted to Manning’s Twitter account on Sept. 25 cites “serious criminality for having been convicted of an offense outside Canada” as the primary reason her request for entry was denied. But the letter also spends some time blasting the nature of Manning’s crime: “[I]f committed in Canada this offense would equate to an indictable offense, namely Treason described under section 46(2)(B) of the Criminal Code of Canada, punishable under section 47(2)(C) of the Criminal Code of Canada.”

Canada’s Temporary Resident Permit policy is pretty clear on what kinds of crimes could bar a traveler from crossing the border for any longer than it takes to get some french fries and gravy: “If the equivalent offense in Canada is considered indictable, which is serious criminality similar to a felony in the US, the visitor may be found criminally inadmissible to the country and refused entrance.”

Related: Chelsea Manning: ‘Freedom Was Only A Dream, And Hard To Imagine. Now It’s Here!’ »

Manning was sentenced to a 35-year prison term by a U.S. court-martial for espionage and theft in 2013, before having her sentence commuted by outgoing President Barack Obama last January. Even so, the news of Canada’s decision appeared to catch Manning off guard. “So, i guess canada has permanently banned me?” Manning wrote in the tweet. “@CitImmCanada denied entry b/c of convictions similar to “treason” offense.”

Lest you think the maple-leaf nation’s message to Manning was not in keeping with Canadians’ reputations for warm welcomes and easy feelings, it’s worth noting that the authorities also informed Manning of Canada’s maximum penalty for treason against the country: “14 years imprisonment.” God, they really are a forgiving people.