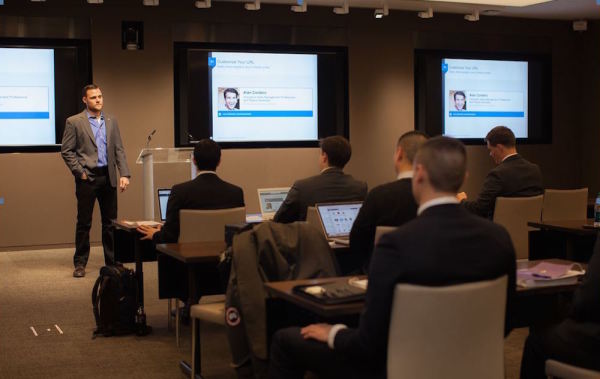 After separating from the Marine Corps in 2008, Paul Darnell, 28, knew only that he wanted to one day run his own business. Now he supports other businesses that use LinkedIn to become more dynamic and successful. As a member of LinkedIn’s sales solutions team, Darnell helps companies connect through individuals, allowing them to benefit from the same one-on-one connections that have made LinkedIn so popular with job seekers.

Darnell spoke with Task & Purpose about how his military experience led him to his career with LinkedIn.

Darnell enlisted in the Marine Corps in 2004, when he was only 17 years old, in part because he wanted to learn to be a good leader, and to do that, he knew he had to first learn how to follow. After boot camp and basic combat training, Darnell went to radio school at Twentynine Palms, where he was trained as a multi-channel radio operator before receiving orders to Okinawa, Japan. After two years in Okinawa, where he was able to experience the wealth of culture in the Asian Pacific, Darnell returned stateside and was based at Camp Lejeune, North Carolina, serving as a color sergeant with 2nd Marine Expeditionary Force until his separation.

“Joining the military was the best decision of my life. I can attribute the majority of my success to the time I spent in the Marine Corps,” Darnell says. The qualities of a good businessman are also those of a good Marine, he explains, and his four years of service prepared him well for corporate work.

“Discipline is important in all facets of life,” he says. “In the Marines, we learn a break in discipline could cost lives; while the stakes are not as high in the business world, the mentality still exists — if you falter, the mission will fail.”

Darnell (front, right) says his time in the Marine Corps was the best decision of his life.

After separating from the Marine Corps, Darnell wasn’t sure exactly what he wanted to do, but he knew he needed to go to college to do it. After twice being rejected from Michigan State University, Darnell started at the University of Michigan – Dearborn, but knowing he wanted more, applied to Columbia University in New York.

“In my capacity as MEF Color Guard, I was assigned to New York during Fleet Week, as I had to lead all the ceremonies during the celebration. It was during that Fleet Week that I met a fellow Marine who encouraged me to apply to Columbia University,” he explains. “I distinctly remember laughing, thinking to myself that there was no way Columbia would accept me, especially after having earlier been rejected by Michigan State. Thankfully, I was wrong.”

As a Marine who’d been trained to always be the best, Columbia’s prestige appealed to Darnell, who felt a special sense of accomplishment after having earlier been rejected from Michigan State.

Darnell, whose ultimate goal is to one day run his own business, studied economics, which he believes helped him acquire the skills he needs to achieve that goal. But more than that, Columbia opened up a whole new network of people who could help him.

“Columbia had a strong veteran and military presence, so I was able to stay connected there, but it also allowed me to expand from that community as well,” he says. “I joined several clubs and participated in different things, and I was no longer fully identified by being in the military.”

By branching out, Darnell says, he was able to form the connections that would later help him achieve success in the business world. “Every job I have been offered or opportunity I have had can be attributed to the network I have cultivated in the military, at Columbia, and here in New York,” he says. “I cannot stress enough the importance of meeting like-minded individuals and creating a strong and wide-reaching network.”

Finding a career with LinkedIn

Following graduation, Darnell spent a couple years working in finance, but it wasn’t the right fit, so a friend suggested he apply at LinkedIn. “A good friend of mine from college was working at LinkedIn, and she encouraged me to apply and helped me with the process,” he says. “To prepare for my interview, I researched the company and studied its business as much as I could; I knew that even as a veteran and an Ivy League grad, I still had to distinguish myself from the many other very qualified individuals.”

Now, as a member of the sales solutions team, Darnell’s ability to adapt and react quickly, especially in his fast-paced job, is key. But he also relies on his military training to get the job done. “Attention to detail is drilled into our psyche from the first day of boot camp,” he explains, “and this is a skill that’s invaluable in the corporate world.”

His advice for transitioning vets

For a successful transition, Darnell says you need to get out of your comfort zone. “You spend your enlistment constantly being challenged and overcoming those challenges. Don’t take that away from yourself when you get out,” he says. “Don’t just go to a school close to home because it feels safe, for example. Go to a school where you can get the best education possible to help you achieve your goals.”

Darnell also advises veterans to make good use of their networks, especially the network they developed in the military. But don’t just ask for a job — ask for advice. The people in your network are more than willing to share the knowledge they’ve gained if you ask. “There are great men and women who have gone before us and helped us out,” he explains. “We are part of the world’s biggest family, and for the most part, we do everything we can to support our military family.”

“Do not become complacent, and never be afraid to ask for help,” Darnell says. “No one ever got anywhere without guidance and help, not even Marines.”