It’s funny how much another person can change your life. Especially when he’s wearing a vest full of explosives and... 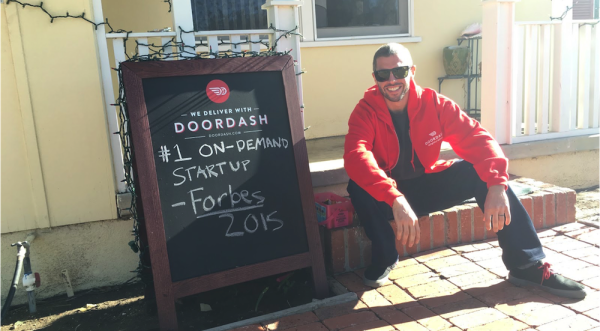 It’s funny how much another person can change your life. Especially when he’s wearing a vest full of explosives and wants to blow you up. For Chris Clark, an otherwise normal day with his Marine reconnaissance team in April 2006 became a turning point in his life after he narrowly survived a suicide bomber in al Anbar province, Iraq.

“This event was the catalyst that gave me the drive and ambition I have today,” Clark said in an interview via email. “I appreciated the imminence of death, and the need to live with gratitude for everything but satisfaction with nothing. I will never let myself settle with mediocrity. I will put passion, sweat, blood, and tears into everything I pursue.”

If that sounds intense, it’s because Clark is intense. And he walks the walk, applying this ethos in all aspects of his life since that day. Now, 29, Clark lives in Laguna Niguel, California, with his wife Danielle and works as a general manager for DoorDash, an on-demand food delivery startup.

Clark left active duty as a sergeant in 2008, and then got out of the reserves in 2014, leaving 4th Force Reconnaissance Battalion as a staff sergeant. Originally enrolled in a local community college, Clark earned a spot as a transfer student at Stanford University, where he graduated in 2012.

It was hard for Clark to shed his early troubles. “I went from a kid who barely graduated high school to an enlisted Marine,” he recalled, “but I still had a long way to go.” Transitioning out of the Marine Corps was his first real test as a civilian. He had to work incredibly hard: “I leveraged the discipline and work ethic from the military and applied them to academics. It’s like being in a recon team – you are only as good as your last mission, and every single day is a selection,” Clark said.

Making it to Stanford was a huge validation of his drive and effort. He studied under Dr. Condoleezza Rice, who served as secretary of State and national security advisor during George W. Bush’s presidency.

Discussing foreign policy and international economics with former cabinet members reminded Clark how far he had come, and how we was able to get there. “The stark differences in my day-to-day realities highlighted how hard work and a natural competitiveness allowed me to forge my own path,” explained Clark.

Education is critical for a successful transition, according to Clark. “I highly recommend taking advantage of . A college degree is a necessary commodity in the workplace. Without it, you are unlikely to compete for good jobs.” And brand matters, especially for enlisted veterans. “The better the school, the better you are set up for success.”

Transition is hard though. And Clark is frustrated by the lack of preparation on the part of many people leaving the military. “Most servicemembers are not ready to enter the school or the private sector. There is a sense of entitlement rather than asking ‘How can I be useful to my team or company today?’ Nobody at work cares that I was in a recon team a decade ago.”

Now as a general manager in the startup world, Clark has to adapt to an even higher level of performance. DoorDash was just ranked one of the top 10 fastest-growing startups by Forbes, and the company pushes its managers hard.

“Everyday is a challenge,” Clark said. “There are unlimited possibilities to fail or succeed. I need to apply all of my natural and learned abilities to crush it at work.”

Clark admits that working at a hot tech company isn’t for a lot of people. “I would only recommend the startup world to veterans who are hell-bent on success. You need to recognize that the world owes you nothing. And you need to be even more committed to achievement now than when you were in the military.

Clark closed our interview on a cautionary note. “Remember, in the private sector there is no promotion for time in grade.”