Reflecting On 20 Years Of Service In The Military

In August 1992, I donned an Air Force uniform for the first time in the Reserve Officers Training Corps at... 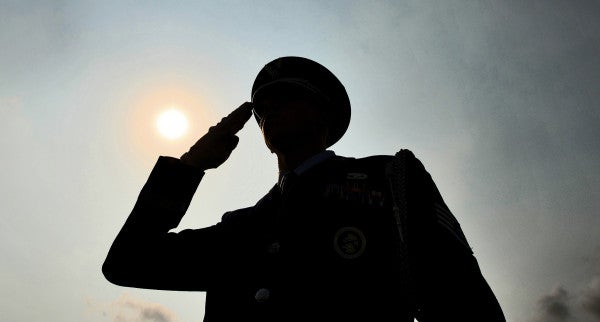 In August 1992, I donned an Air Force uniform for the first time in the Reserve Officers Training Corps at West Virginia University. I remember standing at a chest-high locker getting dressed for morning drill, then positioning myself in front of a full-length mirror to make sure I had everything in the right place. I’ll never forget how I felt when I stared at myself that morning. It was something I’d never felt before and have experienced only a few times since. It wasn’t quite alarm, but not satisfaction either. It wasn’t pride, or fear or cockiness. It was more a feeling of profound reflection. Was I really joining the military?

It was an odd moment for a kid like me who spent the latter half of his childhood in a lower high school social caste. I had a killer mullet and didn’t run with the jocks. Comic books and camo stuff was cool, and so were the G.I. Joes I played with into eighth grade. Even though I was well-accepted among my friends, I hated high school, and couldn’t wait to leave.

I was a senior when the Desert Shield build up started in August 1990 and would turn 18 the following March. I remember being intensely aware of my coming draft registration when Desert Storm exploded across Kuwait that January — less than three months until my birthday. The stark reality of it almost made me feel queasy; after all, this was real, unfolding right there in front of me on CNN. Despite my interest in military things when I was younger, I couldn’t fathom going off to war. Leaving my family, and potentially never coming back? A few days into the conflict, one of our neighbor’s sons, who was an Air Force C-130 crewman, died when his plane was shot down on a mission over southern Iraq, crashing into the desert killing everyone on board. If that was what going to war was, I wanted no part of it.

This was my attitude when I started my freshman year at West Virginia University, and it lasted until I was assigned a roommate in 1992 who was part of Air Force ROTC. I slowly ended up falling in with his crowd, making friends, and remembering what it was about the military that I liked so much in my formative years. Then I got a haircut. When I decided to join, I remember my younger sister saying to someone, “I think joining the military was always in the back of Jason’s head.” Maybe she knew me better than I knew myself — it was a perfect fit, and I ended up with a scholarship that paid for my last two years in college (plus, I was a college kid and chicks dig uniforms). I was shaking off my high school geekiness, finding my niche, and I began to get excited for my future. Things were going to work out.

May 14, 1995, was a big day for me, probably the biggest in my life up to that point. I was 22 years old and my ROTC gamble was culminating into a big moment: commissioning into the military officer corps. With my stunning future bride by my side, my parents, sisters, and grandparents reported promptly to the theater in our student union first thing in the morning. We found the room brimming with the families of other cadets from my graduating class, eagerly waiting for us to take our oaths. The moment was extra special for me because my two sisters would be “pinning” me with the shiny gold second lieutenant bars that my grandfather — sick and dying, but still there to share the moment — wore when he was a bombardier on a B-24 Liberator during World War II.

I was an officer now, grown up and going into the workforce. For the first time in my life, everything was on me alone, and I would have to sink or swim. Within a month I’d be reporting to my new commander at my first duty station: McChord Air Force Base, just outside Tacoma, Washington.

I spent the next ten years chasing the Air Force across the globe. It turned out I was pretty good at it and my wife and I were having a blast doing it. We never gave a thought to staying for 20 years at the outset, but before long, we found ourselves at the ten-year point and were faced with the question whether to get out or not. We were living overseas at the time and I’d just been selected for major. Because of personnel cuts, there were many people being offered severance pay to get out early. Staying in uniform could mean more time away from home — 365-day deployments were multiplying exponentially, and we had a brand new kid at home. There was a lot to think about and for the first time ever, I felt stress and uncertainty, sprinkled with a dash of cynicism.

Whether against our better judgment or not, we decided to stick with the uniform, hoping the latter decade would be as gratifying as the former. While it ended up being good, the second ten years were significantly more difficult than the first for a variety of reasons. Dramatically increased wartime demands took their toll, and so did greater obligations to kids and family. In addition, four straight years of commanding squadrons produced a fair amount of gray hairs. Toward the end, we were worse for wear, but still had some great times, especially while stationed in Europe.

Aside from incredible travel opportunities, as I climbed the ladder I was able to positively affect troops in bigger ways, whether through simple mentoring, helping them take care of their families, or creating opportunities for them to grow and succeed. I also learned incredible things from them; not just about life in a uniform, but about life in general, and it humbled me. I know I'll keep in touch with more than a few of them for the rest of my life.

Now I’m standing at the end of 20 years, and people ask me, “Will you miss it?” and, “Would you do it again?” The answers are complicated. I’ve officiated several retirements myself and I've always reminded audiences that it’s events like these that make you look back in reflection. I find I’m doing that a lot lately. I’m also finding that cynicism I first felt ten years ago is still there (often more obvious than before), but I try to keep things in perspective.

Could I have had continued successes if I stayed on active duty? Maybe. Will I miss it? Yes. Would I do it again? Absolutely. Is it hard to believe I may never wear a uniform again? With a very heavy heart, yes. After all, I’ve had it on for more than half my life.

The big question though: In today’s society, is military service worth it? No question. Over two decades, I’ve learned and relearned that the benefits far outweigh the costs, not just for the individual, but also for our free society, and it doesn’t matter if you serve for two years or thirty. Before Revolutionary War hero Nathan Hale was executed by the British, he said, “I only regret that I have but one life to give for my country.” How much better would our society be if every 20-year-old kid could truly identify with and understand this sentiment? Few things outside military service can do that.

Despite some nagging frustrations with things beyond my control, I can’t think of any real regrets that overshadow all the fantastic experiences I’ve had. I have seen all 50 states, made numerous cross-country road trips, set foot in more than 35 countries on four continents, made the best friends of my life, and changed people who have changed me in return. I never had a bad job, a bad temporary duty assignment, or a bad deployment. Never. Not even the ones to the Persian Gulf, Africa, and Afghanistan. My family has been enriched by military life. Meeting and becoming friends with people of other places, cultures, beliefs, and value systems has taught us all tolerance and respect, but also appreciation for what friendship and family really means. Enduring sacrifice and long absences has taught us the costs and the value of true human freedom. Few Americans are lucky enough to learn these kinds of lessons. It has made us incredibly strong people, and we are grateful.

The Air Force took me, a dorky mullet-headed kid with cuffed acid-washed jeans and mediocre confidence, and gave me self-reliance, instructed me on leadership and humility, and made me appreciate that there are bigger and more important things in life than self. The Air Force’s three core values — service, excellence, integrity — are really life’s core values. I internalized them and will take them to my grave. Military service made me who I am like nothing else could. I am a better person, better husband, and better father because of it.