Why Influential Junior Service Members Must Know Their Limits

I’ve said it myself, the military is an institution for and by conformists. As the cliché goes, “The military exists... 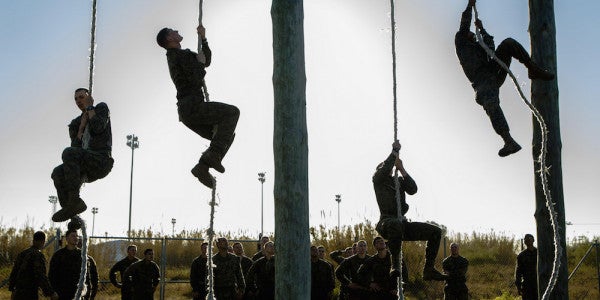 I’ve said it myself, the military is an institution for and by conformists. As the cliché goes, “The military exists to protect democracy, not to practice it.” Even though we sometimes talk about flattening organizational charts and incorporating the management fad of the week, in the end, the military has to be a dictatorship. The battlefield requires it. When cannons are firing, there’s no place for second guessing and no time for open-ended discussions.

Where does that leave our young military innovators, brimming with new ideas? Often, senior leaders have been smelling the same decomposing B.S. so long, their noses are immune to it. Young military professionals see, or smell, this. They push new ideas, but often find themselves stymied by the military's bias toward conformity and the status quo. They may be crushed by the system, get burned out and leave, or just abandon hope, and become faceless cogs in the machine. But it doesn’t have to be that way.

Senior leaders have a responsibility to foster an environment that encourages innovation and rational risk-taking. At the same time, junior leaders have to understand that the structure of a military organization means that there's a framework within which one has to work if they want their ideas accepted.The military is never going to have ball pits, slides, or let you call your boss by his first name like some tech startup, but it does have room in the system for fresh ideas.

Sometimes you just have to know how to work within the system to effect change, and yes, know the limitations of the change you can effect. If you know how to do that, you can make real change, albeit incrementally, and not just be a Don Quixote, jousting at windmills. If you can accept just a few concessions to the system, your ideas have a greater chance of being tested in the real world and not just the world of “woulda, coulda, shoulda.”

Don’t complain about a problem unless you have a solution to it.

Just telling the world that something’s screwed up doesn’t make you an agent of change. It just makes you a tiresome whiner. Sometimes the best solution to a problem is still a frustrating one. Before you open your mouth about a problem, make sure you have some idea for a better alternative.

If you feel the need to open a sentence, “With all due respect, sir…,” just stop right there. Either something is respectful or it’s not, and the second option isn’t really an option in the military. Check yourself before you wreck yourself. Have a plan to communicate your idea as a reasoned, viable option, not just going down in a blaze of glory over some trivial issue.

There are actually venues in the military where relatively junior personnel can make a big impact, but they are often blown off because people would rather just complain than actually do something. Those conferences that people often have to be “volun-told” to attend? Many of them are where the grunt work of setting priorities for higher commands actually happens. You don’t think the generals do all that themselves, do you?

That mission planning software you say sucks? There was probably a message requesting user input for the contractors fixing it. That tactics manual? Your unit was likely tasked with sending someone to the conference that revises it, but you didn’t volunteer. There was the after-action review that your executive officer requested inputs for and you said you had no items needing improvement. The list goes on. You can’t blame the institution for not appreciating your genius if you don’t even take advantage of the chances given to display it.

Every service has at least one professional journal, and usually several more for various specialties, where new ideas can be aired. Often the space in them is filled by sycophantic drivel from that service’s headquarters. They don’t get page views like TMZ or Gawker, but senior leaders, or at least their staff, read them. If you’re willing to put some analytical rigor into your personal pet rock, your ideas can gain traction in some high places. If the official publications aren’t in your wheelhouse, there are now myriad other print and online media you can use as your bullhorn. Again, just be sure to “check yourself.” Be the professional you profess to be and don’t just use them to air dirty laundry.

Stay in your lane.

As a service member, you are, or should be, the expert in your particular field. First, be that expert. You should know it better than your superiors do, because you’re working in the trenches everyday. No one will, or should, listen to your opinion on the big things unless you’ve mastered the small. No colonel is going to listen to a captain’s musings on how his unit should fit into CENTCOM’s operational strategy. However, that colonel will probably listen to that captain when he talks about his own unit or weapons system, if he’s proven himself an expert in his field. That’s where you can make a difference.

Know your place and either make peace with it or find a new one.

As a pilot, I’m a line dog. I’m a professional at that, and I’m pretty good at it. Over my time in the military, I tried to make my individual unit and aviation community better by concentrating on the things I could change within the scope of my influence. No one in authority was going to listen to my opinions on geopolitical strategy, because I didn’t put myself in a position to be an influencer in that arena. If I’d wanted to do that, then I should have either asked for assignments that did or gotten out and joined some think tank.

As the prayer goes, “Grant me the serenity to accept the things I cannot change, the courage to change the things I can, and the wisdom to know the difference.” Junior personnel can indeed make real differences at higher levels than they appreciate. The military has 20-somethings making a difference at the strategic level everyday; they just don't always realize it.

That good idea during mission planning on how to sequence your assets into the objective, where to put security, or any of a hundred other things? That could be the difference between mission success or failure, life or death, or whether your unit ends up on the cover of Time magazine as the debacle of the month. That is making a difference. Shepherd your influence, use it wisely, and you can often make a real difference, whether you feel appreciated for it or not.