On May 22, the U.S. Air Force’s largest A-10C Warthog fighter group went out for a stroll. Military personnel from... 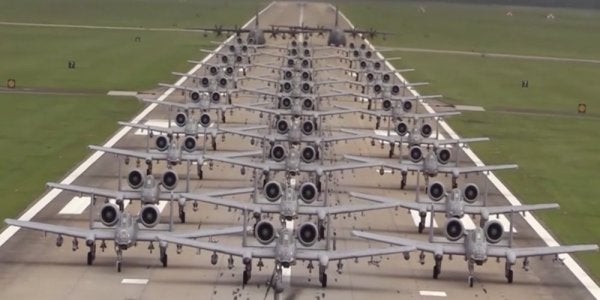 On May 22, the U.S. Air Force’s largest A-10C Warthog fighter group went out for a stroll.

Military personnel from the “Flying Tigers” 23rd Fighter Group, stationed at Moody Air Force Base in Georgia, conducted a surge exercise to show off the Warthog’s capacity to rapidly deploy combat aircraft anywhere on the planet.

While the unit’s parent, the 23rd Wing, boasts an impressive array of aircraft — including the HH-60G Pave Hawks and HC-130J Combat King II aircraft who participated in the exercise — it also possesses more A-10s than any other U.S. air wing. And there’s nothing more beautiful than seeing 30 combat-ready Warthog attack aircraft laid out in an “elephant walk” on a runway, ready to bring the pain:

The elephant walk came just a day before the Pentagon reaffirmed its commitment to keeping the beloved A-10 and its fearsome 30mm cannon flying indefinitely. On May 23, DOD asked Congress to fully fund the 283-Warthog fleet and guarantee the attack craft’s long-term viability.

“The world has changed, so we're trying to maintain capacity and capability,” Maj. Gen. James Martin, the Air Force’s deputy assistant secretary for budget, told reporters during a briefing, after which a spokeswoman confirmed the A-10’s eventual retirement had been pushed off “indefinitely,” per Defense News.

While we have no plausible proof that 30 Warthogs rolling down a runway swayed the DoD’s mind regarding the future of the A-10, we’re sure it helped. Maybe not as much as ex-fighter jock and Republican Rep. Martha McSally’s notorious love affair with the Warthog cannon’s trademark BRRRT!, but still.

Here’s a timelapse of the Warthogs assembling on the Moody AFB runway, posted on Facebook by the 23rd Wing: