The pilot declared an in-flight emergency before bringing the plane down without landing gear, Moody Air Force Base officials said 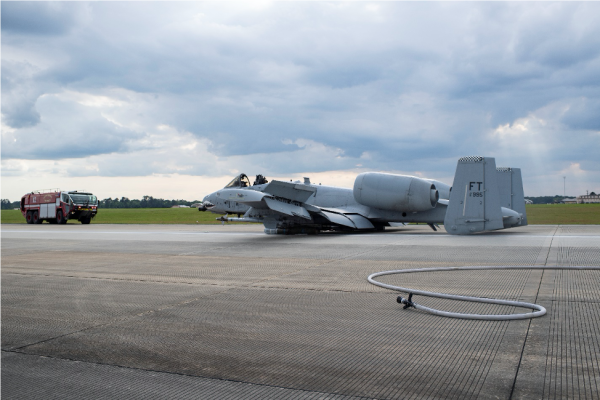 If you’ve seen photos circulating around the internet of an A-10 Thunderbolt II attack aircraft sitting on a runway without its landing gear extended, there’s a reason for that.

The aircraft was in the middle of a routine training mission over Moody Air Force Base in Georgia on Tuesday when the pilot declared an in-flight emergency, then had to bring the plane down without landing gear.

Though the details surrounding the emergency in a press release from the base’s press office were sparse, officials said that the pilot was not injured and was evaluated by flight surgeons before being released.

The aircraft was assigned to the 75h Fighter Squadron, officials said. An Interim Safety Board will investigate the incident.

Photos of the A-10 were posted on the popular Facebook group Air Force amn/nco/snco, where commenters were grateful for the pilot’s safety and impressed by his or her skill.

“So long as the pilot is ok, that’s a great landing given the circumstances,” wrote one commenter.

“Great piloting though,” said another.

“And she is loaded,” wrote a third, pointing out the ordnance on the plane’s wings. “Scary tummy slide!!!!”

This isn’t the first time an A-10 has been forced to making a emergency belly landing. In July 2017, a pilot assigned to the Michigan Air National Guard’s 107th Fighter Squadron was forced to land without both his landing gear and his canopy after his aircraft’s 30mm GAU-8/A Avenger cannon malfunctioned.