The crash occurred on Jan. 27, 2020, in Afghanistan's Ghazni Province. 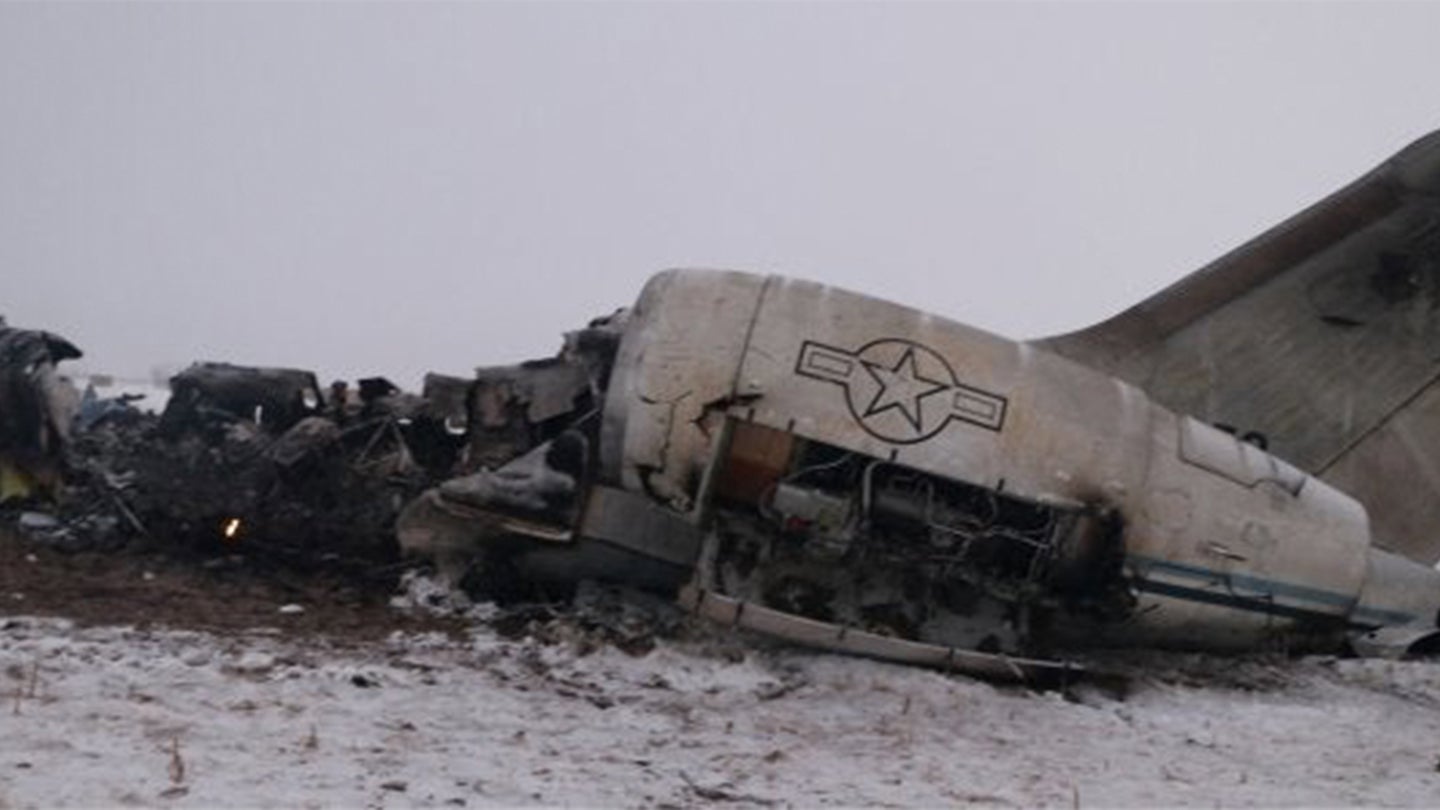 An Air Force plane crash in Afghanistan last year that cost the lives of its two pilots was caused by an engine failure and a series of pilot errors, Air Combat Command’s accident investigation board found in a report published on Thursday.

The crash occurred on Jan. 27, 2020, in Ghazni Province. Lt. Col. Paul K. Voss, 46, and Capt. Ryan S. Phaneuf, 30, of the 430th Expeditionary Electronic Combat Squadron, were flying an E-11A communications aircraft on a combat sortie when a fan blade broke free from the left engine, causing it to shut down.

Then the pilots proceeded to shut down the right engine as well, despite it being operational, investigators noted. The two-engine shutdown meant that the crew had to glide to an airfield for a landing.

But instead of selecting any of the nearby runways at Bagram Airfield, Kabul International Airport, or Forward Operating Base Shank, the crew instead decided to head towards their home base of Kandahar Airfield, approximately 230 nautical miles away.

By the time the pilots realized their mistake, it was already too late, and their attempt to land in a field about 21 nautical miles south of FOB Sharana was fatally unsuccessful.

The plane went down in an area partially-controlled by the Taliban. Immediately after the crash, the Taliban ambushed Afghan security forces attempting to reach the plane. Later, the U.S. Navy’s SEAL Team 6 recovered two bodies and a flight recorder from the site and destroyed sensitive military equipment there, according to reports at the time from Connecting Vets and Newsweek.

“This tragic accident and the loss of these two Airmen will not be forgotten,” said Gen. Mark Kelly, commander of Air Combat Command, in a press release on Thursday. “These Airmen gave the ultimate sacrifice in service to the nation while deployed supporting an overseas combat mission. They should be recognized and remembered for their dedication and bravery.”

The 42-page report released by the investigation board details how blindspots in pilot training could have influenced the tragic pilot errors.

When the fan blade broke free, it made a loud bang and caused potentially violent aircraft vibrations, investigators said. This could have triggered a “startle reflex” in the pilots which “violated a pilot’s expectations and can affect the mental processes used to respond to the event,” they wrote.

The startled pilots may have hard a hard time analyzing the situation properly, the board wrote. For example, the aircraft instruments would have taken about a minute to show that the left engine, not the right, had failed, but the pilots did not wait long enough to find out. During the 24 seconds immediately following the bang, the pilots tried adjusting the throttle settings to try to figure out which engine was out. However, 24 seconds was not nearly enough time to study the results of those changes effectively, investigators said. At the 24-second mark, the pilots made an arbitrary decision that the right engine was faulty and proceeded to shut it down, according to flight data. However, this led to an unnecessary dual-engine shutdown.

Blindspots in training may have had something to do with this, investigators wrote. The E-11A training program does not practice dual engine-out procedures, and such a scenario was considered unlikely, they said. When the pilot determined the right engine was malfunctioning, he also may not have thought to try airstarting it mid-flight.

Even so, what explains the crew’s decision to try to reach Kandahar and not closer airfields? Bagram, Kabul and Shank were all within 40 nautical miles of the aircraft’s position when they shut down the engines, and the weather was clear over all those locations, investigators noted. Unfortunately, due to their position, the pilots only had eight minutes to get set on a glide path towards any of the nearby fields, and by the time they committed to Kandahar it was too late to change course. Their flight pattern indicates that the pilots never considered the other options, investigators said.

Why didn’t they? Investigators said flying habits among E-11 crews may have had something to do with it: squadron pilots said crews preferred returning to Kandahar for most emergencies or other issues.

“Discussion of emergency airfields was rare,” investigators noted. “Of note, for several months prior to the mishap, an E-11A never diverted to another airfield.”

But even if the pilots had decided to land at a closer airfield, it may not have been a successful landing, investigators wrote.

“[T]he exact probability of a successful dual engine out landing, since it has never happened, cannot be determined,” they wrote. “During the mishap, the [crew] would need to alter the flight plan, accomplish checklists, initiate communications, and manage their descent and routing to arrive at the divert airfield in a position to land without the ability to correct any miscalculations.”

Unfortunately, some of the specifics for why the pilots chose to act the way they did will never be known, since the cockpit voice recorder and digital flight data recorder stopped recording after the engines cut out, investigators noted.

Besides the loss of the pilots, the plane crash cost the government $120 million, investigators said. The E-11A serves as a Battlefield Airborne Communications Node, which allows service members in the air and on the ground to share voice, video, imagery and data with each other. BACN is often referred to as “Wi-Fi in the sky,” investigators wrote, and connects multiple communication platforms on the battlefield.

Related: This everyday piece of hardware crashed an $11 million drone