One Veteran Is On A Mission To Replace Worn American Flags

When Stan Arachikavitz spots a worn, shredded or tattered U.S. flag flying from someone's house, he can't just drive on... 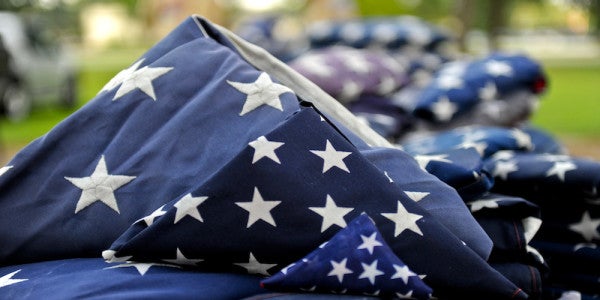 When Stan Arachikavitz spots a worn, shredded or tattered U.S. flag flying from someone's house, he can't just drive on by.

“It doesn't matter where, if I see a flag that needs to be replaced, I replace it,” said Arachikavitz, who lives on the west side of Owensboro near Carter Road. “I'll knock on the door and ask if I can replace it. I haven't had anybody say no. One day last week my wife and I were bicycling and we went by a house. The flag was literally demolished it was shredded so bad. The next day I took a new flag and knocked on the door as asked if I could replace it. The lady was so excited. She said 'Yes, please.' “

Patriotism and devotion to the American flag run deep with Arachikavetz, a veteran of both the U.S. Marine Corps and the U.S. Army.

“I know so many people in the military,” he said. “They represent the flag. My son was in Iraq. My dad was in Korea. My brother was in the Corps for 25 years. The flag means so much. It really excited me to see people take good care of it.”

Replacing worn flags began for Arachikavitz more than 30 years ago when he spotted a tattered flag flying over a hotel in Titusville, Florida, in full view of a busload of foreign tourists. The hotel has several flags flying, a U.S. flag and others from other countries. The U.S. flag was shredded. “That wasn't right,” Arachikavitz said. “I told the manager if I bought a new flag would he please put it up. … I did and he put it up.”

So, for three decades, Arachikavitz has made it his mission to replace worn U.S. flags. Some years he's replaced five or six. Other years he's replaced 15 or 20. “It's not like I've done a million, but when I see one I pull over. … Last year I did three. This year I've done five and I'm looking at three more right now. I always carry four flags with me. Everybody I've dealt with has been grateful.”

A few times Arachikavitz has knocked on people's doors wanting to replace their flag, only to have no one answer the door. When that happens he goes back a second or third time. If he still can't ask permission, he said he goes ahead and replaces the flag.

“It makes me feel great, it really does,” said Arachikavitz, who has posted his flag replacement efforts on Facebook. “A woman in Menominee, Michigan, sent me eight flags and said she will send more. Mike Murphy, who lives in Evansville, came over with 10 flags. Mike asked me if it would be alright if he stole my idea. I said 'Feel free.' My goal is to replace a lot of flags out there that need replacing.”

Some will remember Arachikavitz, an avid tobacco supporter, for his part in burning then-First Lady Hillary Clinton in effigy in 1994 at a pro-tobacco rally in Owensboro, which drew national attention. He still gets asked about that, Arachikavitz said, but not often. Now his passion is finding and replacing worn and tattered U.S. flags, he said. He thinks he's replaced about 200 since 1986 when he replaced the first one in Florida.