Slaps roof of helicopter: 'This bad boy can fit so much rescue in it.' 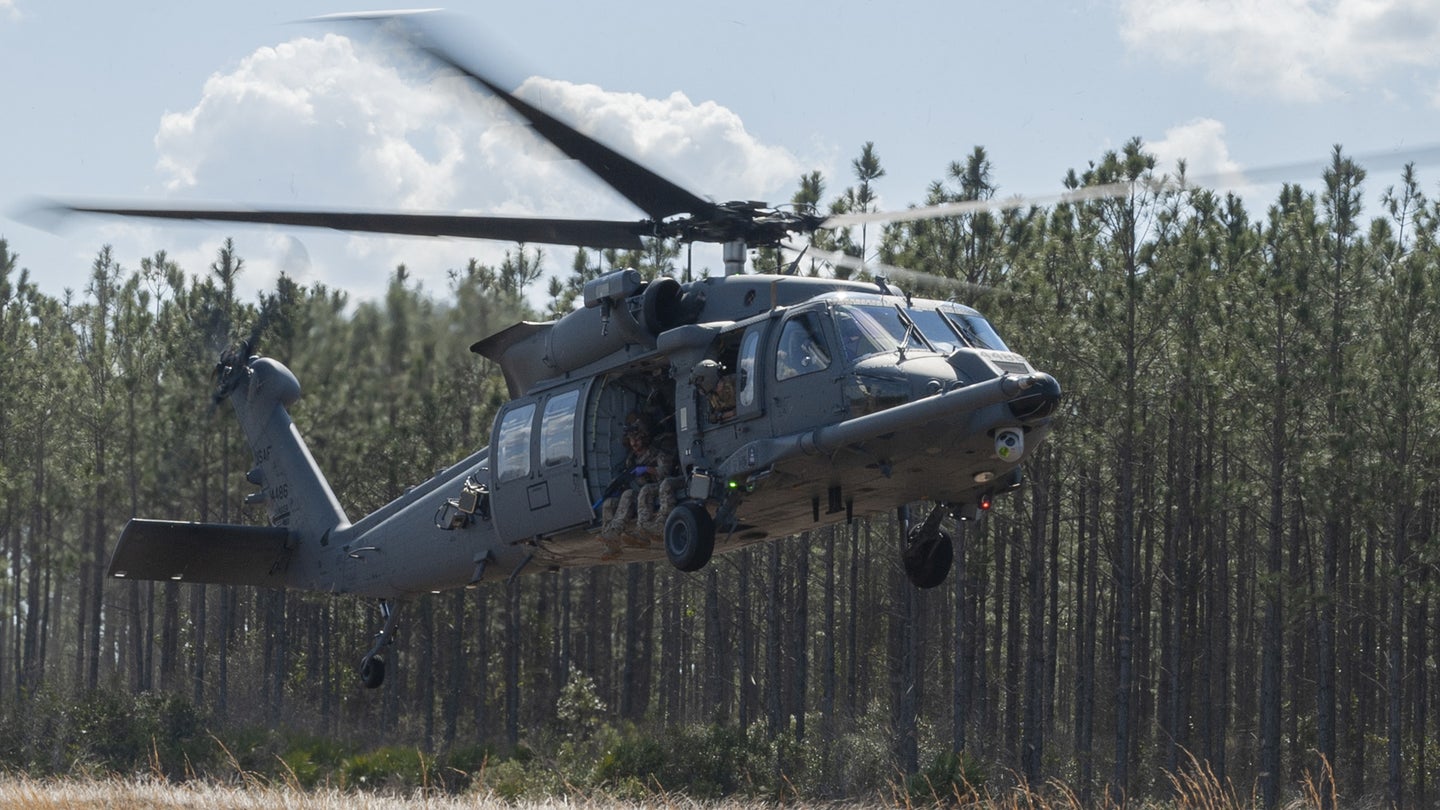 The Air Force search-and-rescue community marked the start of a new era last month when airmen with the 41st and 38th Rescue Squadrons based at Moody Air Force Base, Georgia carried out the branch’s first-ever rescue mission using an HH-60W Jolly Green II helicopter, the new aircraft that is meant to bring better range and 21st-century technology to the art of saving people in need.

“The Jolly Green II is ready to get to work, and stands ready for the next rescue,” Moody Air Force Base wrote on its Facebook page on Saturday.

The call of duty may have come as a bit of a surprise at 4:23 p.m. on Sept. 7, which was when the Air Force Rescue Coordination Center at Tyndall Air Force Base, Florida received a request to move a patient being treated at the South Georgia Medical Center, about 10 miles southwest of Moody, to the Moffitt Magnolia Center about 200 miles south in Tampa, Florida.

Lt. Col. Matthew ‘Muddy’ Mustain, commander of the Air Force Rescue Coordination Center and a former pilot at the 41st RQS himself, alerted Moody, which had two helicopters available. However, the aircraft had just returned from a four-hour training sortie and would need fuel and a maintenance look-over before the mission, according to a commentary written by Mark ‘Radio’ Godwin, the historian of the Moody-based 23rd Wing.

Still, the long flight earlier that day did not stop the rescue machine at Moody, which sprung into action when the call came that a patient needed their help. Godwin described in detail how a large team of airmen worked together to get a HH-60W with the tail number 19-14490 back in the air.

First, Master Sgt. Stephen Villanella, production superintendent for the 41st Rescue Generation Squadron, requested fuel for the helicopter from the Maintenance Operations Center. Next, Senior Airman Rachel Turner, a fuels controller with the 23rd Logistics Readiness Squadron, contacted the maintenance airman on the flight line, Airman 1st Class Javonta Smith, and sent him to refuel the helicopter, which he did in about four minutes and 525 gallons of gas.

Meanwhile, Staff Sgt. Nicholas Cellini and Airman 1st Class Chandler Long, both with the 41st RGS, did their maintenance checks on the aircraft. Once completed, Staff Sgt. Stephen East sent 19-14490 on its way. The aircraft took off at 5:10 p.m.: just 43 minutes after South Georgia Medical Center first called for help.

Flown by Capt. John “Jack Sparrow” O’Neill, 490 landed at a soccer field near the medical center. Capt. Cameron Elward, a flight doctor with the 38th RQS, Staff Sgt. Nathan Hughes, and Senior Airman Timothy Woods, both pararescuemen with that squadron, got out and rode in an ambulance to the center to pick up the patient, who was actually an airman with Moody’s 75th Fighter Generation Squadron, Godwin explained. With the patient on board, the three airmen turned back to Rescue 490, loaded the patient into it, and took off for the flight to Tampa.

O’Neill said they were dodging bad weather the entire way to Tampa, Godwin wrote, but the helicopter landed safety at a soccer field in Tampa at 7:14 p.m., where an ambulance from Moffitt Magnolia Center picked up the patient. At 9 p.m., Rescue 490 took off from Tampa and returned to Moody, ending a long but fulfilling day and tallying one save for both the 41st and 38th Rescue Squadrons.

The save was a team effort, Godwin said, including the folks at Moody and the South Georgia Medical Center simply working the phones to make the mission happen.

“The coordination between all agencies here at Moody Air Force Base, South Georgia Medical Center, and the Air Force Rescue Coordination Center not only exemplified the motto “That Others May Live,” but echoed the charge by Col. Russell Cook, 23d Wing Commander, ‘Tigers Lead!’” Godwin wrote.

The mission also validates the Jolly Green II, an aircraft that the Air Force search and rescue community says it needs to replace its aging fleet of HH-60G Pave Hawks, which have been in use since the 1980s and flown hard during the Global War on Terror. In 2018, Defense News reported that Pave Hawks at Kadena Air Base, Japan were “experiencing structural cracks and frequent maintenance issues that hamstring the fleet.”

“Usually what that entails is we find it, it goes to maintenance, maintenance sends back to their headquarters for approval to basically stiffen that area, put in bracing and all that, and then it comes back to us,” Capt. Chris Allen, an HH-60G pilot and flight commander, told Defense News of the cracks at the time. “And then we see the crack either go somewhere else or progress, or whatever. So that’s something we’re constantly fighting these days.”

All of the Pave Hawks under Allen were either approaching or had exceeded their 7,000-hour flight time lifespan, Defense News reported, and it’s likely the flight hours have only kept racking up since then. With that in mind, the Jolly Green II “will increase mission-capable rates over the HH-60G just by virtue of being a new helicopter,” Air Combat Command public affairs wrote in a February press release.

But the Jolly Green II is more than just a new helicopter: it also has better technology and range to bring Air Force search-and-rescue up-to-date. Among the changes are new multi-function displays that reduce the workload for aircrew.

“As a young HH-60G pilot, I had to carry a Panasonic Toughbook for a moving map and translate data from onboard aircraft systems onto a paper map I carried with me,” said said Lt. Col. John Larson, Air Combat Command’s Combat Rescue Helicopter System Management Office Branch Chief, in February. “This is no longer needed in the HH-60W, as you have all the information you need in the cockpit integrated onto the same display.”

The Jolly Green II can also carry twice as much gas as the HH-60G, according to Lockheed Martin, the manufacturer, which means it can fly farther to get to people in need. There are also better defensive systems and sensors, as well as an improved pilot’s navigation tool called the flight director, which has a better autopilot to help manage some of the tricky aspects of flying, such as hovering. Larson explained that 60W pilots can tell the flight director to maintain a hover, move in a direction, or even go-around “and let the aircraft fly relatively hands-free,” which is great in the chaotic world of combat search-and-rescue.

Among the many factors search-and-rescue aircrews have to manage are the location of the patients needing help; the presence of bad weather, enemy fire, or both; radio communications from both the people on the ground, other aircraft and higher-ups back home; and fire support who may be flying very low and need to avoid a mid-air collision.

“They’ll have notes in grease pen scribbled all the way down the window,” Allen, the Kadena-based HH-60G pilot, told Defense News in 2018, about special mission aviators, the enlisted air crew who ride in the back on a search and rescue mission. “Anytime new information comes through, they copy it down.”

The Air Force was supposed to buy 113 Jolly Green IIs to replace its fleet of 99 HH-60Gs, but the service came up short when it revealed its fiscal year 2023 budget request this March. Instead of 113 60Ws, the service set aside enough funds to buy only 75 total, about two-thirds of the original goal, according to Breaking Defense.

Why the drop in numbers? Air Force Secretary Frank Kendall said that search-and-rescue in a possible fight with China in the Pacific may not look like how they did in Iraq and Afghanistan. One of the key differences is that China has an advanced air force, whereas America’s enemies in the Global War on Terror did not.

“The scenarios that we’re most worried about are not the same as they once were,” Kendall told reporters in March, according to Breaking Defense. “When we were doing counterinsurgencies, and we were losing pilots in those kinds of situations, the needs were different. The acts of aggression like we’re seeing in Europe, or we might see the Pacific … put us in a very different scenario.”

Even so, the Jolly Green II may have some tricks up its sleeve when it comes to dealing with an enemy air force. In June, pilots with Moody’s 41st RQS fought a mock battle against a real-life Mi-24 Hind helicopter flown by U.S. contractors in order to practice flying in a contested air space.

“If we find ourselves in a theater that has a bunch of Hinds, and Hinds are very prolific throughout the world, this will better prepare us,” Maj. Matthew Keough, a pilot with the 41st Rescue Squadron, said at the time. “We get to fly the real thing, we get to see the real capabilities and real limits of the aircraft.”

In fact, helicopter-on-helicopter air-to-air combat maneuvers are similar to how U.S. fighter jets maneuver air-to-air, albeit much slower and lower to the ground.

Whether they are ferrying patients to Tampa or fighting off Hinds in a possible future conflict, the air crews of the Jolly Green II or the HH-60G carry the same mindset and values that the Air Force search-and-rescue community has held for decades. The name itself stems from the HH-3E Jolly Green and HH-53 Super Jolly Green helicopter crews who “pioneered” the modern art of combat search and rescue during the Vietnam War, according to the Air Force.

“Those who operate this aircraft will embody the motto, ‘These Things We Do, That Others May Live,’” then Air Force-Secretary Barbara Barrett said when the aircraft was named in 2020. “In the hands of our airmen, this aircraft ensures the rescue community can perform their duties better than ever.”