"There are areas in the jungle where you can only travel 100 meters in an entire day." 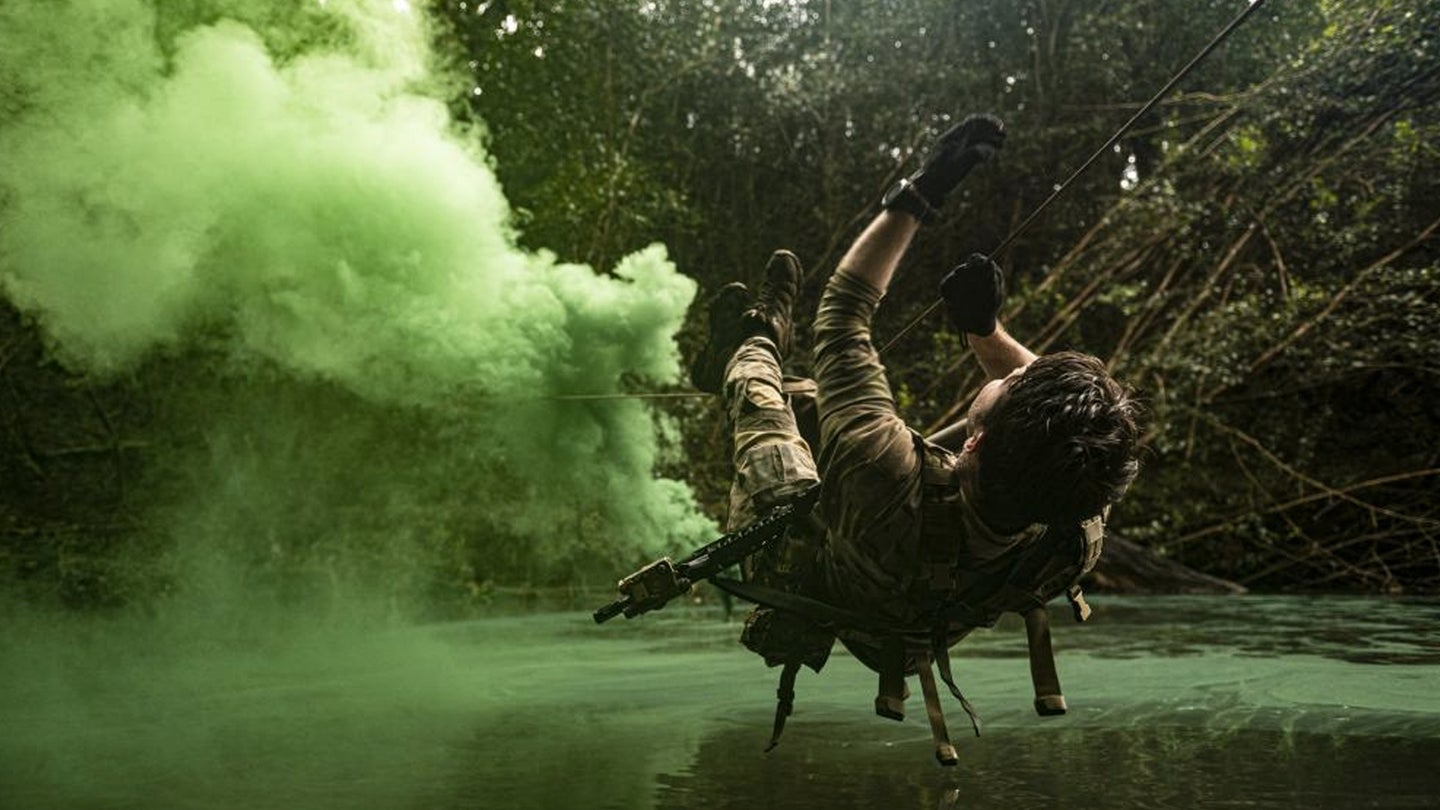 An all-expense-paid, two-week trip to Hawaii sounds fun, but maybe not so much if it involves living deep in the jungle with nothing but the ruck on your back. That’s what a group of Air Force pararescuemen from the 38th Rescue Squadron’s Blue Team discovered while training in Oahu recently, the third-largest of the Hawaiian islands. Pararescuemen are specialists in search and rescue and combat medicine, and the goal of the trip was to show the PJs how to track friendly troops, like a downed pilot, in the dense foliage of a Pacific jungle.

“The jungle is a very unforgiving environment,” said Lt. Col. Michael Vins, commander of the 38th Rescue Squadron, in a recent press release. “There are areas in the jungle where you can only travel 100 meters in an entire day. We need to be ready for that kind of environment by training there, understanding how to survive there, using different equipment … everything is so different, so we need to get used to that kind of environment to be effective in [Indo-Pacific Command.]”

Part of the reason why the jungle is so different is that over the past two decades of the Global War on Terror, the pararescue community has become accustomed to working in the deserts of the Middle East.

“Over the last 20 years, we’ve gotten really good at desert warfare with the war in Afghanistan and Iraq,” said Staff Sgt. Evan Rogowski, a PJ who took part in the Hawaii training, which lasted from March 26 to April 10. “With that kind of phasing away, and the new area of responsibility quickly becoming the INDOPACOM region, we’re really having to take a step back from some of the older [tactics, techniques and procedures] that seemed to work well in the desert and figure out how to adapt to this environment, which is way more difficult to operate in.”

The desert may be hot and dry, but the jungle is hot and humid. The tropical weather, plus the physical toll of moving through the jungle, can quickly lead to serious dehydration, while thick overgrowth “can mask dangerously steep drop-offs” according to the Hawaii Department of Land and Natural Resources.

“It’s pretty unpredictable out here in the jungle,” Rogowski said. “It can be raining in the morning and then completely sunny in the afternoon, and back to rain. Outside of carrying the proper equipment, there’s not much we can do to control that.”

On top of that, it is also difficult to stay quiet when moving in thick vegetation. Noise is dangerous for pararescue jumpers, who are trained to work deep in enemy territory where discovery could mean death. In this new climate, the airmen learned how to follow tracks and cover up their own. The press release did not share many specifics for how that’s done, but it involved the airmen tuning their senses to the most subtle changes in the undergrowth.

“That footprint is going to explain a story to you,” said Rogowski. “Where that person went, what they did, how fast they were moving, where they’re going to, are they paranoid? And I think that’s kind of hard to put into words unless you’ve actually been there.”

It takes time to get in the habit of looking for cues in the jungle, which is why the airmen spent several days and nights in the field, sleeping in hammocks and often communicating using hand signals.

“The more time you spend out in the field, you start to hone those senses,” said Pete Kerr, president of the Tactical Tracking Operations School, which provided instructors for the course. “What that’s doing is programming the subconscious mind to pick up on these indicators.”

The new environment was not the only thing that made jungle training different. In an era where the military is becoming more focused on cyber and electronic warfare tools, the jungle warfare course was distinctly low-tech.

“As highly trained special warfare operators, we’re always thinking about modern-day warfare and high-tech weapon systems, but something so primitive like grenades that roll out of bamboo if you kick the wrong stick over is enough to wipe us all out,” said Staff Sgt. Evan Orth, a pararescueman with the 38th rescue squadron. “Getting this training makes us more aware of threats we would have never expected in this environment, which could be the difference in saving not only our lives but the life of the person we’re trying to locate on the ground.”

Tracking itself is much the same as it has been for thousands of years. Trackers look for spoor, which means signs of a human or animal passing through the area. Examples of spoor include footprints, broken branches, overturned rocks or broken cobwebs.

“It’s an ancient hunting skill of following ground signs, aerial spoor, ground spoor,” Kerr said in 2013 after teaching tracking skills to a group of Marines. “Every time a human or animal passes through an area, it will leave signs.”

Those signs can help trackers learn much about an enemy without ever seeing them.

“You may not see troops moving through an area, but I can go in … and look at the ground and determine how many went through the area, direction of travel, what type of equipment they’ve been carrying with them or munitions or supplies, and how long ago it was,” Kerr said in 2013. “That’s good actionable intelligence.”

Kerr taught many Marines and soldiers how to use tracking to detect signs that improvised explosive devices had been planted in Iraq and Afghanistan. He said one Army scout unit claimed they had used Kerr’s training to detect 115 to 120 IEDs without detonation.

“It was huge,” the instructor said. “The more guys that survive their rotation, discover those IEDs, keep the routes open, that’s a good day.”

Though jungle warfare is new for many modern-day pararescuemen, it’s not new to the PJ community as a whole. In fact, the Air Force honed its rescue mission in the jungle during the Vietnam War.

“The PJ’s unique mission in Vietnam was to ride into a combat zone aboard a slow, vulnerable helicopter, and descend into jungles, swamps, mountains and forests on a cable and winch,” wrote the National Museum of the U.S. Air Force in an online article. “On the ground, they stabilized and helped hoist the injured to safety, often under fire.”

Pararescuemen in Vietnam earned more decorations per man than any other Air Force group in that conflict, the museum wrote. One of their most famous members was Airman 1st Class William Pitsenbarger, who completed more than 250 rescue missions to help friendly troops in need. On his last mission, at the age of 21, Pitsenbarger volunteered to be lowered to the ground from a search and rescue helicopter to help Army grunts load injured comrades onto litters. The infantrymen were surrounded by about 500 Viet Cong troops, but the jungle trees rose 150 feet into the air, according to the Museum of the Air Force, making it impossible for the rescue helicopters to land.

“On the ground, Pitsenbarger organized and speeded the evacuation, enabling the Huskies to rescue nine soldiers on several trips,” the museum wrote. “Normally, pararescuemen return to the helicopter, but Pitsenbarger chose to stay and help the beleaguered troops.”

The airman helped care for the wounded and hand out ammunition before being mortally wounded later that night. He posthumously received the Air Force Cross, which was upgraded to the Medal of Honor in 2000.

The mission of a pararescueman is a difficult one, especially since they are often called in only when things have gone horribly wrong. But should that happen somewhere in a Pacific jungle in a possible future war, the airmen of the 38th Rescue Squadron sound ready to help.

“The lessons and skills learned here will further expand the way we operate in the INDOPACOM area of responsibility,” said Rogowski. “We’ll take these lessons and shape our [tactics, techniques and procedures] for the future of special operations, personnel recovery, and combat search and rescue.”