“It’s not the prettiest thing but it got the job done." 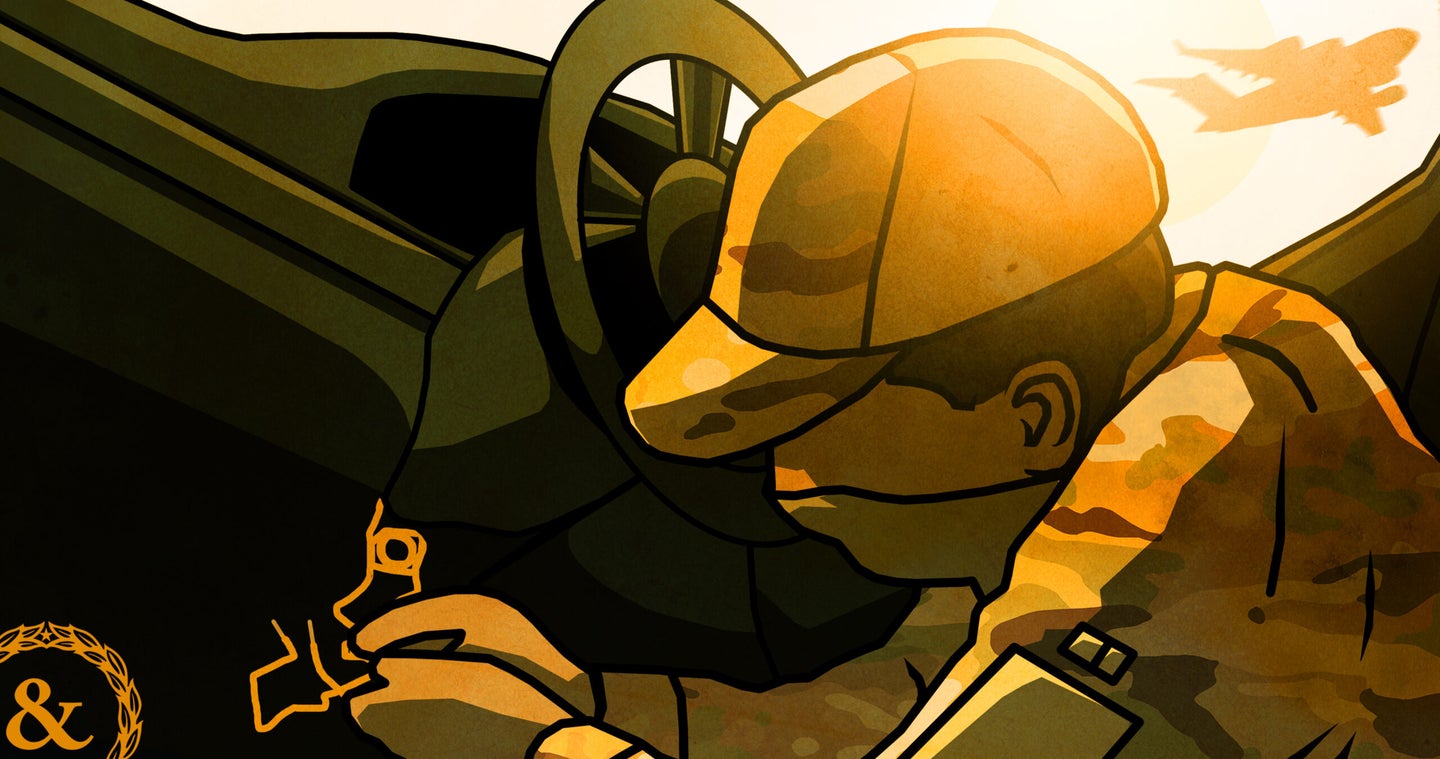 With few U.S. military vehicles on hand, troops had to hotwire abandoned vehicles to get around the airfield during the Kabul airlift. (Aaron Provost/Task & Purpose).
SHARE

Imagine this: you are in the Air Force and for the past two weeks you have worked 12 to 14-hour shifts on little sleep in the intense August heat of Afghanistan, where you are helping evacuate more than 124,000 people as part of Operation Allies Refuge, the largest non-combatant airlift in U.S. military history. You are tired and stressed when an odd sight appears: a beige up-armored Toyota Land Cruiser with the driver and passenger side doors removed and a fellow airman behind the wheel. Meet the “morale mobile.”

“It’s not the prettiest thing but it got the job done,” recalled the driver, Master Sgt. Jonathan Lange, who served as the first sergeant for members of the 621st Contingency Response Group which operated the airfield at Afghanistan’s Hamid Karzai International Airport (HKIA) during the evacuation.

As ‘first shirt,’ Lange was responsible for the morale, welfare, and conduct of his airmen during the intense mission, but his ‘morale mobile’ ended up doing some of the work for him.

“I would pull up to say ‘hi’ to somebody like ‘hey, how are you guys doing?’ and they saw this thing and they would just start laughing like ‘where did you get that?’” Lange recalled. “I’m like ‘eh don’t ask, man.’”

The ‘morale mobile’ was a small bright spot amid the suffering that occurred during the last days of the U.S. war in Afghanistan when thousands of Afghan evacuees attempted to flee Kabul as the Taliban regained control of the country. Many of the Afghans and Americans who participated in the evacuation were traumatized by the experience, but individual stories are still emerging of how U.S. service members risked their lives and came up with innovative solutions on the fly to save as many evacuees as possible.

One of those stories is how service members hotwired hundreds of abandoned vehicles that had been left behind by evacuees in order to get around the airfield during the evacuation.

“There were several people who were like ‘does anybody know how to hotwire a car?’” said Lange. “We have all these vehicles that we could be using to get around, because it’s not a small base and we need to get from here to there quick.”

Lange and the rest of the 621st Contingency Response Group will receive the Gallant Unit Citation later this year to honor “the actions its airmen took to rapidly repair and run airfield operations at Hamid Karzai International Airport while surrounded by hostile forces, enabling success of the operation,” Air Mobility Command said in an October press release.

With little time to prepare for the mission, the airmen from the 621st and other service members turned an airfield that had been breached by thousands of fleeing Afghans earlier in the month into a well-oiled evacuation machine, launching more than 100 aircraft a day filled with hundreds of people escaping Taliban rule.

“Think of an airport that shuts down for a good period of time and then becomes one of the busiest in the world with aircraft landing and taking off every five to 10 minutes,” said Col. Gregory Cyrus, the commander of the 621st CRG. “There was a day where we got 20,000 people out of that airport because we became very efficient and effective at managing the flow.”

The feat is all the more impressive considering how, when airmen first arrived at HKIA, there was no radar, only one functioning ramp on which to park aircraft, and few other facilities or equipment with which to run a busy airfield. Many of the contractors and Turkish security forces who had run the airfield before the start of OAR had either departed when their contracts dissolved with the collapse of the Afghan government, or had stayed but were not prepared to deal with the wave of evacuees in need of transport.

The airmen with the 621st Contingency Response Group are prepared for such occasions.

“We have all the capabilities that you need in one single unit to go operate any airfield,” Lange said. “We have leadership, command and control, aerial porters, air traffic control, airfield management, weather, security forces. If there’s a runway but no infrastructure, we go run it.”

One of those missing pieces of infrastructure at Kabul was ground transportation. Airfields cover large areas, and there were not enough U.S. military vehicles on hand for service members to get around.

Fortunately, there were hundreds of abandoned vehicles that had been left behind by Afghan troops and civilians, State Department employees and other evacuees.

“There were a whole bunch of vehicles left on one of the ramps, and some of them actually had keys in them,” said Maj. Thomas Leyden, an air mobility liaison officer who constantly drove around HKIA to find the right person to fix problems during the airlift. “I actually found a 4Runner that had keys in it and so I was like ‘oh this is perfect.’ I could use that instead of continually borrowing the air traffic control truck.”

Not all the abandoned vehicles had keys, so some airmen and other service members had to start the car by other means, like hotwiring.

“The whole scene out there was like ‘no rule Kabul,’” said Master Sgt. Brian Cantu, a security forces airman who helped keep the airfield secure during OAR. “If somebody left a vehicle there and you didn’t have the keys and you needed a vehicle: start her up.”

Learning how to hotwire a car is not part of Air Force basic training, but a few airmen and other service members knew the ropes and shared their skills. Though hotwiring cars is usually illegal, Cyrus emphasized that his airmen did it only in order to accomplish their mission.

“It was only for necessity, it wasn’t like ‘hey I’m going to joyride around the airfield,’” Cyrus said. “They grabbed one and they did their job and none of those cars came back [to the U.S.], they were all left there.”

Airmen were not the only ones who commandeered abandoned vehicles. At one point a few soldiers requisitioned a fire truck to get around the airport, and some Army paratroopers traded cans of dip for a Toyota Land Cruiser outfitted with an anti-aircraft gun, showcasing the ingenuity of American troops.

Army 1st Sgt. Eamonn McDonough, the operations sergeant for the 23rd Military Police Company at Fort Drum, New York, told Task & Purpose last year that hot-wiring vehicles is not exactly something law enforcement would typically condone, but in this instance, it was just about getting the job done. He laughed that when they got home, they explained to their soldiers they “can’t do that anymore.”

Another example where airmen improvised to complete the mission was when they found an old set of air stairs with which evacuees could board civilian passenger jets. Air stairs may be common on civilian airfields, but the airmen on the ground at HKIA had to figure out on the spot how to get this disused set working again. They succeeded, which allowed more evacuees to get aboard more aircraft in a shorter amount of time.

A few airmen even invented a new vehicle on the fly. The outdoor areas where thousands of evacuees awaited flights out of Afghanistan piled up with food wrappers and other garbage since there were not enough trash cans to handle the crowd. Luckily, airfields often feature Zamboni-like vehicles called tugs that are used for pulling aircraft around the facility. The airmen at HKIA took one of these tugs and strapped big plastic lids to the front, turning the tug into a slapdash street sweeper.

“They’re driving around in this little snow plow basically,” Lange recalled. ”I was just like ‘you guys are awesome.’”

Airmen also used motorcycles to drive down the runway to put down lights for guiding aircraft at night after the electrical generators powering larger runway lights went down.

“It was not a well-lit runway light but it was enough to help aircraft that did not have night vision goggles to be able to land,” said Leyden.

As hotwired vehicles ran out of gas, service members had to find other vehicles to take their place. The problem was that service members often wound up swiping vehicles that their colleagues were already using. One day Cyrus woke up to find that someone had ripped the steering column off the “‘follow-me”’ vehicle he had been using to guide aircraft around the airfield.

“For the next couple of nights I didn’t have any headlights, I was just using the hazards and a light on top of the car,” the colonel said.

Someone also swiped the car being used by one of Cantu’s airmen, “so we were all on the hunt trying to get his car back,” he said. They eventually found the car and got it back, but they had to keep an eye out for the rest of the operation.

“It then became a thing like, who can get the nicest car, because there were a bunch of Mercedes and Land Rovers and up-armored SUVs that were just there,” he said. “It was like ‘hey let’s go,’ I’ve never driven one of these before.”

Even high-ranking officers felt possessive of their newfound wheels. Cyrus recalled looking for the key that a fellow colonel had left for him in the wheel well of a Toyota 4Runner when a Marine one-star general confronted him about it.

“He goes ‘Colonel Cyrus, what are you doing? Are you trying to hotwire a car?’ And I’m like ‘no sir, I’m looking for the keys another colonel left for me,’” Cyrus recalled. “It was just funny because at that point everybody was protecting their cars. Everybody was trying to get a vehicle for whatever mission they were doing.”

Leyden kept the keys of his dependable 4Runner on him throughout the mission to prevent other service members from swiping it.

“I parked it in the cargo yard before I left and I forgot to put the keys back in,” he said. “I actually still have the keys in my house.”

Though the cars were left behind in Afghanistan, the skill of hotwiring them proved so useful that Cantu hopes to make it a part of training for certain Air Force job specialties.

“One of the lessons learned is that we should probably have somebody familiar with this,” he said. “That is some of the training that we are actually trying to get after, along with breaching and lock-picking. Just in case, you never know.”

Though hotwiring cars does not normally have a widespread reputation for saving lives, it was one of many small skills and innovations that helped rescue thousands of people in desperate circumstances.

“Knowing we were doing something good and we were having an impact gave everybody the motivation to power through any adversity there,” Cyrus said. “It is definitely a feel-good kind of mission when you’re saving lives.”