“It just required some significant out-of-the-box thinking by some of our maintainers.” 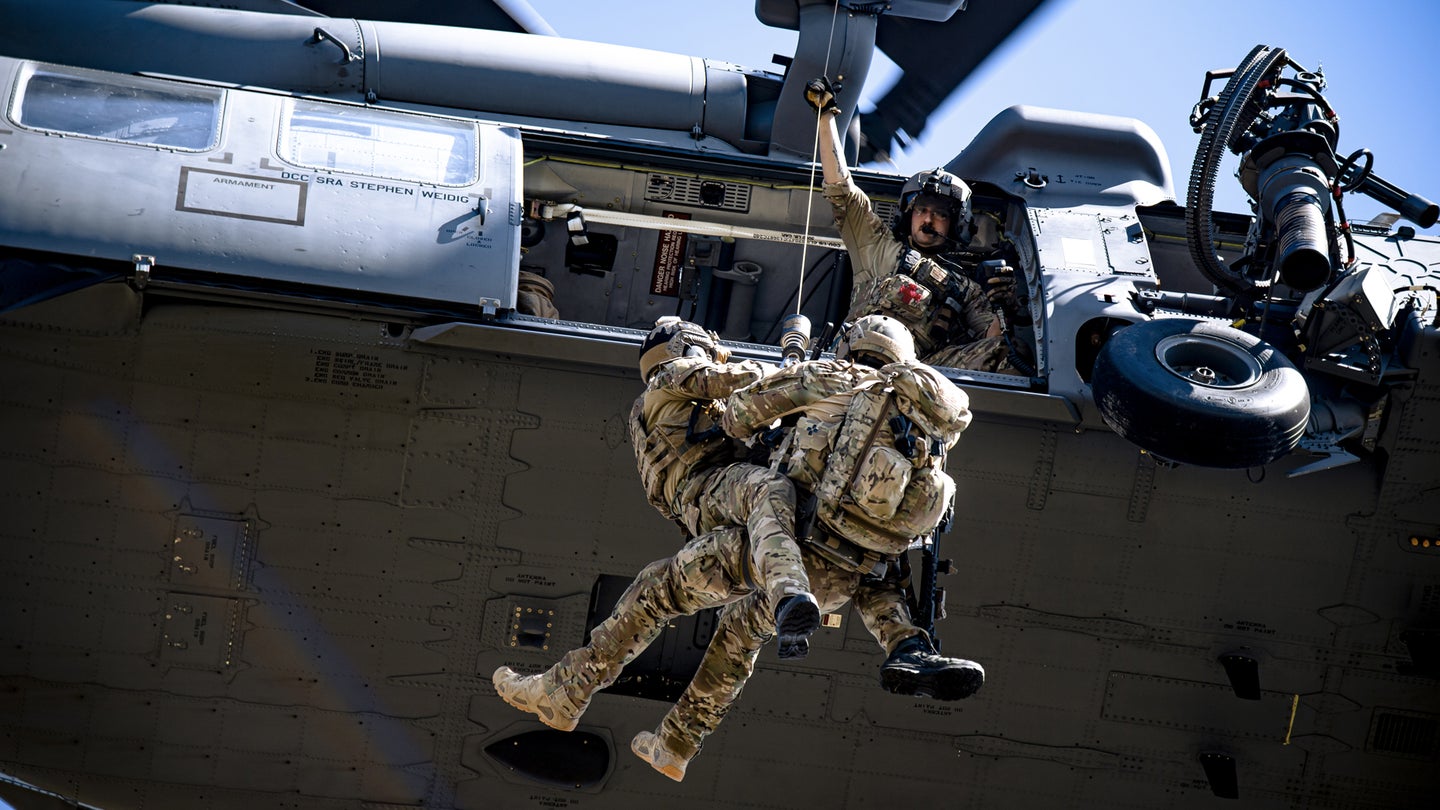 ‘Improvise, adapt and overcome’ is a well-known phrase in the military, and a few aircraft maintainers at Moody Air Force Base, Georgia took it to heart by fixing an issue that was affecting the Air Force’s newest rescue helicopter, the HH-60W Jolly Green II.

The Moody-based 41st Rescue Squadron had to get some serious training time on the new helicopter in preparation for its first deployment with the aircraft. The problem was that the squadron used up more hoist cables than they expected in training and now had a shortage, the base public affairs shop explained in a recent press release.

The hoist cables are an important piece of equipment: search and rescue airmen use them to pluck trapped or wounded service members or civilians out of spots that the helicopter cannot land in, such as the ocean, a forest fire, or difficult terrain. Like any other piece of equipment, the cables wear out over time and require replacement. What to do about it? The maintainers at the 41st Rescue Generation Squadron came up with a simple idea: use the cables from the older HH-60G Pave Hawk helicopters.

“We used our subject matter expertise to troubleshoot the issue,” said Staff Sgt. Nicholas Cellini, a flying crew chief with the 41st RGS. “We improvised and adapted to overcome the supply shortage, by using a cable that we know is reliable and the Air Force has plenty of.”

It may sound easy to just use the old helicopter’s cables in the new one, but it is not so simple. Staff Sgt. Devin Boyer, of the Moody-based 23rd Wing public affairs office, explained that the cables needed to be modified because the hoist mechanics on the 60W work differently than they do on the 60G.

“The HH-60W uses an electric hoist while the HH-60G uses a hydraulic hoist,” Boyer said. “Because of this, the tensions placed on the cables are different. This led to the airmen reconfiguring the cables to work with the HH-60W hoist.”

Col. Jason Purdy, commander of the 23rd Maintenance Group, added that both hoist cables are completely safe and can complete the exact same missions.

“It just required some significant out-of-the-box thinking by some of our maintainers to make sure it could meet the specifications of the mission and could be done safely,” he said.

Keep in mind that these systems are not the kind you can just duct tape to a new aircraft and call it a day. The hoist system cannot fail, otherwise it might jeopardize the principle that underpins the entire Air Force search and rescue community: “These things we do, that others may live.”

To make sure it was done safely, Cellini and his fellow airmen had to test and write operating procedures for converting the 60G cables to use in the 60W, the press release explained. They also had to make sure the cable would spool out of the 60W at the right speed. Engineers from Warner Robins Air Force Base, Georgia came by to provide safety checks and approve the process.

The safety checks continue even on the flight line. Lt. Col. Brough McDonald, a 60G pilot, said that hoist cables “are carefully inspected before any live use.”

“When we place an aircraft on alert for a scramble launch, we conduct what we call an H3, which is a Health Indication Test, Hover check (ensures accurate weight and performance calculations) and Hoist (carefully inspect the cable, hook and attachments),” he said.

The hoist is the latest spot of good news for the Jolly Green II. In September, the helicopter chalked up its first-ever rescue mission by flying a patient from the South Georgia Medical Center, about 10 miles southwest of Moody, to the Moffitt Magnolia Center about 200 miles south in Tampa, Florida. A few weeks later, the helicopter went on its first deployment, though the location of the deployment was not available.

“Bottom line, the future of Air Force Rescue is secure, and our team is ready to recover anybody, anytime, anywhere, against any adversary,” 23rd Wing commander Col. Russ Cook said at the time.

The Jolly Green II is designed to meet the needs of the Air Force search and rescue community by replacing its aging fleet of HH-60G Pave Hawks, which have been in use since the 1980s and flown hard during the Global War on Terror. The Jolly Green II “will increase mission-capable rates over the HH-60G just by virtue of being a new helicopter,” Air Combat Command public affairs wrote in a February press release.

The 60W also has better technology and range to bring Air Force search-and-rescue up-to-date. Among the changes are new multi-function displays that reduce the workload for aircrew. The Jolly Green II can also carry twice as much gas as the HH-60G, according to Lockheed Martin, the manufacturer, which means it can fly farther to get to people in need. There are also better defensive systems, sensors and an improved navigation tool called the flight director, which has a better autopilot for managing tricky maneuvers like hovering. Larson said 60W pilots can tell the flight director to maintain a hover, move in a direction, or even go-around “and let the aircraft fly relatively hands-free.”

The Air Force originally planned to buy 113 Jolly Green IIs to replace its fleet of 99 HH-60Gs. But in its fiscal year 2023 budget request revealed this March, the service set aside enough funds to buy only 75 total, about two-thirds of the original goal, according to Breaking Defense.

Air Force Secretary Frank Kendall said the smaller buy was because search-and-rescue may look different in a possible fight with China in the Pacific than it did in Iraq and Afghanistan. One key difference is that China has an advanced air force, whereas America’s enemies in the Global War on Terror did not. Even so, the Jolly Green II has a few tricks up its sleeve in terms of dealing with an enemy air force. In June, pilots with Moody’s 41st RQS practiced flying in a contested airspace by fighting a mock battle against a real-life Mi-24 Hind helicopter flown by U.S. contractors.

“If we find ourselves in a theater that has a bunch of Hinds, and Hinds are very prolific throughout the world, this will better prepare us,” Maj. Matthew Keough, a pilot with the 41st Rescue Squadron, said at the time. “We get to fly the real thing, we get to see the real capabilities and real limits of the aircraft.”

No matter what, the 60W at Moody won’t run out of hoist cables any time soon thanks to the hard work of its maintainers. Cellini credited his leadership for giving him and his airmen the go-ahead to pursue their idea.

“People say aircraft maintenance is pretty black and white, but some of it’s not,” he said. “Our leadership is open to ideas; as long as it’s safe and we can effectively and efficiently accomplish it, our whole chain of command will back us.”

Purdy seemed to think just as highly of Cellini and the other airmen under his command for taking the brand-new Jolly Green II by the horns.

“I’m very proud of our maintainers for leading the way on the HH-60W fleet,” he said. “Whether it’s been a hoist, a gun system, or a lapse in technical data, our airmen developed ways to make the entire program better.”