UNSUNG HEROES: The Corpsman Who Sprinted Into Gunfire To Save 5 Marines

On March 23, 2003, in Nasiriyah, Iraq, Luis Fonseca, a seaman apprentice, was a Navy corpsman on his first deployment,... 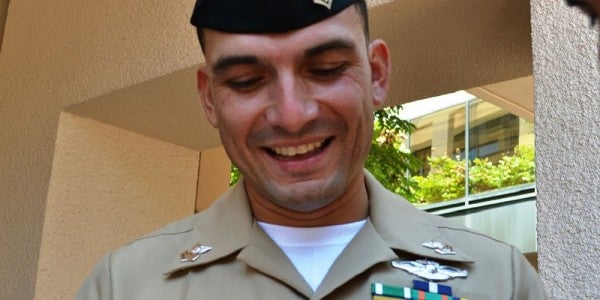 On March 23, 2003, in Nasiriyah, Iraq, Luis Fonseca, a seaman apprentice, was a Navy corpsman on his first deployment, assigned to the Marine Corps’ 1st Battalion, 2nd Marine Regiment, Fonseca’s unit was tasked with capturing and holding the northernmost of three bridges: Saddam Canal Bridge.

Dubbed the battle of Nasiriyah, this was to become one of the first major fights of the Iraq War, and would ultimately claim the lives of 18 Marines that day, and 12 more before the most heated fighting ended almost a week later.

Shortly after seizing the bridge, all hell broke loose.

The Marines fell under a complex ambush, taking fire from small arms, heavy machine guns, rocket propelled grenades, mortars, and artillery. Within moments the call came in: five Marines were down after a Marine assault amphibious vehicle, called an amtrak, took a direct hit from a rocket propelled grenade. It was early in the Iraq war, the Marines weren’t fighting insurgents at this point — this was Saddam Hussein’s army.

“The job of a corpsman is to go through hell and back for your Marines,” said Fonseca, of the battle, in a Navy report, in November 2004. “My brothers needed me, so I was going to be there for them.”

Grabbing his medical supplies, Fonseca rushed to the smoking vehicle where the injured had been pulled from the wreckage by their comrades and laid out on the ground. Still under enemy fire, and by no means safe, Fonseca established a casualty collection point and began treating the injured Marines.

“I noticed I had two patients with partial lower-leg amputations, one with flash burns to his eyes, and all had shrapnel wounds,” Fonseca said, in a 2008 article by the Department of Defense. “I applied tourniquets on the two Marines with the partial leg amputations and instructed the other Marines around to apply battle dressings on the others that were wounded.”

The battle continued in earnest, transforming from a sudden ambush to a six and a half hour firefight. Knowing he and the injured Marines couldn’t remain where they were, Fonseca decided to move them back to the evacuation amtrak, but just as he made his way to it, the vehicle was disabled by enemy fire.

Fortunately, reinforcements arrived shortly after and another vehicle was able to make it to the wounded men, but couldn’t take all of them.

Eventually helped arrived, and once his last charge was safe, Fonseca turned and headed back to the fight, rejoining his platoon.

For his heroism and composure under fire, Fonseca was awarded the Navy Cross, the nation’s second highest award for valor, on Aug. 11, 2004. Of the award, Fonseca said he considers it second to the camaraderie and friendships forged under fire, reports the Stars and Stripes

“To be perfectly honest, being accepted by this tight-knit community … makes me more proud of who I am and what I do than the Navy Cross,” said Fonseca of the Marines he served with and cared for.

Whenever he’s asked about his actions under fire, what he did, and how to prepare for it, Fonseca provides the hard-earned perspective of one who has seen violence and death first hand

The lesson: It doesn’t matter how much you train and prepare if you fail to do your job when it matters most.