On Dec. 18, a brand new Amtrak train endured a horrific accident during its inaugural trip from Seattle to Portland,... 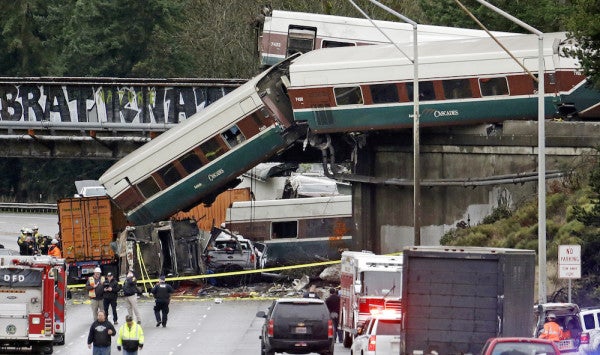 On Dec. 18, a brand new Amtrak train endured a horrific accident during its inaugural trip from Seattle to Portland, Oregon: Rocketing along a stretch of track outside Tacoma at nearly 50 mph over the designated speed limit, the powerful locomotive derailed over an interstate highway, plunging from an overpass across multiple traffic lanes, taking its passenger cars with it.

Second Lt. Robert McCoy, an Army medic assigned to the 56th Multifunctional Medical Battalion,62nd Medical Brigade at Joint Base Lewis-McChord just a few miles southwest of Tacoma, was driving along Interstate 5 when he saw the train fall from the overpass. “The train is going south and I’m just kind of driving, just driving,” McCoy told the local Fox News affiliate.

“I hear a loud noise and I look up and I see the train and it hits the concrete walls on the side and when it hits the walls — the walls kind of exploded — and the train just falls off.”

The scene was understandably chaotic. Unsuspecting passengers were catapulted from their seats, with survivors pinned beneath wreckage and trapped in bathrooms by the impact, screaming for help, the New York Times reports; one survivor told the newspaper that the incident “felt like the end of the world.”

But for McCoy, there was only one course of action: act.

The train plowed into three vehicles ahead of McCoy’s pickup truck, ejecting passengers over the highway. After stopping his truck, the soldier grabbed a CPR mask and tourniquet before rushing to aid survivors. (Representatives for Joint Base Lewis/McChord did not immediately respond to request for comment.)

There were individuals who had been ejected from the train onto the pavement,” McCoy said. “And so my first initial thought was, I don't know how stable this is. If this train continues to fall, it's gonna fall on these individuals.”

After pulling survivors to safety, McCoy said, he and another volunteer rushed to evacuate one of the train cars suspended precariously over the highway, clambering onto the roof of a damaged semi-trailer truck. He told Fox News that “there were people yelling, there people looking for each other, looking for loved ones.”

At least three people were killed and around 100 were injured, according to National Transportation Safety Board officials. But the numbers could have been worse.

While local media have hailed McCoy as a hero, the soldier demurred: He was just doing what the Army trained him to do.