As floodwaters from the raging Missouri River began to engulf buildings and runways at Offutt Air Force Base in Nebraska in March, one retired officer was racing through the headquarters of the 55th Wing on a unique rescue mission: to save as much as the Wing's history as he could 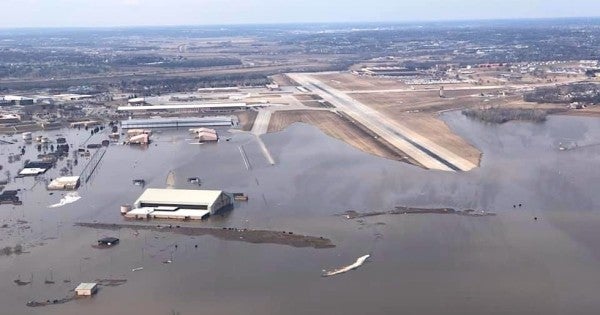 As floodwaters from the raging Missouri River began to engulf buildings and runways at Offutt Air Force Base in Nebraska in March, one retired officer was racing through the headquarters of the 55th Wing on a unique rescue mission: to save as much as the Wing's history as he could.

A fantastic Omaha World-Herald story details the efforts of retired Lt. Col. Mike Hoskins, a 28-year Air Force veteran and the 55th Wing's deputy director of exercises and plans, to hastily salvage historical documents and memorabilia from the Wing historian's office — an effort that included not only breaking down the door, but grabbing a stretch limo for an impromptu convoy.

Thanks for the shout out, Jared. Mike Hoskins assured me the stretch limo has its own memorable history tied to 55th Wing road trips. Probably only to be told at bars. pic.twitter.com/FeEe1IbpLl

From the Omaha World-Herald (emphasis ours):

In less than an hour, Hoskins — the Wing's deputy director of exercises and plans — and a small group of airmen salvaged many historical items from McQueney's office and several others. At the same time, a similar effort was underway nearby at the headquarters of the 343rd Reconnaissance Squadron.

Hoskins worked with an RC-135 navigator, Maj. Ian (Air Force rules prohibit publishing his last name because of the sensitive nature of his job) and Tech. Sgt. Matthew Sabo, as well as several others, to remove items as fast as they could.

They had two pickup trucks and Hoskins' car, a blue 1992 Cadillac stretch limo that once belonged to some members of the Wing.

Those items aren't just dusty old trophies and textbooks, but critical pieces of Air Force history: Founded in 1941 as the 55th Pursuit Group fighter wing, the “Fightin' Fifty-Fifth” is older than independent branch itself. And based on the reporting of the Omaha World-Herald, some of the items that Hoskins and his small team of service members managed to salvage clearlyrequired the space afforded by a stretch limo:

[Hoskins] started with two items on loan from the National Museum of the U.S. Air Force in Dayton, Ohio: a giant Fairchild K-18 aerial reconnaissance camera from the 1940s and a propeller from a World War II-vintage P-51 Mustang fighter plane. It took two men to carry the camera.

They saved uniforms donated by the family of retired Col. John McKone, a crew member aboard a 55th Wing RB-47 jet shot down by a Soviet fighter over the Arctic in 1960. He and the only other survivor, Bruce Olmstead, were captured and interrogated for months at the KGB's Lubyanka prison in Moscow. McKone and Olmstead are revered by 55th Wing veterans.

The eight-foot floodwaters from the Missouri River put a third of Offutt underwater and severely damaged at least 30 buildings. According to outgoing Air Force Secretary Heather Wilson, the service will need an extra $5 billion over the next three years to repair extreme weather damage to Offutt and Tyndall Air Force Base, which was devastated by Hurricane Michael last year.

Hoskins' rescue efforts sound like a real race against time. Sabo, the tech sergeant who volunteered one of the pick-ups used to shuttle artifacts to higher ground, even ended up losing his Dodge to the flooding — although he clearly didn't regret it.

“The truck was a tool,” he told the Omaha World-Herald. “It can be replaced, unlike this stuff.”

When disaster strikes, some units aren't always as fortunate to even have the opportunity to save years of historical memorabilia. So we salute you, Hoskins, and your active-duty volunteers for safeguarding these pieces of the Fightin' Fifty-Fifth's heritage. May your cup, not the Missouri River, always runneth over.

SEE ALSO: That 'Mysterious Fire' At 1st Battalion, 6th Marines HQ Resulted In $100,000 Of Damages, And Is Officially 'Suspicious'

WATCH NEXT: The Nebraska Army National Guard Airdrops Bales Of Hay For Cattle Trapped By Flooding