The leg was swaddled in plastic and kept in a freezer when the lawyers came for it. Amputated below the... 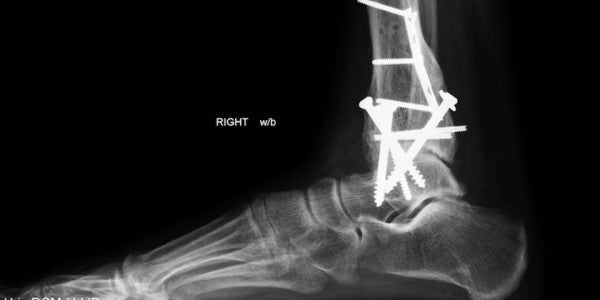 The leg was swaddled in plastic and kept in a freezer when the lawyers came for it.

Amputated below the right knee, it had been frozen, thawed and frozen again since its donation more than a year earlier. It had variously been left out in a grass field, hidden in bushes and tucked under a log.

But otherwise, the lower portion of Timothy Kuncl’s right leg seemed in remarkably good condition, he said — much better, at least, than the last time he’d seen it.

“It just looked pale and Washingtonian, not like the angry piece of flesh that used to be on my body,” said the 46-year-old ex-Coast Guardsman and father of four.

Since its recovery in July 2016 from a local nonprofit that used it to train rescue dogs, Kuncl’s amputated limb has become a key piece of evidence in a federal legal dispute. Its very existence may help Kuncl prove his case that negligent medical treatment at the U.S. Department of Veterans Affairs’ Puget Sound Health Care System ultimately caused him to lose his leg, according to court records filed last week.

“The X-ray films are good, but even though they’re high quality, they’re two-dimensional,” James Holman, a Tacoma-based attorney, said during a recent interview. “So, what could have been contested by radiology experts in court can’t be contested now, because we have the actual foot and the screw sticking in it.”

That they do — more than two years after the leg’s amputation — is a stroke of what Kuncl bleakly described as “my ironic luck.”

Kuncl’s ordeal began in December 2011, when he slipped from the roof of his Puyallup home while hanging Christmas lights. He fell more than 20 feet onto a concrete driveway below, shattering his lower right tibia on impact.

Over the next two and a half years, Kuncl underwent three surgeries at the VA hospital in Seattle to install or remove metal plates and screws and infuse bone grafts into his fractured bone. Between and after his surgeries, Kuncl received other treatments and physical therapy during a prolonged attempt to rehabilitate.

Related: The VA Refused To Pay For This Father-Son Kidney Transplant »

But the VA’s medical work only intensified his pain, Kuncl said. When he could stand it no longer, he ditched his fully covered veteran’s health-care treatments and turned to a private surgeon to amputate his leg in December 2014.

About a year later, Kuncl contacted Holman, who later sued the federal government for medical negligence. The lawsuit contends the VA’s doctors and other health-care professionals botched Kuncl’s medical treatment, leaving him with a leg filled with misplaced and broken surgical hardware, an unfused fracture and no other option but to amputate.

“As set forth in our court filings, we deny there was any negligence on the part of the VA and its providers in the treating of Mr. Kuncl,” spokeswoman Emily Langlie said. “The VA providers met the standard of care and we will defend the allegations vigorously in court.”

Hundreds of documents detailing the VA’s treatment of Kuncl exist in his medical file. But the key records — X-rays depicting his hardware-riddled ankle — might have remained open to dispute by defense experts, Holman said.

Then, in mid-2016, Kuncl dropped a bombshell on his lawyer.

“I told him that I’d tried to do a really good thing by giving my leg to the dog people,” Kuncl recalled. “And he said, ‘Wait a minute. You mean the leg still exists?’?”

In the aftermath of his amputation surgery, Kuncl had sought to salvage what good he could from that wretched chapter in his life by donating his limb to Northwest Disaster Search Dogs, a nonprofit that trains canines to locate victims of mass casualty incidents.

The Western Washington-based team — which has sent dogs to such national disaster sites as the World Trade Center terrorist attacks and the Space Shuttle Columbia explosion — from time to time has received gifts of teeth, small bone fragments and cadaver materials from dentists and medical examiners.

“But this was a pretty unusual donation,” said Kent Olson, a dog handler for the team.

“We’ve never had such a large piece before, and the dogs react differently,” Olson said. “They normally don’t come across that in training. But in disaster-type situations, it’s not unusual to come across larger body parts, so this definitely helped our dogs to be able to detect those.”

After receiving Kuncl’s gift, the group protected the leg and used it sparingly during specialized training scenarios.

“We kept it wrapped in several layers of plastic and in plastic bags and in a freezer,” Olson said.

And that unintentionally helped to preserve the leg as evidence.

“That wasn’t the reason I gave them my leg,” Kuncl said. “It was just one of the few times in my life that I did things for the right reason, and it turned around to benefit me.”

After Kuncl’s legal team retrieved the limb, a forensic pathologist conducted a videotaped examination in July with a U.S. attorney present, Holman said.

The exam confirmed Kuncl’s suspicions: that the VA’s surgeons inserted an orthopedic screw into his ankle that further damaged and exacerbated his injuries.

“My opinion, given with a reasonable degree of medical certainty, is that Mr. Kuncl’s tibial nerve was damaged by the scar tissue associated with an orthopedic screw tip protruding from a bone in his ankle,” Dr. J. Matthew Lacy wrote in his post-examination report.

Kuncl’s case is now set for trial in October. But with the latest twist, he hopes for a quicker resolution. Since the amputation, Kuncl has struggled with further medical complications, as well as coping with his new reality, he said. He recently watched a video of the pathologist’s exam on his amputated leg.

“Seeing that really messed me up,” he said. “But I had to see it. I had to understand what happened to me.”