Veterans approve of Trump as commander-in-chief, but they don’t necessarily trust him to wage war

U.S. military veterans may not trust President Donald Trump as commander-in-chief, but that doesn't mean they don't love him anyway. 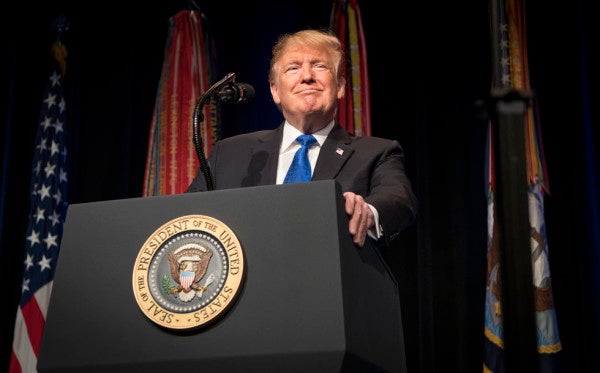 U.S. military veterans may not trust President Donald Trump as commander-in-chief, but that doesn't mean they don't love him anyway.

A new analysis of two polls of more than 2,300 American veterans conducted by the Pew Research Center indicates that a majority (57%) of vets approve of Trump's performance as commander-in-chief, far outstripping civilian support (41%) for the president's command of the U.S. armed forces.

This approval rating comes with a partisan bent, naturally: Pew indicates that Republican-leaning veterans — who, at 59% of veterans overall, outnumber Republicans as proportion of the civilian population (44%) — tend to support Trump more than Democratic veterans, a reversal of approval ratings for President Barack Obama during his time as commander-in-chief.

But what's really interesting about the Pew data is what veterans don't like about the commander-in-chief. Nearly half (45%) of respondents say Trump “doesn't listen enough to military leaders in making national security decisions,” while a a similar share say they “have little trust in him to make the right decisions about the use of military force.”

This is fine! Everything is fine! How are you?

SEE ALSO: Some Members Of Congress Are Finally Realizing That Authorizing Wars Without End Is Really Bad