There may be more. 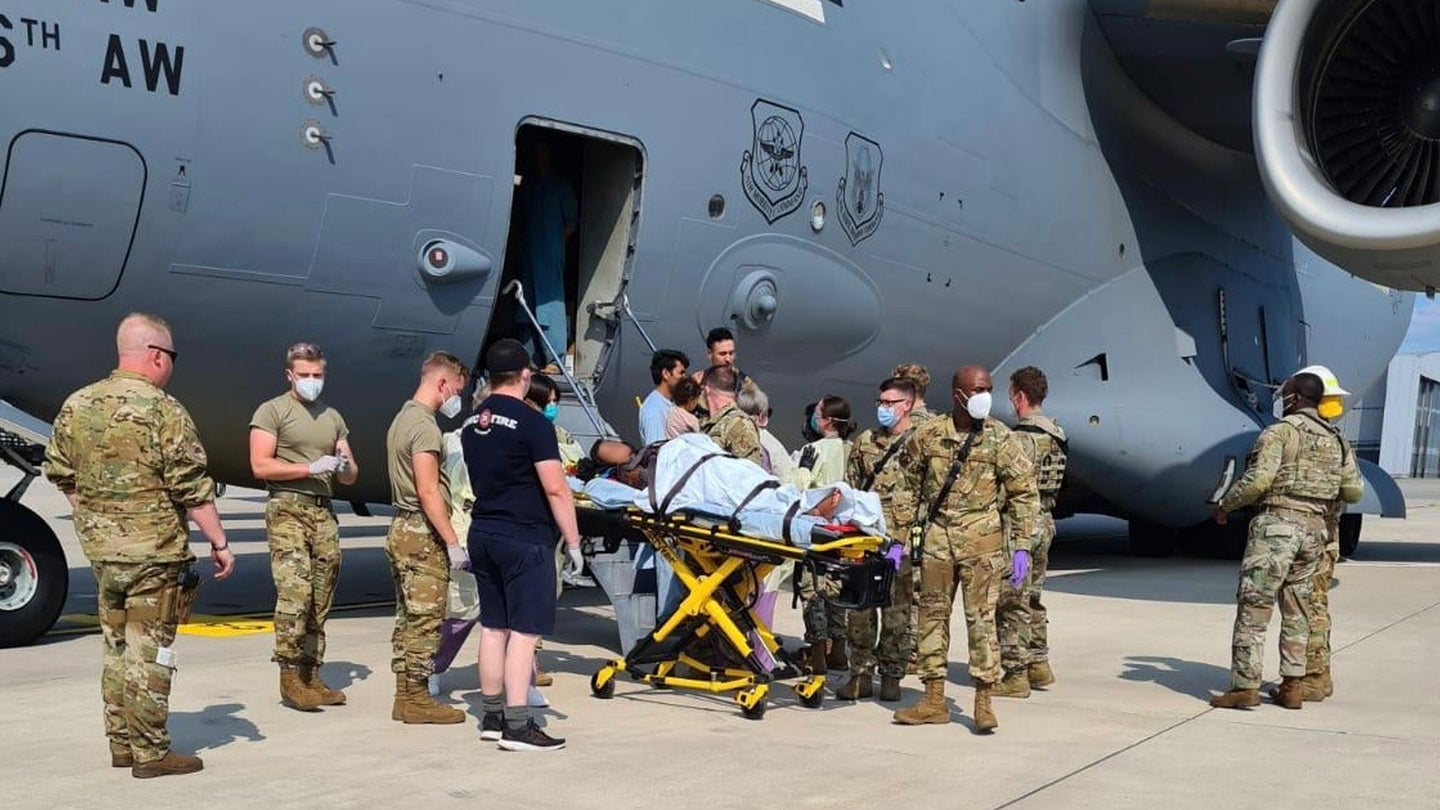 Editor’s Note: This story has been updated with additional details regarding where the three children were born.

Amid the collapse of the Afghan government and the flight of thousands of refugees from Afghanistan, there was a bright spot in the fact that three babies were born safely amidst the U.S. evacuation from country.

Army Gen. Steve Lyons, the head of U.S. Transportation Command, told reporters on Monday that he is aware of three babies born to Afghan refugees during the evacuation effort, though there may be more that he is unaware of since he does not have “a formal tracker,” he said.

The most well-known of the three babies was a baby girl born on Saturday when a band of U.S. Air Force crew members and medical experts helped an Afghan woman deliver her aboard a C-17 transport jet at Ramstein Air Base, Germany.

The C-17 was flying from an unnamed base in the Middle East when the mother went into labor, according to a statement released by Air Mobility Command. She began experiencing complications due to low blood pressure, so the aircraft commander decided to take the plane down to a lower altitude to increase air pressure in the jet, the statement said. The decision saved the mother’s life. The jet soon landed at Ramstein, where airmen from the 86th Medical Group came aboard and delivered the child in the C-17’s cargo bay.

“The baby girl and mother were transported to a nearby medical facility and are in good condition,” the statement read.

The story is “really exciting,” Lyons said. “I mean I really appreciate the news reporting on the baby being born as that flight came into Ramstein. As a matter of fact, there’s actually been more than that, so it’s just an incredible, incredible operation ongoing, you know, just impressive work by our great airmen.”

One Facebook commenter reacting to the news of the Ramstein baby had an excellent suggestion for the C-17 crew.

“Now they need to add a pink [stork] to the entrance like are added to ambulances after a birth,” they said on Facebook, referring to the paramedic practice of putting a stork decal on their ambulances after helping deliver a baby.

A second confirmed child was born on Monday aboard a C-17 at Al Udeid Air Base, Qatar, also upon landing, Air Mobility Command spokesperson Maj. Hope Cronin told Task & Purpose. At least one other woman went into labor aboard a C-17 that arrived at Al Udeid from Afghanistan at some point over the last week, but she delivered her baby in an off-base hospital in Doha after being transported there by ambulance, Cronin said.

“The babies and parents are all doing fine,” she added.

The story was one of several good-news moments to emerge from Afghanistan this weekend as American service members rushed to secure the Kabul airport and evacuate Afghans who worked for the U.S. during its 20-year war there. For example, on Thursday, footage emerged of a U.S. Marine helping an infant get over a wall into safety; on Friday, Air Mobility Command announced that one of its C-17s had set a new record for fitting 823 refugees onto a single flight; and bases throughout Europe and the Middle East posted pictures of refugees making it to temporary shelters set up there.

“This is what our airmen do,” wrote the Air Force’s top enlisted leader, Chief Master Sergeant of the Air Force JoAnne Bass, in a Facebook post about the airlift on Thursday. “No matter the situation, they persevere and deliver hope to those in need. I am honored to serve alongside them.”

By Monday, Defense Department officials announced that they had evacuated about 37,000 people out of Afghanistan since evacuation efforts began on Aug. 14. Some of them were taken to U.S. installations in Qatar, the United Arab Emirates, Kuwait, Bahrain, Spain, Italy, and Germany, where U.S. officials will complete their screening and security checks as part of the Special Immigrant Visa process. Others may soon find themselves at four bases being used to house evacuees: Joint Base McGuire-Dix Lakehurst, New Jersey; Fort McCoy, Wisconsin; Fort Bliss, Texas; and Fort Lee, Virginia.

“We have intelligence and law enforcement personnel at these sites making sure a robust screening is done of these individuals,” Pentagon spokesman John Kirby explained on Monday. “So that nobody comes into the United States that hasn’t been screened in a robust manner.”

Air Mobility Command did not respond in time to a question about whether or not the newborn baby girl is an American citizen, but it’s unlikely. U.S. military bases overseas are not U.S. territories, according to the State Department. Children born on bases overseas may still be U.S. citizens if their parents are, but it was unclear if that was the case for the baby girl born at Ramstein. Either way, questions of citizenship seem to be taking a backseat to common humanity, at least at Ramstein.

“Inscribed on the bottom of the Statue of Liberty is, ‘Give me your tired, your poor, your huddled masses yearning to breathe free,” Maj. Gen. Derek France, the Director of Operations, Strategic Deterrence and Nuclear Integration for U.S. Air Forces in Europe and Air Forces Africa, in a Facebook post on Sunday. “We’re about to receive a lot of people who fit that description; and need our help.”