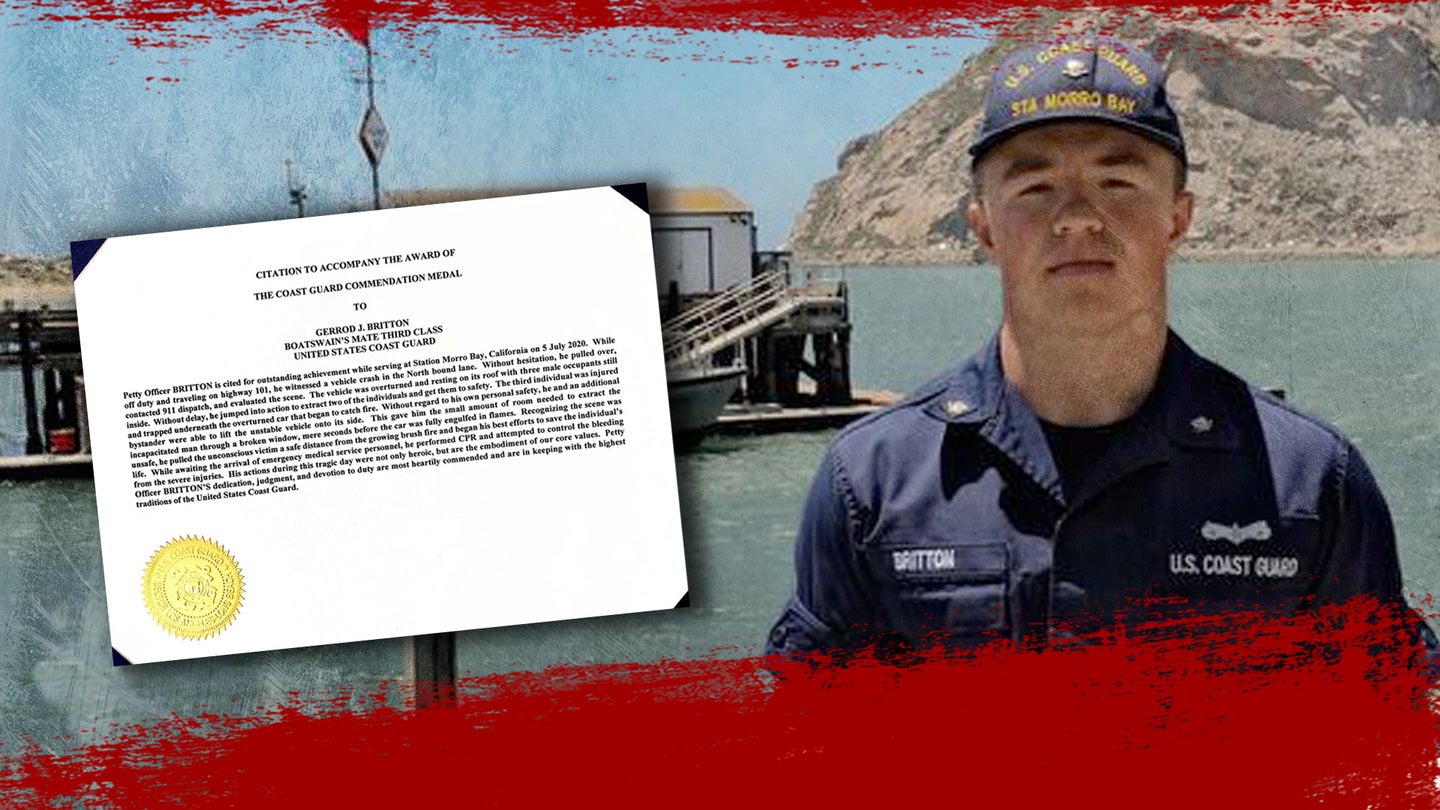 When an off-duty Coast Guardsman witnessed a car crash on Highway 101 along the California coast, he didn’t hesitate before springing into action.

On July 5, 2020, Boatswain’s Mate 3rd Class Gerrod Britton saw a car lose control while traveling north along the highway and crash on the road. The vehicle came to a stop on its roof, with three men trapped inside. And then it began to catch fire.

According to a citation for the Coast Guard Commendation Medal, Britton reacted immediately. He quickly pulled over, called 911, and then without pause or consideration for his own safety, he ran to help. With the aid of a bystander, Britton flipped the car from its roof onto its side — the award makes no mention of equipment, and given the speed with which they acted, the duo presumably muscled their way through it.

Once the car was on its side — still lightly smoldering, mind you — it gave Britton just enough room to begin pulling the trapped occupants out, one of whom was incapacitated and had to be pulled through a broken window. Britton was able to get all three free from the burning wreck “mere seconds before the car was fully engulfed in flames,” according to the award citation.

Knowing they were still in danger, Britton pulled the unconscious man to safety, dragging him away from the flames which had now engulfed the bushes and grass nearby, turning into a brush fire. As they waited for emergency responders, Britton did his best to keep the injured man alive, performing CPR and attempting to stop the bleeding from the crash victim’s severe injuries. The award citation and an accompanying social media post from the service do not make it clear if the injured man survived the ordeal.

Britton was recently recognized for his actions and presented the Coast Guard Commendation Medal, according to a post on Saturday from the official Facebook account for U.S. Coast Guard Station Morro Bay, California, where he’s stationed.

The young Coastie joins a long and proud tradition among his service, one known for brave rescues and heroic interventions, whether that be on the high seas riding a narco submarine like a bucking bronco, or shooting warning shots at a mako shark as it circles swimmers in the open ocean.

“His actions during this tragic day were not only heroic, but are the embodiment of our core values,” reads the closing passage of his award citation. “Petty Officer Britton’s dedication, judgement, and devotion to duty are most heartily commended and are in keeping with the highest tradition of the United States Coast Guard.”