The Military Has A Plan To Make Earth-Friendly Munitions

It’s not everyday you meet a hardened warfighter with a green thumb. Service members are mostly trained to crater enemy... 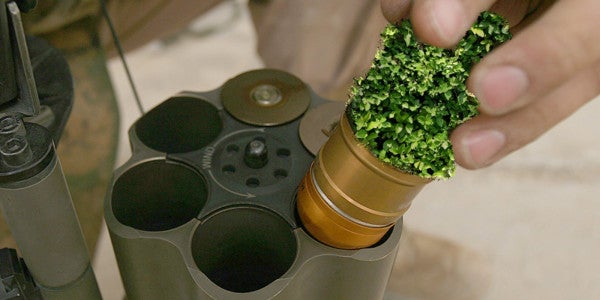 It’s not everyday you meet a hardened warfighter with a green thumb. Service members are mostly trained to crater enemy training camps, not plant daffodils. But that could change soon.

Through the government’s Small Business Innovation Research program, the Department of Defense is looking for a company to create biodegradable training rounds, studded with actual seeds, to keep trigger-happy troops from pumping the land full of lead. According to the proposal request, outdated low-velocity ordnance have components that can take a century to biodegrade while contaminating soil and groundwater.

Assuming a partner steps up with a solid plan, service members firing everything from 40mm grenade launchers up to 120mm tank rounds could be playing a deadly version of Johnny Appleseed at their respective proving grounds.

The Army Corps of Engineers Cold Regions Research and Engineering Lab has already shown that certain bioengineered seeds can be embedded in biodegradable composites. After being shot, the seeds can lay dormant for months before sprouting into environmentally friendly plants that will help remove soil and silt contaminates and be safe for the local animals to eat … once all the mortarmen and M1 Abrams tanks roll out, of course.

The proposed training rounds would be constructed of engineered biodegradable plastics — not unlike the stuff used to make biodegradable water bottles and other containers — possibly mixed with bamboo fiber.

The earth-friendly new training rounds would solve a real problem that has bedeviled the military’s proving grounds for decades. Several years of blasting off ordnance can leave a devastating impact on the environment. Currently the old California post Fort Ord is undergoing elaborate and expensive cleanup operations to remove remnants of heavy munitions. Because Fort Ord is an empty, mountainous region of California that has been used for training since WWI, there’s a lot to pull out of the ground.

Going green has been a goal of the U.S. military for years. Climate change and global warming are considered a serious threat to national security, and have been tied to the war in Syria and the rise of Boko Haram and ISIS. Rising sea levels are also expected to damage naval ports and may contribute to the biggest refugee crisis humanity has ever faced.

The proposed seed bombs are just one new weapon in the military’s growing arsenal of sustainability strategies. Some bases are being fitted with solar arrays to generate energy while others are providing refuge for for hundreds of endangered and at-risk species from coast to coast.

Plus, if the military figures out a way to plant poppy seeds in the ordinance we’re dropping in Afghanistan, we might actually manage to win the war and pay for it at the same time.