The family of Richard Overton, America's oldest living World War II veteran, is asking for everyone to pray for his... 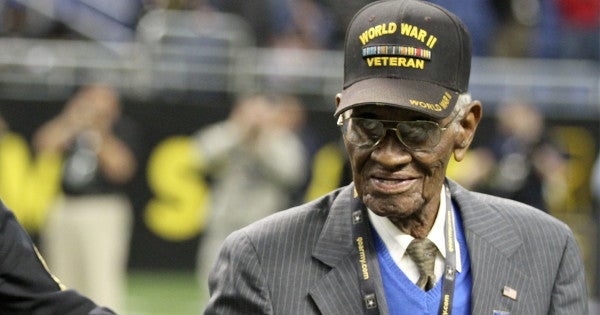 The family of Richard Overton, America's oldest living World War II veteran, is asking for everyone to pray for his recovery after the 112-year-old was hospitalized on Wednesday with pneumonia.

“He needs everybody's prayers,” his cousin Volma Overton Jr. told KXAN, while adding that prayers worked the last time he was hospitalized in August.

Born May 11, 1906, Overton served in the South Pacific during the war before selling furniture in Austin, Texas after discharge and later working in the state Treasurer's Office, according to The Houston Chronicle.

He earned national media attention and a visit with then-President Barack Obama in 2013, due to his advanced age and unorthodox habits he claimed were keeping him healthy.

“He drives and walks without a cane. During a television interview in March, he told a reporter that he doesn't take medicine, smokes cigars every day and takes whiskey in his morning coffee. The key to living to his age, he said, is simply 'staying out of trouble,'” The Chronicle wrote.

“I may drink a little in the evening too with some soda water, but that's it,” Overton told Fox News. “Whiskey's a good medicine. It keeps your muscles tender.”

Overton is being treated at St. David's Medical Center in Austin.

“This is probably his third time fighting pneumonia this year, and he's been to the hospital twice for it,” Volma told The Austin-American Statesman. “It hit him hard, but they're taking wonderful care of him.”

WATCH: MARSOC: The Legacy Of The Marine Raiders