Officials: ‘Clown Penis’ Is Not A Realistic Callsign For Pilots

Despite what you may have seen on television, it is extremely unlikely that a fighter pilot would have the callsign... 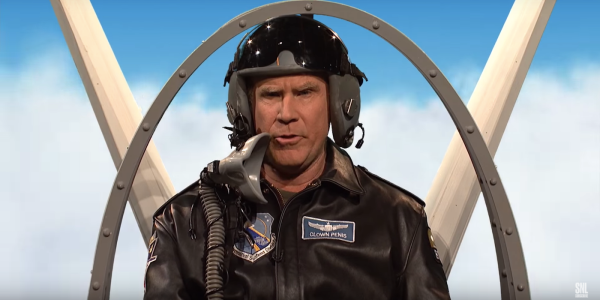 Despite what you may have seen on television, it is extremely unlikely that a fighter pilot would have the callsign “Clown Penis.”

A recent Saturday Night Live Skit with actor Will Ferrell featured an F-16 pilot with the above-mentioned callsign. The pilot explained that he picked it because, “When an enemy sees me on his tail, I want him to feel the same way that you’d feel if a clown showed you his penis: Confused, unsettled, and most of all very, very scared.”

To those not familiar with aviation, this may seem to be a plausible scenario, especially since two Navy aviators got into trouble last year for drawing a penis in the sky. But experts will tell you that pilots typically don’t pick their own callsigns.

In fact, Air Force squadrons vote on a pilot’s callsign and the most popular ones get assigned to the pilots, said retired Air Force Lt. Col. Daren Sorenson, a former F-15 pilot. Callsigns are meant to represent something significant that a pilot did during their initial time in the squadron.

“The goal is to come up with a name that fits the individual pilot’s character as well as capturing some possibly embarrassing that happened when he was new,” Sorenson told Task & Purpose. “It’s not meant to be taken too seriously, and most have a great deal of fun telling others what their callsign means and the story behind it.”

Callsigns are typically puns on pilots’ last names or they commemorate a pilot’s major accomplishment or failure, Sholtis told Task & Purpose on Monday. Pilots can keep their callsign from a previous squadron if they flew combat missions with that name.

“The name cannot be too cool for the pilot in question, which is why you don't see a lot of ‘Top Gun’-style callsigns across the force,” he said. “Finally, the name usually isn't one you ask for yourself or one that is too difficult to explain to anyone who asks — which would seem to exclude the callsign used in the skit.”

In the Navy, pilots and flight officers generally receive their callsign from their first operational squadron or during flight training as a member of the fleet replacement squadron, said Cmdr. Ron Flanders, a spokesman for Naval Air Forces.

As in the Air Force, callsigns can be riffs on the aviator’s name, said Flanders, who does not fly but still earned the callsign “Ned” from aviators.

“We had a pilot charged with briefing his squadron prior to a major exercise,” Flanders explained. “He was so nervous, he fainted, earning the callsign ‘Flopper,’ a Navy term, which usually describes an un-briefed personal casualty drill conducted during training — usually a sailor will feign unconsciousness, etc.

“Another example is a pilot who was known as ‘Boom Boom;’ it was given to him because during carrier qualifications training, he forgot to release the parking brake prior to a catapult shot off the ship. As a result, both of his main mounts blew during the catapult shot, with a loud ‘BOOM BOOM’ noise.”

So for anyone thinking about becoming a pilot so he can have the callsign “Clown Penis,” there’s always the North Korean air force.