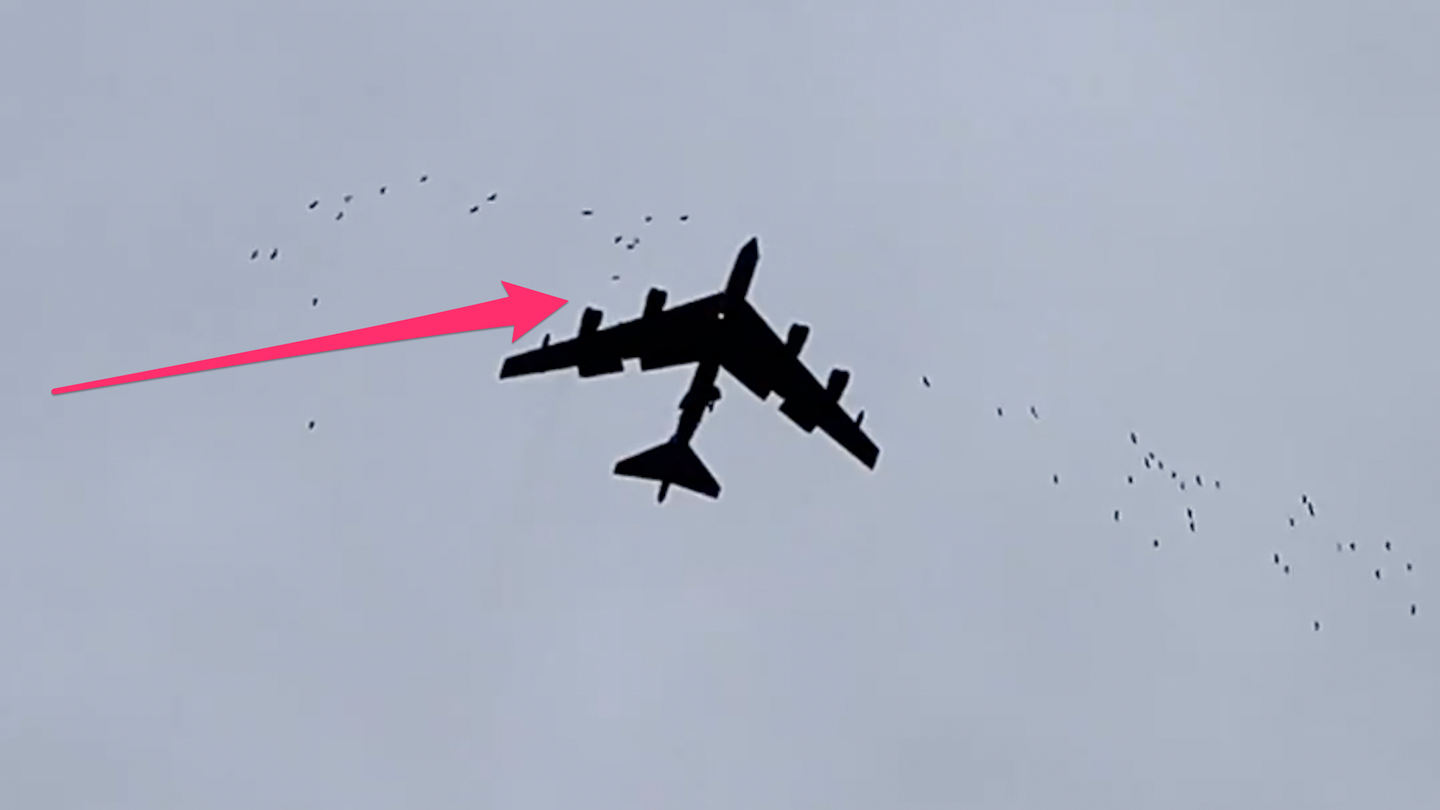 If you ever want to see a scary moment for Air Force pilots, look no further than a recent video posted to social media which appears to show an Air Force B-52 Stratofortress bomber flying through a flock of birds.

The video was posted to Facebook on November 3, the same day a B-52 crew assigned to Minot Air Force Base, North Dakota reported a bird strike, although Air Force officials could not confirm the video documented the same incident.

“I cannot confirm the relationship or origin of this video,” Air Force spokesperson Justin Oakes told Air Force Times, which first reported the incident, on Wednesday. “There was a similar instance at Minot.”

Fortunately, nobody was injured, though the Air Force has started an investigation into how badly the jet may have been damaged in the incident.

“That bird strike is currently undergoing the normal safety investigation process to determine what type of bird, evaluate the damage caused to the aircraft, and see if there is anything that can be learned to prevent future mishaps of this nature,” Oakes told Air Force Times.

The video, which was posted by Facebook user Andrew Tancabel, features a narrator expressing their surprise at witnessing the collision.

Dark smoke briefly trails from the jet’s engines, which sound as if they go up an octave for a moment, although black smoke is not an uncommon emission from a B-52’s engines.

It was fortunate for the crew that the situation did not turn out worse. Bird strikes have killed many aviators and downed many aircraft over the years, including a 2016 B-52 crash at Andersen Air Force Base, Guam, which saw the crew walk away with only minor injuries but destroyed the $112 million aircraft.

Hopefully, the B-52 at Minot will live to fight another day, but the incident shows how birds are still one of the most dangerous aspects of flight. In fact, the feathered friends can be so damaging to military aviation that Air Force engineers have integrated them into the aircraft design process for decades.

Starting in the 1970s, Arnold Air Force Base, Tennessee operated a ‘chicken gun,’ which launched whole chicken carcasses at more than 700 miles per hour into glass canopies, windshields, and other components of F-16s, A-10s, C-130s, and other aircraft to test how well they could survive a bird impact in the sky.

“The best thing to use to simulate a bird strike is a bird,” Randall Watt, then-project manager for the Arnold Bird Impact Test Facility, said in 1996 “And chickens are the easiest to come by.”

Bird strikes against an aircraft’s glass canopy or windscreens can kill or injure aircrew from impact, debris, or cabin decompression. Force is calculated by mass and acceleration, so even a small bird can cause catastrophic damage at the breakneck speeds of a jet aircraft. Though the facility at Arnold has since shut down, chicken guns are still in use launching dead birds and also drones at aircraft components.

Aircraft engines are particularly vulnerable to bird strikes though, “like throwing a rock into an engine,” as one airman described it in 2009. That is part of the reason why the Air Force tries to prevent bird strikes where they are most likely to occur: around the airfield on takeoff or landing. These efforts include keeping the grass between seven and 14 inches long to deter nesting, moving large bushes or trees and patrolling the area to find problem areas or relocate overly-curious wildlife, and even using noise makers and air cannons that are supposed to compel birds to clear the flight line.

Chances are, the bird strike that happened against the B-52 at Minot earlier this month was not its first, since even the youngest B-52 is about 60 years old at this point. Hopefully there will not be many more, since the Air Force expects the old workhorse to keep flying for decades into the future. The B-52’s nickname is BUFF, after all, so fingers crossed this latest bird strike buffs out too.