"One is gentle and graceful, and the other is a full-send yeet." 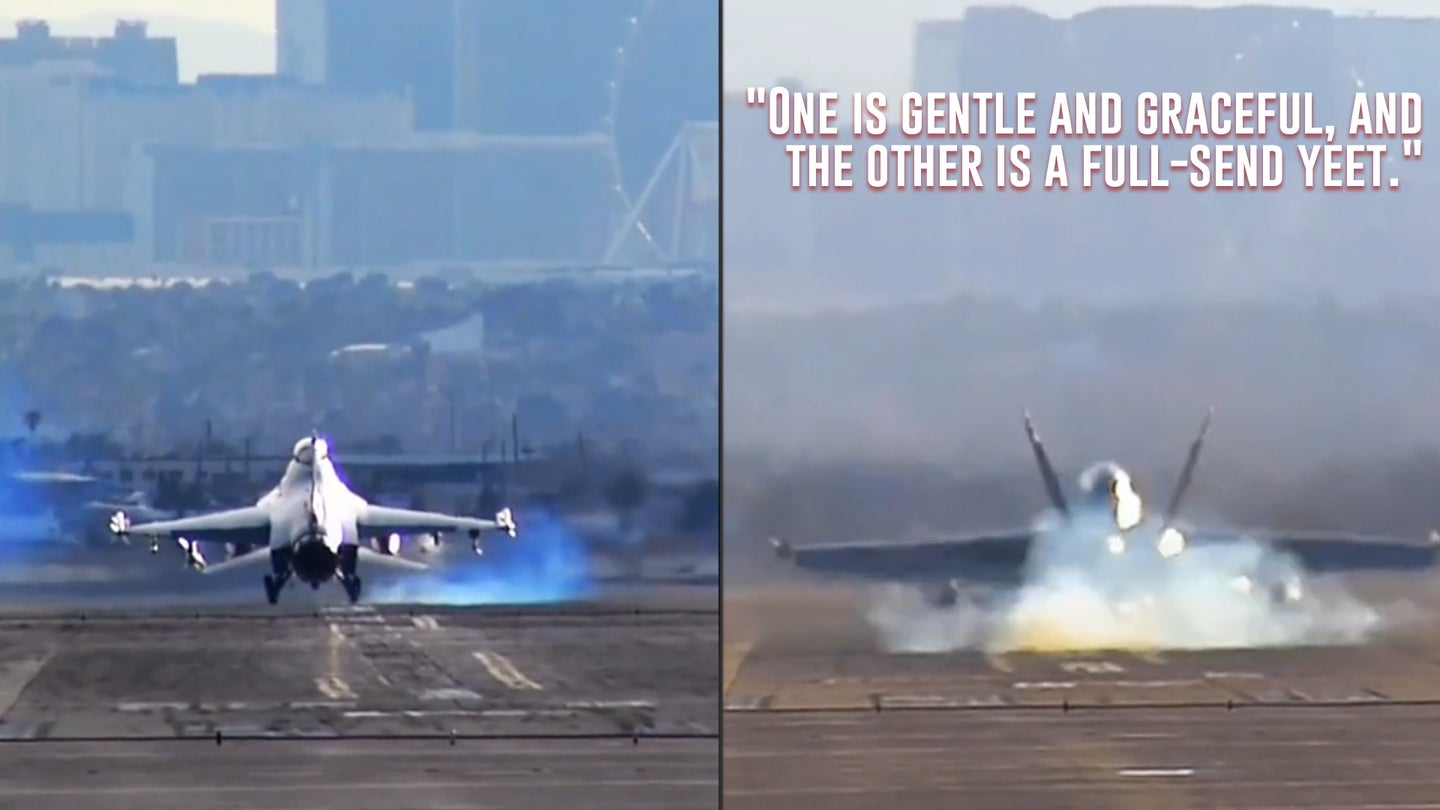 If you’re an ignorant civilian like me, aircraft landings may look the same across the board. But you can actually tell a lot about an aircraft, and about the pilot behind the stick, just by the way it hits the runway.

That was on full display on the Air Force subreddit on Monday, where a user posted a TikTok video of an F-16 fighter jet landing at Nellis Air Force Base, Nevada, followed soon after by an E/A-18G Growler electronic warfare aircraft. Though it’s unclear which unit the aircraft belongs to, there’s a big difference between how the two hit the ground and it has a lot to do with how Air Force and Navy pilots are trained.

First up, the F-16, which takes its time going down the runway before gradually setting down on its landing gear. After 10 seconds and a whole lot of concrete, the Viper, as F-16s are called, still has not set down its nose gear as the jet shrinks into the middle distance.

Then comes the Growler. Like a brick falling out of the sky, the larger jet gets all wheels down immediately after hitting the deck. You can practically feel a whoomph as the jet sends up a cloud of dust and smoke and immediately begins to slow down into taxi speed. Commenters on Reddit took notice.

“Alternatively: Navy: I walked away, plane is reusable; nailed it,” wrote another.

What explains the difference between the two landing styles, and why would the Navy bring its fighters down like a stack of bricks? Task & Purpose reached out to Brendan Stickles, a former Navy Growler pilot, and he explained why the two landings look so different.

Unlike Air Force pilots, Stickles said, Navy pilots train to land on aircraft carriers, whose runways are only about 300 feet long. By contrast, runways on land often have 7,000 or more feet to work with, nearly 23 times the length of a carrier runway.

A Growler weighs 33,000 pounds empty and is often traveling 150 miles per hour when it hits the flight deck. To bring such a large, fast-moving aircraft to a stop, the jet has a hook protruding out the back called a tailhook. The tailhook is made for grabbing one of three or four cables strung across the width of the flight deck. Called arresting gear, these cables make up for the short length of the runway and let naval aircraft come to a complete and extremely fast stop.

The thing is, it’s not a guarantee the aircraft will grab one of the cables. That means the pilot has to keep the plane moving fast if he or she misses and needs to take off again at the other end of the runway. That’s right, instead of hitting the brakes like you might expect a pilot to do when trying to land on a very short runway, Navy pilots actually hit the gas really hard in case they miss the arresting gear. Of course, this all means that when the jet does land and catch the arresting gear, it essentially slams into the deck, as shown by the TikTok video.

“Navy pilots train to land on a carrier — which requires holding a consistent “VSI” [vertical speed indicator] of 650 feet per minute,” Stickles explained. “That is why the landing gear is so much more substantial on Navy jets. If you landed that hard in an Air Force jet you could do damage to the airframe. So most carrier aviators land like they are at the boat even when they are on a long runway.”

“The Navy has no pavement to spare and lands accordingly,” said the pilot, who spoke on the condition of anonymity because he is still in the service and was not authorized to speak with the press.

“The Navy designs their airplanes for harder landings,” the pilot added. “Beefy landing gear. That’s one of the big differences between the Air Force F-35 and the Navy variant; more robust landing gear.”

One Reddit commenter put it in even simpler language: “’You wanna slam that bitch down and get’er hooked, otha’whise you gon fine [sic] out how cold the water is in the South China Sea,’” they said, attributing the adage to an “old drunk Navy pilot I met at a bar once.”

It should be pointed out that the blurry video makes it difficult to tell which country’s military the TikTok aircraft belongs to. Stickles pointed out that only the U.S. Navy and the Royal Australian Air Force fly the Growler, and since the RAAF does not often train at Nellis, it is likely a U.S. Navy aircraft in the video, he said. The F-16 is more difficult to identify, since it is flown by more than two dozen countries around the world. Still, there are no F-16s that land on aircraft carriers (despite the Navy’s best efforts), so the long-runway landing technique is probably similar across most militaries.

Nationalities aside, the TikTok shows more than just a difference in landing styles. It also shows just how highly-trained military pilots are to execute those different styles. For example, it would be obvious to anyone flying over the desert of southern Nevada that the 10,000-foot runways at Nellis are not the same as a 300-foot carrier runway pitching in a storm-tossed ocean. Even so, the Navy pilot’s training kicked in and he or she brought the jet down like it was back at sea. In fact, many Navy pilots keep landing that way even after they have left the military.

“Whenever they leave the Navy and become an airline pilot, you’ll feel that landing in the back of a Jet Blue flight,” Stickles said. “Every time I fly commercial and there is a hard landing I yell ‘Go Navy!’ More than once someone around me has laughed out loud and given me a high-five.”

The Air Force pilot should also get some credit: anyone watching the TikTok can see how lightly the F-16 touches down on the runway, like Michelangelo with a 20,000-pound paintbrush.

As always, a commenter on Reddit put it best. “One is gentle and graceful,” they wrote, “and the other is a full-send yeet.”