"I was determined that I would not take no for an answer, and pushed hard to show that I could do the job.” 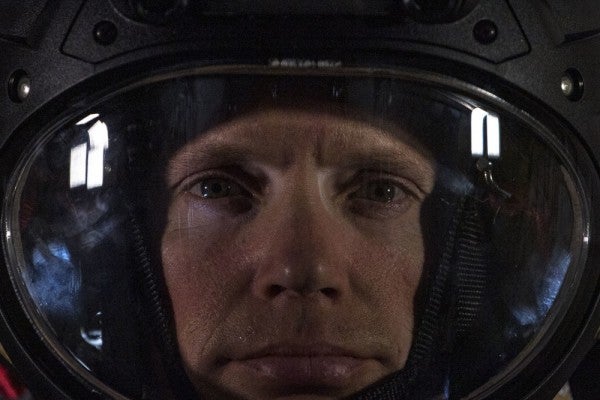 Ever think a person with Tourette syndrome could become an Air Force explosive ordnance technician? If you answered no, you haven’t met Lt. Col. Kelly Hannum, whose favorite job in the Air Force involves situations where one wrong move can mean instant death.

“I loved EOD and the opportunity of being around amazing, like minded people that loved solving problems,” Hannum said in a profile of him written by Staff Sgt. Greg Nash on Monday. “There’s a thrill of figuring out how to safeguard and remove hazards from dangerous areas. Whether by blowing up threats or securing them to move out of harm’s way, finding out the right way to save lives and protect assets was a rewarding adrenaline rush.”

Still the journey hasn't been easy. As explained in the Nash profile and by the Tourette Association of America, people with TS have to battle a widely-held stereotype that they'll have an uncontrollable swearing outburst. In reality, only 10 percent of people with TS have such outbursts, known as coprolalia, the association wrote. Instead, people with TS can have a range of vocal or motor tics. For instance, Hannum started noticing his “tics, twitches and squeaks,” when he was in the third grade, according to a 2013 profile of him.

Nonetheless, those widespread misconceptions about the disorder mean that people living with it can have a hard time fitting in.

“There were some people who made fun of me back in college, but I was lucky enough to have real friends who were there to defend me,” Hannum said. “As time passed by, I learned to treat it with humor when people treated me differently.”

When it comes to military service, TS can also be an immediate dealbreaker.

“If military recruiters do their job as directed, no one who has ever taken a psychiatric medication (including most of the drugs used to suppress tics) or who has ever been diagnosed with a neurodevelopmental condition will be admitted,” wrote the Tourette Association of America on its page about military service.

As demonstrated by Hannum, recruiters often take a case-by-case approach to individuals with TS. However, symptoms of the disorder tend to be exacerbated by stress, according to the association, and in 2004 one National Guardsman had to be sent home from Iraq because stress had “severely exacerbated his tics.”

But again, as demonstrated by Hannum, the effect of stress on TS symptoms is different for each individual. As an EOD officer, Hannum has thrived in what is arguably the most stressful job in the military.

“Tourette syndrome is just a part of me, it doesn’t define me,” he said. “I’m a proud father, husband, military officer, engineer and EOD member – those are the biggest parts of my life that I embrace and want to be defined by.”

Hannum has a passion for building things and solving problems, which, according to the 2020 profile, was fueled by his father’s firewood business and by the improvisational skills of MacGyver in the eponymous 1980s TV show.

Hannum carried this passion with him into the Air Force. After being cleared by a neurologist, he was commissioned as a second lieutenant on August 13, 1999, and since then he has worked in a variety of jobs including civil engineer, instructor and EOD tech.

“Throughout my Air Force career, there were times where I was worried military medical bureaucracy would prevent me from doing the things I wanted to do,” he said in a 2019 blog post for the Tourette Association of America. “I was determined that I would not take no for an answer, and pushed hard to show that I could do the job.”

Hannum pushed really hard: according to his blog, his achievements include graduating from EOD school at the top of his class, commanding an EOD flight, deploying four times, earning a Bronze Star and commanding a squadron at the Air Force Survival School. The lieutenant colonel is now deputy commander of the Osan, South Korea-based 51st Mission Support Group, an organization of 2,800 airmen who provide engineering, security, logistics, communications, personnel and administrative support to the 51st Fighter Wing.

On top of all his other duties, Hannum feels a responsibility to raise awareness about Tourette syndrome.

“Tourette Syndrome isn’t something I can easily hide, so I decided my best strategy was to be open about it,” said Hannum, in the 2020 profile. “By being open and explaining to people ahead of time what they might see, they are more likely to ask me questions rather than try to speculate about my condition.”

There are not many people with TS in the Air Force, the 2020 profile said, but Hannum encouraged hopefuls to apply. In fact, when Hannum was still an instructor at the Air Force Civil Engineer School, one of his students came up to him during a break and asked if he really had TS.

“I said that I did, and he confided that he did as well,” Hannum wrote in his 2019 blog. “He has done very well for himself in the years since … I am sure he is just as determined as I am to prove what he can do!”