Hugh Hefner’s Playboy Was The Magazine Of The Vietnam War

In late 1965, Lt. Jack Price of the 173rd Airborne’s 503rd Infantry Regiment bought his company a lifetime subscription to... 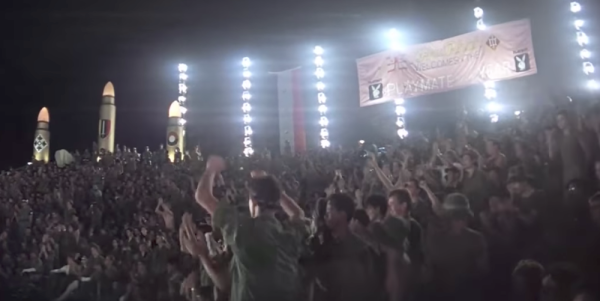 In late 1965, Lt. Jack Price of the 173rd Airborne’s 503rd Infantry Regiment bought his company a lifetime subscription to Playboy. The magazine had just launched a crazy promotional offer: The first issue of the subscription would be delivered in person by a Playboy playmate. Price was deployed in Vietnam.

By the time Playmate of the Year Jo Collins arrived in Saigon, Price was lying in a hospital bed at Bien Hoa airbase recovering from a gunshot wound. Collins flew in on a Huey to hand him the first issue of his subscription. The rest of Price’s company — nicknamed “Bloody Bravo” because of the exorbitant number of casualties it had sustained — was still in the field, locked in a fierce battle with a Vietcong regiment that lasted 10 days.

According to the Richmond-Times Dispatch, Collins was waiting for the soldiers of Bloody Bravo on the edge of the landing zone when their choppers touched down. Playboy called it a “hazardous goodwill mission.”

Playboy founder and American icon Hugh Hefner died on Sept. 27 at the age of 91. An Army veteran who had served as an infantry clerk during World War II, Hefner remained a champion of the troops over the course of his long life, and through Playboy his deep appreciation of those who serve influenced the way generations of Americans perceive the military.

Playboy was the magazine of the Vietnam War. And it wasn’t just the photographs of nude women — distinguished by their all-American “girl next door” sex appeal compared to the high-fashion models featured in other magazines at the time— that made voracious readers of American G.I.s. Beyond the centerfold, the magazine tackled the controversial issues of the ’60s and early ’70s through hard-hitting feature articles, some of which were deeply critical of the war and the people running it.

However, as historian Amber Batura recently noted in The New York Times, Playboy made it a point to always celebrate the men on the ground, encouraging readers to support the troops even if they didn’t support the war. “We admired their bravery and their idealism, their courage and dedication in the face of endless problems,” journalist David Halberstam wrote in Playboy in 1971. “We believed that they represented the best of American society.”

The magazine’s reader-response section also provided a forum for deployed troops to express their own opinions about the conflict, its justifications, and the impact of drugs, race, and homosexuality in the military. Meanwhile, the column gave Americans back home a rare window into what soldiers were actually experiencing in Vietnam, where the company’s bunny logo was plastered all over military bases, vehicles, and aircraft.

“Adopting the symbol of Playboy was a small rebellion to the conformity of military life,” Batura wrote, “and a testament to the impact of the magazine on soldiers’ lives and morale.”

In 1991, during the first Gulf War, Playboy launched what it dubbed “Operation Playmate.” Deployed service members who wrote letters to playmates would receive autographed letters from the playmates in return. Gen. Norman Schwarzkopf called it “a major morale boost for our troops.” The operation was revived in 2001 for troops participating in the invasion of Afghanistan, and again as the march to Baghdad was getting underway.

“The boys will be able to send an email to their favorite Playmate and she’ll send them a headshot of themselves or of them wearing shirts and T-shirts,” Playboy spokesman Bill Farley told the Associated Foreign Press in April 2003. “Hef has said we’ll keep this latest effort going as long as their is a call for it.”

He added: “I don’t know his views on this conflict, but when it comes to the troops, he feels that we should support them 100 percent.”