A member of a Marine Corps unit trained to use the Navajo language to transmit messages during World War II... 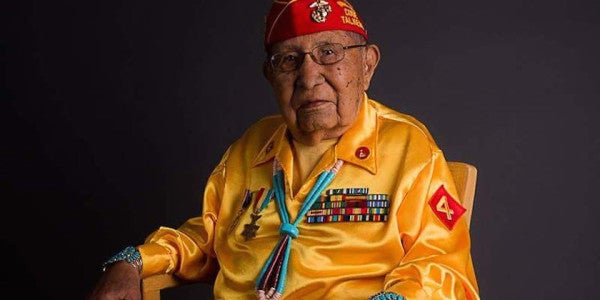 A member of a Marine Corps unit trained to use the Navajo language to transmit messages during World War II has died.

Navajo Code Talker David E. Patterson Sr., 94, died Sunday in Rio Rancho, New Mexico, according to a press release from the Navajo Nation Office of the President and Vice President.

Patterson died of pneumonia and complications from a subdural hematoma, his son, Pat Patterson, wrote in an email to The Daily Times.

“Those who were close to him knew he was a devoted Catholic. He loved bingo, baseball – Los Angeles Dodgers – and was an avid bowler, a passion in which he enjoyed doing until the very end,” his son wrote.

Pat Patterson said in a telephone interview today his father moved to his Rio Rancho residence in 2012 after living for decades in Shiprock.

He added his father participated in regional and Las Vegas bowling tournaments and remained active in the sport until May.

“I tell people I blame him for my bowling addiction,” Pat Patterson said with a chuckle then added he gave his father a bowling ball designed with the Navajo Code Talkers Association emblem.

Pat Patterson said his father did not talk much about his military service, and the last time he talked publicly was to elementary students in 2012.

“He wanted to fight for our county and it was his duty to do so,” Pat Patterson said.

David E. Patterson enlisted in the Marines in 1943 and served in the Marshall Islands, the islets of Roi and Namur, the Kwajalein Atoll, Iwo Jima and Saipan.

He was honorably discharged in April 1945 and was the recipient of the Congressional Silver Medal in November 2001.

In 1948, he married Marion Patterson. Together they raised seven children in Oklahoma, California and Shiprock.

He went to college in Oklahoma and in New Mexico to become a social worker. He worked at the tribe's Division of Social Services from 1975 until retiring in 1987.

He also coached Little League Baseball and Softball in Shiprock.

After retirement, he volunteered as a foster grandparent to schools in Shiprock until 2012.

“I think he was wanting to keep busy,” Pat Patterson said about his father's involvement with the foster grandparent program.

Leaders from the Navajo Nation expressed their condolences in statements from their offices.

“Beyond his service in protecting our freedom, he was a beloved husband, father and grandfather. The Office of the President and Vice President extends our condolences to his family during this time of mourning,” Navajo Nation President Russell Begaye said.

Speaker LoRenzo Bates called Patterson “a great example” for the tribe though his military service.

“We will miss his presence and service in our communities where he helped many of our Navajo people,” Bates said.

A funeral service will be at 11 a.m. Thursday at Christ the King Catholic Church in Shiprock. Interment to follow at the Shiprock Community Cemetery in Shiprock.