As leaders from seven of the world’s most powerful nations meet in Europe this week for the G7 summit, Russian... 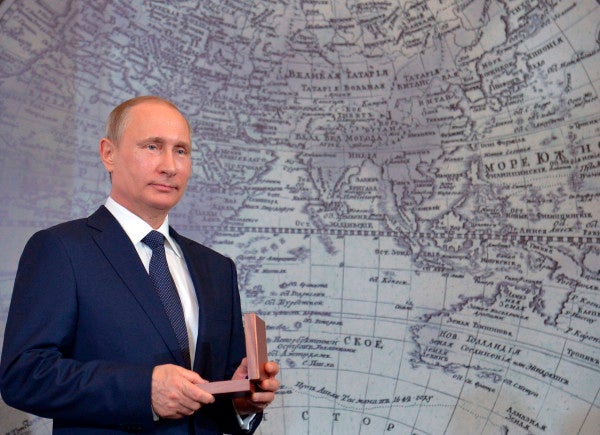 As leaders from seven of the world’s most powerful nations meet in Europe this week for the G7 summit, Russian president Vladimir Putin, the man the leaders are largely meeting to discuss, is doing his best to put his own spin on things, condemning the U.S. military and NATO in the process.

The summit used to be known as the G8 summit, but Russia lost its invitation after recent bellicose and unprincipled acts; namely, the annexation of the Crimean peninsula in Ukraine.

From his perch on the outside looking in, Putin has been hard at work justifying his diplomatic and military efforts, which has involved arguing that Russia is really not a threat to NATO and condemning the U.S. military.

In a June 8 interview with the Italian newspaper Corriere della Sera, Putin outlines what he sees as the difference between the Russian and American militaries.

“I invite you to publish the world map in your newspaper and to mark all the U.S. military bases on it. You will see the difference,” Putin said.

The Russian president was responding to a question on efforts by NATO to “restrain the Russian bear.” Putin was trying to claim here that there is no Russian bear, that Russia holds no expansionist or aggressive interests, but is rather solely interested in national defense, unlike the United States.

The global presence of the U.S. military is undeniable, but Putin spinning visions of a Russian sheep next to an American lion don’t stand up to scrutiny.

Even if we set aside this pesky problem of Crimea, where Russia recently invaded and seized control of a mass of sovereign land that belonged to Ukraine, Russia’s military presence is far from isolationist.

In the interview, Putin spends the moments immediately preceding the quote spinning the presence of Russian military bases on foreign soil as something different.

He cites two Russian bases in other countries — one in Tajikistan, which he calls “remnants of our armed forces (since Soviet times),” and one in Kyrgyzstan — and says that they are in place only to address the threat of terrorism from nearby Afghanistan.

A Russian military base in Armenia, he claims, has a stabilizing role in the region, an argument that could also be used to defend American military bases in regions like Japan, South Korea, and Kuwait.

Other than those three, Putin claims, “Russia has virtually no bases abroad.”

An interactive graphic published recently by Al Jazeera America paints a different picture. The graphic identifies no fewer than 19 specific Russian military installations, including the Sevastopol Navy Base in Ukraine, from which Putin launched his 2014 annexation of Crimea.