A Dutch F-16 fighter shot itself with its own cannon

During a training exercise involving two F-16's over the island of Vlieland on Jan. 21, one pilot opened fire with the Vulcan cannon and found "at least one fired cartridge caused damage" to the plane's exterior and engine. 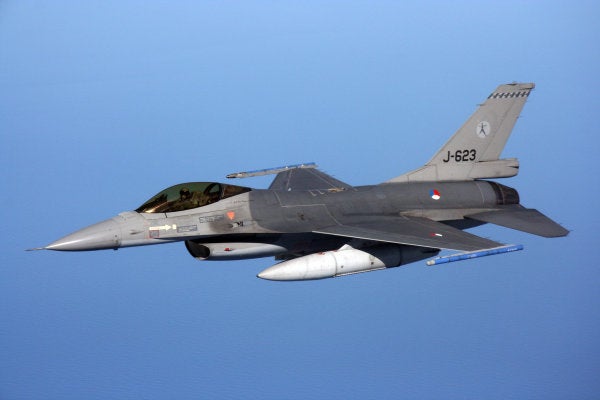 A Royal Netherlands F-16 Fighting Falcon scored a direct hit on itself in January, according to Dutch state broadcaster NOS.

During a training exercise involving two F-16's over the island of Vlieland on Jan. 21, one pilot opened fire with the Vulcan cannon and found “at least one fired cartridge caused damage” to the plane's exterior and engine, NOS wrote.

There were no injuries during the extremely uncommon mishap, which The Defence Blog chalked up as the F-16 apparently flying right into its own stream of cannon rounds. The pilot followed emergency protocol and landed at nearby Leeuwarden Air Base.

“This is a serious incident. We therefore want to fully investigate what happened and how we would be able to avoid this in future,” Dutch Inspector-general Wim Bagerbos told reporters.

Interestingly, this isn't a first.

As J.D. Simkins points out at Military Times, a Grumman test pilot pulled off a similar feat in an F11F Tiger back in 1956, when he started to dive from an altitude of 20,000 feet to 7,000 feet while firing his 20mm cannon. At one point he thought he was hit by a bird strike, but he actually ran into his own bullets and the engine began to fail.

“When the pilot pulled up out of his dive the rounds he fired, their trajectory having decayed in the interim, intersected with his aircraft,” Bill Walton wrote of the incident for AV Geekery. “The pilot survived; the Tiger did not.”

Speaking of bizarre incidents involving F-16's and the trusty Vulcan cannon: Lest we forget the maintenance worker last year who apparently opened fire with one F-16's cannon across the flight line, which destroyed one F-16 and damaged another that was nearby.

SEE ALSO: Here's what it looks like when an F-16 makes a highway patrol officer's radar go apesh*t