He Accidentally Shot Himself In The Head. Now This Soldier Is Fighting To Be Medically Retired

"Although it was a reckless, stupid act, he had no thought there was actually a bullet in the gun when he fired it." 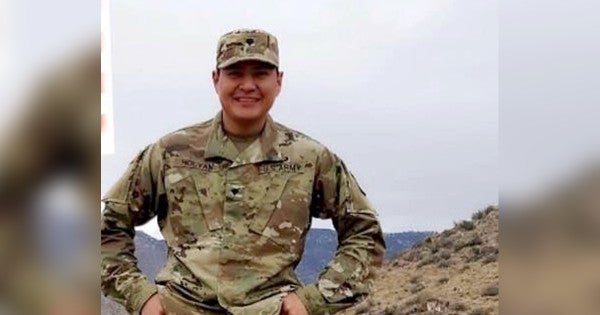 Army Spc. Kevin Holyan is fighting the Army for disability benefits after accidentally shooting himself in the head with his personal weapon nearly two years ago, according to his attorneys.

In April 2017, the Fort Campbell soldier was showing off his personal weapon during a fellow service member's promotion party when he made a joke about killing himself, put the gun against his head, and pulled the trigger, a news release from the Tully Rinckey law firm in Washington, D.C. says.

The weapon was not loaded at the beginning of the party, according to the news release, which also says Hoylan and the others had been drinking “but not in excess.”

The commanding general for the 101st Airborne Division has determined that Hoylan was not injured in the line of duty “due to willful misconduct,” said his attorney Sean Timmons, of Tully Rinckey, who is preparing to file an appeal with the secretary of the Army.

Hoylan's appeal will determine whether or not he is medically retired from the Army, Timmons told Task & Purpose. If Hoylan is discharged, he would have to seek medical benefits from the Department of Veterans Affairs.

Timmons described Hoylan as a young and relatively inexperienced junior enlisted soldier who “fell victim to peer pressure” to do something stupid when he accidentally shot himself in the head. There is no evidence that Hoylan was to avoid service by becoming permanently disabled.

“The regulation is very clear that absent willful misconduct in the commission of a crime or deliberate intent to harm someone, it's line of duty,” Timmons said. “Here, in this case, my client did not intentionally mean to harm himself. Although it was a reckless, stupid act, he had no thought there was actually a bullet in the gun when he fired it. Because of his lack of knowledge, by default the rule is line of duty.”

As a result of his injuries, Hoylan is paralyzed and he suffered brain damage, Timmons said. Ultimately, either Army Secretary Mark Esper will decide Hoylan's appeal, which is due on Feb. 28.

When asked about Hoylan, a spokesman for Fort Campbell, Kentucky had little to say, in part because Hoylan is no longer assigned there.

“Because the Army is still reviewing his case, it would be inappropriate for me to comment because the case is no longer with us,” said Lt. Col. Martin O'Donnell. “It is with the Army.”

Whatever the Army decides regarding whether an injury was incurred in the line of duty, the VA conducts its own medical evaluation to determine if a veteran's injuries are service connected, said Anthony Kuhn, chairman of Tully Rinckey's Military Law Practice Group.

SEE ALSO: Technician Accidentally Fires Vulcan Cannon And Destroys An F-16 On The Ground In Belgium