A maintenance worker accidentally fired a 20mm Vulcan cannon from an F-16 jet he was working on at Belgium's Florennes... 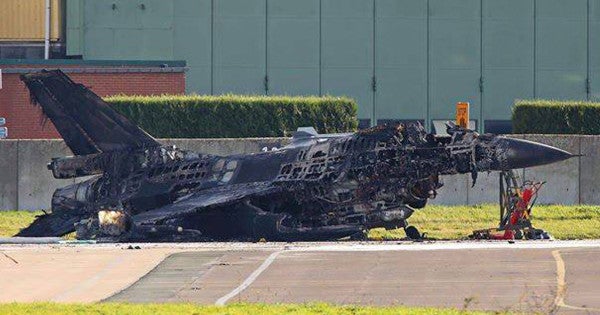 A maintenance worker accidentally fired a 20mm Vulcan cannon from an F-16 jet he was working on at Belgium's Florennes Air Force Base earlier this week, destroying another F-16 while damaging another aircraft nearby, according to multiple media reports.

A worker apparently opened fire across the flight line while performing maintenance on Oct. 11, according to Avio News. The F-16 that was racked by cannon fire quickly caught fire and exploded, since it was loaded with fuel and being readied for an afternoon sortie, according to Scramble Magazine.

“You can’t help thinking of what a disaster this could have been,” Col. Didier Polome, the base commander, told a Belgian television news station.

The Belgian Air Force confirmed a fire broke out on the base during maintenance work, causing one plane to burn while causing collateral damage in a second, without mentioning cannon fire as being the cause.

Belgium's Ministry of Defense said in a statement that two technicians suffered hearing injuries and were treated on the spot, while adding that an investigation into the incident had been launched.

The Belgian Air Force did not respond to a request for comment from Task & Purpose.

Here are photos from the incident, courtesy of Scramble Magazine: