Marines With Silent Drill Platoon Under Investigation For Hazing

The Marine Corps is investigating claims of hazing involving members of the Silent Drill Platoon, Corps officials announced on Tuesday.... 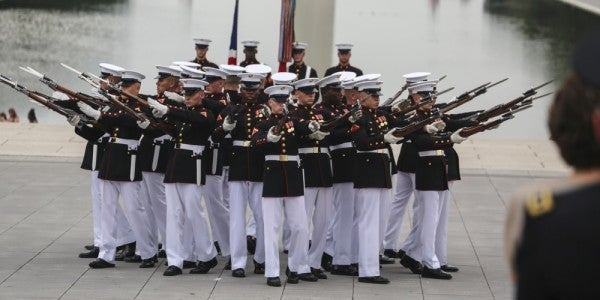 The Marine Corps is investigating claims of hazing involving members of the Silent Drill Platoon, Corps officials announced on Tuesday.

On Nov. 2, five Marines were placed in pretrial confinement, one of whom has since returned to Marine Corps Barracks Washington, D.C., a Corps official told Task & Purpose on Tuesday. The other four Marines have review hearings slated for this week. Military.com first reported the number of Marines involved.

No details about what the Silent Drill Platoon members are alleged to have done were immediately available on Tuesday.

Marine Barracks Washington takes any and all claims of hazing seriously and immediately began an internal command investigation into the allegations before turning that investigation over to NCIS.

Our Marine Corps values and sense of integrity are the foundation of our Corps and we expect our Marines to uphold the highest standards of conduct. The Marines at the Barracks take pride in their daily duties and their reputation in the community, which was demonstrated in September when Marines helped first responders rescue and provide aid for our neighbors when an apartment complex caught fire.

The investigation remains open, therefore no additional information is available at this time.”

UPDATE: This story was updated at 6:03 P.M. on Nov. 6 to include the number of Marines allegedly involved with hazing.