"It came to my attention that there were multiple events that were happening. The commanders were aware of it. They were aware of the culture. So that's why I thought it was in the interests of the squadrons, the interests of the wing, and also the Air Force to bring in new commanders that can set the course right and lead these units in the future." 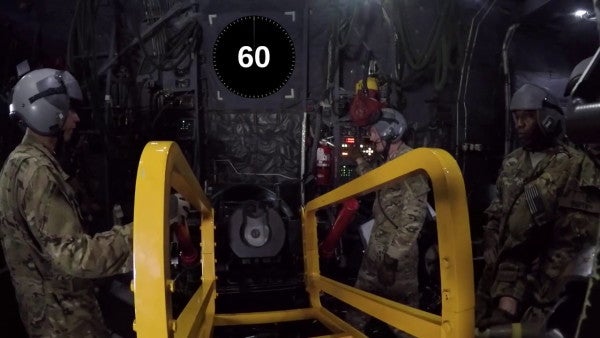 The Air Force has roughly 1,100 TACPs, who fight alongside conventional and special operations forces. They can call in airstrikes but they are also highly trained for ground combat.

“The tactical air control party is a weapons system in my command,” Bishop told Task & Purpose. “It is an elite team that has tremendous capability and tremendous potential to employ on the battlefield. I am very protective of that weapon system and I am very passionate making sure that it's able to be as lethal as possible when the time comes. A hazing culture that could arise is a threat to mission effectiveness.”

That's why Bishop has relieved two commanders: Lt. Col. Robb Fiechtner of the 3rd Air Support Operations Squadron and Lt. Col. Joshua Cates of the 5th Air Support Operations Squadron, after two command-directed investigations found the TACP airmen in their units were taking part in a ritual called “rolling up” that involved binding airmen with duct tape, tackling them, and having them struggle.

Col. Kenneth Boillot, commander the 1st Air Support Operations Group, ordered the first investigation after seeing indications in November that hazing might be taking place in one of the squadrons, Bishop said. When investigators determined the problem was not isolated to one unit, Bishop ordered the second investigation.

Bishop declined to discuss specifics of the two investigations, such as how many incidents of hazing were uncovered and why the two commanders did not stop their airmen from taking part in the rituals.

“It is a culture that allowed these incidents to happen,” Bishop said. “It came to my attention that there were multiple events that were happening. The commanders were aware of it. They were aware of the culture. So that's why I thought it was in the interests of the squadrons, the interests of the wing, and also the Air Force to bring in new commanders that can set the course right and lead these units in the future.”

One reason why airmen may tolerate hazing is they feel the need to be part of an elite team, so their desire to be accepted by their peers can override any concerns they might have about taking part in rituals such as “rolling up,” Bishop said.

But hazing does not build esprit de corps or teamwork among airmen, he said. “We look at our TACPs as elite athletes,” Bishop said.

“The 354th Fighter Wing alone has invested millions of dollars into our airman performance optimization effort, where we can provide them the resources, the physical training, the mental training in order to be lethal on the battlefield. Hazing practices put all those resources at risk.”

Bishop would not say if the two fired squadron commanders offered an explanation for why they allowed hazing to go on, but he said their mistakes were not the result of malice.

“First and foremost, Lt. Col. Fiechtner and Lt. Col. Cates are honorable officers that have served their country well in their careers,” Bishop said. “We need to remember that in this situation. They are great Americans, great people, but they just made decisions that led to a culture that did not enhance the mission effectiveness of the units and then also created the environment where hazing was allowed.”

WATCH NEXT: The Legacy of AFSOC