A Marine public affairs official was arrested at Camp Lejeune on Friday on a warrant out of his native Florida, officials confirmed 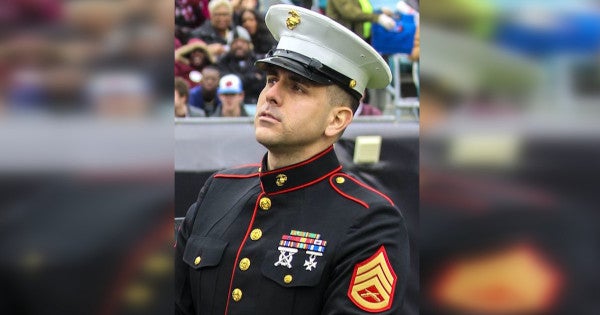 A Marine public affairs official was arrested at Camp Lejeune, North Carolina on Friday on a warrant out of his native Florida, officials confirmed.

Staff Sgt. Bruno J. Bego, 31, is currently in the custody of the Onslow County Sheriff's Office on a single charge of being a fugitive from justice, Marine Corps spokesman Staff Sgt. Jennifer Poole told Task & Purpose.

While neither the Marine Corps nor the Onslow County Sheriff's Office could comment on the nature of Bego's offense, Florida news network First Coast News reports that his arrest appears to be in connection with the theft of a police cruiser in Jacksonville, Florida.

According to property records reviewed by First Coast News, Bego used to live at the same Florida address from which a Jacksonville Sheriff's Office police cruiser was stolen on Oct. 13.

Three people were arrested and charged with armed burglary and auto theft, among other firearm- and drug-related charges, local news station Action News Jax reported at the time.

When reached by First Coast News regarding Bego's potential connection to the stolen cruiser, a JSO spokesperson responded that he was “not going to talk about that.”

Bego entered the Marine Corps April 14, 2009 and deployed to overseas once to Afghanistan from December 2010 to September 2011.

A native of Broward Country, Florida, Bego was previously stationed at Camp Lejeune from 2010 to 2012 before a stint at a Recruiting Station Jacksonville, Florida from 2013 until 2019.

It's unclear if Bego's time at Recruiting Station Jacksonville overlapped with the alleged theft of the JSO police cruiser.