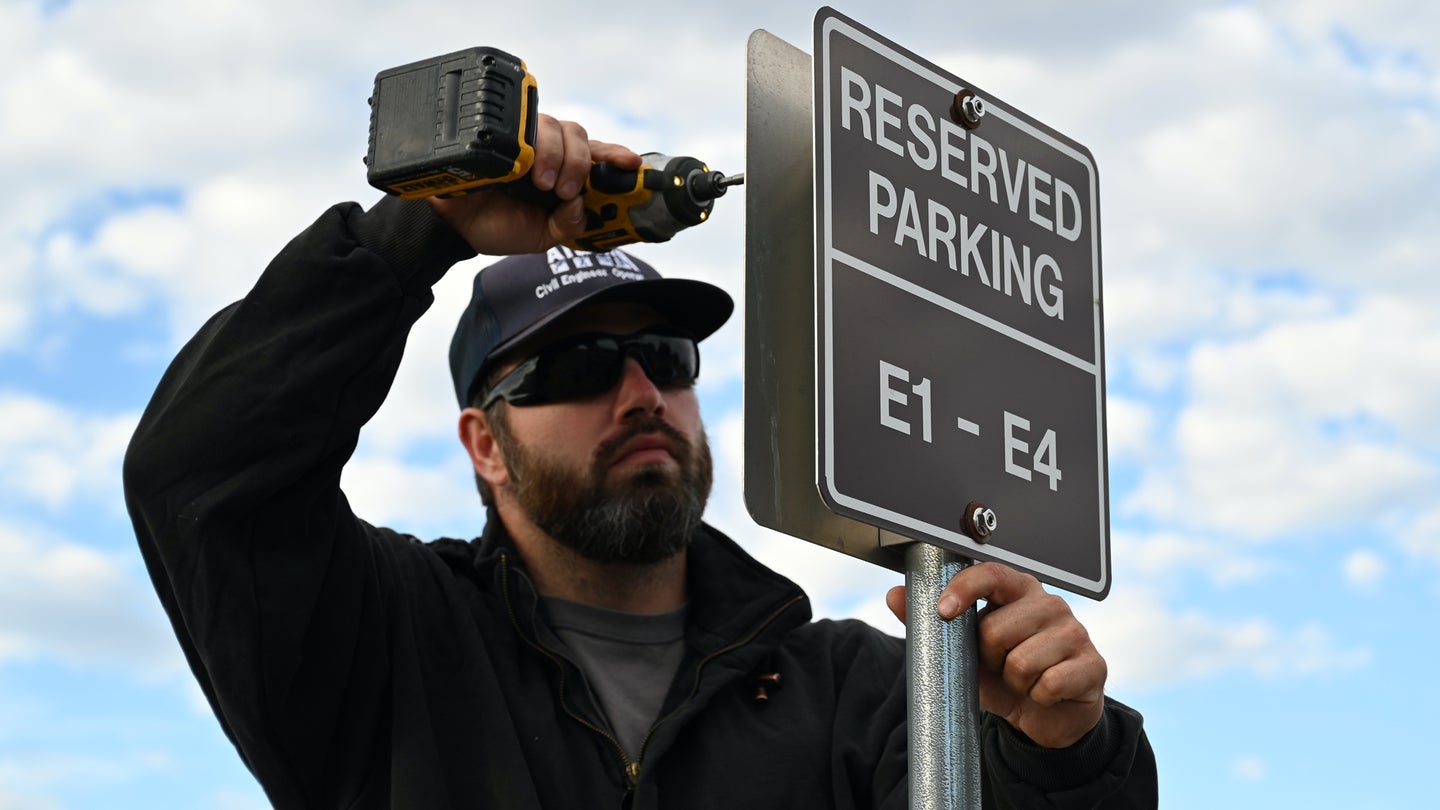 The Air Force has long been ragged on by soldiers, sailors and Marines for being soft, but that might not be a bad thing. After all, who wouldn’t want life to suck less? Just this year, the service announced it will be allowing airmen to walk on their physical training test, put their hands in their pockets while in uniform, and even (gasp) use a cell phone or drink water while walking in uniform.

Normally, base facilities like the commissary and exchange have reserved spots for senior leaders such as chief master sergeants, colonels and general officers, the base wrote. But these new spots are assigned to airmen basic through senior airmen, who represent E-1 to E-4 on the Department of Defense enlisted pay scale. It’s worth pointing out that unlike more senior airmen, junior enlisted personnel generally have to live on base in the barracks, so it’s likely that they’ll be frequenting base exchanges and other facilities more often.

The final signs marking out these spots will be installed in the coming weeks, and not a moment too soon, according to some reactions on social media.

“Every base we’ve been to, I’ve rarely seen those higher rank spots used,” wrote one commenter on Facebook. “They always sit empty.”

“The majority of high-ranking reserved exchange spaces just sit empty for weeks at a time,” wrote another on Reddit.

Still, other reactions were mixed. Junior enlisted service members are literally at the bottom of the totem pole in military land, so they rarely get the same perks as their superiors. But some commenters were suspicious. After all, the Tinker press release did not specify where in the parking lot the new reserved spots are located.

“At the back of the lot, farthest from the door to the BX,” wrote one commenter on Facebook.

“Plot twist: the parking spots are in another area of the base,” wrote another.

Others said the reserved parking situation at Tinker was getting out of hand. For example, the press release said there were also reserved spaces for honor guard, alert vehicles, pregnant mothers and Gold Star family members. Still, others called for more reserved parking spaces, such as for retirees or for E-5 airmen so there would still be incentive for E-4s to get promoted — though that was likely a joke.

“Why not just offer valet parking?” wrote one commenter on Facebook.

Apart from special parking spots for people with disabilities or who are pregnant, the notion of reserved parking spots does seem at odds with the idea that “all men are created equal,” as set forth in the U.S. Declaration of Independence, or “first come, first served” and “dibs,” set forth by restaurants and schoolyard playgrounds, respectively. It’s a nice gesture, but there may be more substantial things that institutions can provide for the well-being of junior enlisted airmen. Keep in mind that Tinker was the same base where a colonel told an aircrew they failed America because they nixed an unsafe training mission.

“I can’t express to you the level of disappointment I have right now,” Col. Gary Donovan, the commander of the operations group for the 552nd Air Control Wing, told airmen in July after they declined to violate Air Force safety regulations to fly a training mission aboard E-3 Sentry Airborne Warning and Control System (AWACS) jets.

If you spend any amount of time tuned into an Air Force social media forum, you’ll find that parking spaces are not what many airmen are calling for to make their lives better. Instead, you’ll see calls for making the Air Force Personnel Center less of a pain in the butt; hiring more aircraft maintainers so they’re not constantly burnt out; and making leadership less toxic.

“I’m a big proponent of treating junior enlisted better, but this just seems kinda stupid,” wrote one commenter on Reddit reacting to the parking spot news.

It’s not all bad though. Now lower-ranked airmen won’t have to wait so long to stock up on the energy drink of their choice before returning to a 15-hour shift at an undermanned shop. Go Air Force.