The Air Force said this colonel was an incredibly toxic leader. Then she was promoted to one-star general

Despite the investigation’s damning conclusions, Jennifer Grant was promoted to brigadier general on July 2. 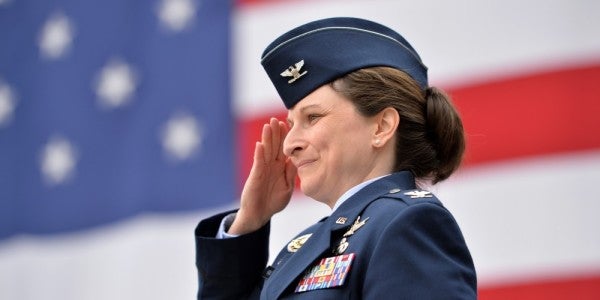 Air Force Brig. Gen. Jennifer Grant created the most toxic command climate that investigators had seen in decades when she oversaw the 50th Space Wing at Schriever Air Force Base, Colorado, according to a redacted copy of an Air Force Inspector General report.

A colonel at the time, Grant berated her subordinates both publicly and privately so frequently that the people under her command were terrified to give her any bad news, according to the October 2019 investigation, which was obtained by Task & Purpose.

Grant frequently reduced people to tears, caused many of her subordinates to leave, and one person whom she often clashed with later died by suicide.

“Witnesses, particularly Col. Grant’s immediate staff, credibly described the environment as one in which Col. Grant failed in her responsibilities to pay attention to the welfare and morale of her subordinates, and failed to cultivate a climate of teamwork, cohesion, and trust,” investigators wrote. “Further, witnesses described failures in effective two-way communication and instances of a lack of self-control when engaging subordinates.”

Despite the investigation’s damning conclusions, Grant’s career has flourished. She was promoted to brigadier general on July 2 and is now assigned to Air Force headquarters at the Pentagon, said Air Force spokeswoman Ann Stefanek.

The Air Force did not provide a comment about why Grant was promoted in light of the investigation.

“I remain gratefully committed to serve, lead, and grow, and remain dedicated to our people and our mission. I am humbled to serve with the finest air and space professionals the world has ever known,” Grant said in a statement to Task & Purpose on Wednesday.

Grant led the 50th Space Wing from June 30, 2017 to June 24, 2019. Investigators concluded that during that time, Grant repeatedly violated Air Force standards by lashing out at her subordinates, including:

“Col. Grant created an environment infused with fear and intimidation, which stilted communication and reporting, and undermined the welfare and morale of her subordinates,” the investigation said.

“In doing so, the AFSPC/IG [Air Force Space Command Inspector General] determined the conditions Col. Grant created were the worst the IG team had seen in 20 years.”

Grant also disputed the airman’s account that she had got right in the airman’s face and said, “Do you know who I am?” according to the investigation.

“The irony is not lost that in wanting to be seen as caring for the welfare of a subordinate, REDACTED, Col Grant failed to tend the welfare and morale of another subordinate,” according to the investigation.

Investigators interviewed more than 300 witnesses to put together a picture of the toxic command climate under Grant. None of those witnesses appeared to be trying to make Grant look bad because she made them work hard and held them to high standards, according to the investigation.

Instead, they consistently portrayed a command climate in which they had to endure abuse from Grant, the investigation says.

“Her leadership is like being in an abusive relationship or marriage,” one witness told investigations. “You’ll do whatever you can to not make her mad, not take another face shot. You’re constantly walking on eggshells.”

Another witness described working for Grant as “the worst year of my life.”
It got to the point where he would have a pit in his stomach any time he got an email from Grant or heard that the Wing was trying to reach him, the witness told investigators, adding that nothing he did seemed to be good enough for Grant.

“I drank [alcohol] fairly heavily my second year of command,” he told investigators. “It was how I coped with how miserable I became. It was always in the evening, I never came to work drinking, but, I know I wasn’t the only one … I drank as a coping mechanism, I was miserable … I didn’t spend a lot of time with [my family]. And I would tell you I probably, I probably cried weekly. Usually in private, usually in my home, uh once or twice in my office with the door closed.”

Related: ‘If he was on the battlefield, he probably would’ve been shot in the back’— Inside the toxic command of Air Force Lt. Gen. Lee Levy