Maj. Christina Hopper’s family is about as military as it gets. The legacy of service in her family made being... 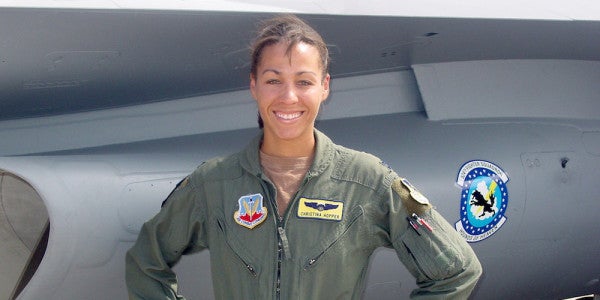 Maj. Christina Hopper’s family is about as military as it gets. The legacy of service in her family made being a military brat a key part of her identity. Born in Norway while both her parents were stationed there with the Air Force, Hopper didn’t move to the United States until she was 4 years old.

Her trajectory, following in her parents’ footsteps to the military, was normal, expected almost. But Hopper’s story deviates from the typical military brat-turned service member in that she didn’t only join the Air Force, she became the first black female pilot to fly a fighter jet in combat. And although Hopper is considered a trailblazer, she told Task & Purpose that she felt like one of the crew from day one, and that the uniform always came before race and gender.

An Iraq War veteran, Hopper separated from the active-duty Air Force in 2008 with almost 1,000 hours in the F-16. Today, she is a mother of three, military spouse, and continues to serve in the Air Force Reserve as a T-38 instructor, where she trains the next generation of fighter and bomber pilots. Hopper continues to enhance her legacy through the “Vance Supergirls,” a mentorship group for female aviators.

Related: This is the future of the Air Force Reserve »

Recently, she sat down with Task & Purpose to talk about her inspiring journey and the challenges she faced in her military career.

What made you decide to join the military?

I grew up in a family where both my parents served in the Air Force. I was sort of around aviation my whole life. When I was a junior in high school, my mom asked me if I wanted to go to the academy. Then it came time to get an appointment letter from a congressman, and I told her I don’t think I want to go into the Air Force. I got a scholarship to the University of Texas — a partial swimming scholarship and then eventually an ROTC scholarship, but I started with just the academic scholarship. I saw the familiar blue uniform and just wanted to ask them some questions. I thought, I could just sign up, and then if I don’t like it, I’ll quit.

But you didn’t quit. So what made you choose flying specifically?

I got to my junior year in college and my commander asked me why I didn’t put in an application for pilot training. And I thought maybe you had to have an engineering degree, and I was psychology. But she just said all you have to do is get a degree and your commission. So that was the course I started pursuing.

So I prayed about it, and then I had this very vivid dream. I felt like God was telling me that I should not only go apply, but that I would fly fighters. I didn’t have any flying background or aviation experience, but as I went through training, the doors started opening. There were a lot of people who helped me along the way to get ready, so I did well enough in my class to get F-16s and that was how I got my start.

At the time, you were one of two African-American women among only 50 total female pilots. How did that impact your early career?

I think the impact was that female pilots were so new that there were logistical-type challenges. But as far as fitting in socially, I was very surprised. I think a lot of female pilots will say the same thing, that the guys accepted us. And there were maybe some guys who were opposed, but I didn’t see that. Our challenge was equipment, making sure that our equipment could be personalized for females.

Did you ever experience any sort of discrimination in the Air Force?

I heard rumors about what it could be like, and that made me a little nervous. But I felt, in my community, that it was like a fraternity or a brother and sisterhood. The guys were looking out for me. I didn’t get that sense of feeling like an outsider. From my perspective, I think it was very positive.

You flew more than 50 combat missions while on active duty, how was that?

While I was on active duty, I did one deployment to Iraq. It started September of 2002, during Operation Southern Watch, flying missions out of Kuwait. That quickly led into Operation Iraqi Freedom. It was supposed to be a three-month deployment that ended up becoming five-and-a-half months. We were part of the initial push, supporting the Army and Marines.

What did your missions look like? Do you have any that stick out in particular?

Basically we were carrying air ordnance in order to protect our troops. I didn’t have any super scary incidents. But during the first three days, we had one of the worst recorded sand and thunderstorms, and when we went to the tanker, it was very turbulent. My aircraft was struck by lightning. It electrocuted my threat warning system. That day, my flight lead and I had to decide if we would press forward to the target, and we decided we would. We were able to drop our bombs on a road intersection with a bridge that was a key in a fight between Army troops and the Iraqi Republican Guard. It was one of those missions where you could feel the positive impact that you’re making from the air.

What were some of the biggest challenges for you personally being a female fighter pilot?

It’s crucial when you’re the first that you perform well. The question is, Is she going to be competent? And I don’t know if it was my perceived scrutiny, or if it was actual scrutiny, but I felt the need to do well. A little bit later in my career, having children while on flying status became a challenge as well though.

Is it hard to juggle both your career in the military and having a family?

When I first left pilot training, I had an eight-year commitment. I met my husband shortly after pilot training and we both had felt like I shouldn’t have children until my commitment was up. When we met I was 25, so I’d be having children when I was 31 or 32. It’s something you really have to think about. Eventually my husband and I decided that I should leave active duty and go into the Reserves, and that family piece definitely played into that.